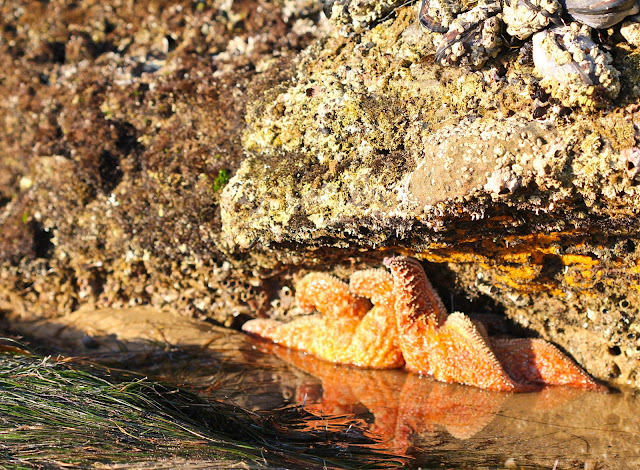 Yesterday afternoon, my husband and I hung out down at one of our favorite local beachs, Crystal Cove State Park just north of Laguna Beach, and the tide was way out because of the full moon cycle. We saw these amazing starfish tucked under exposed reef in the tidepools, but didn’t have a camera. This guy was about a foot long. 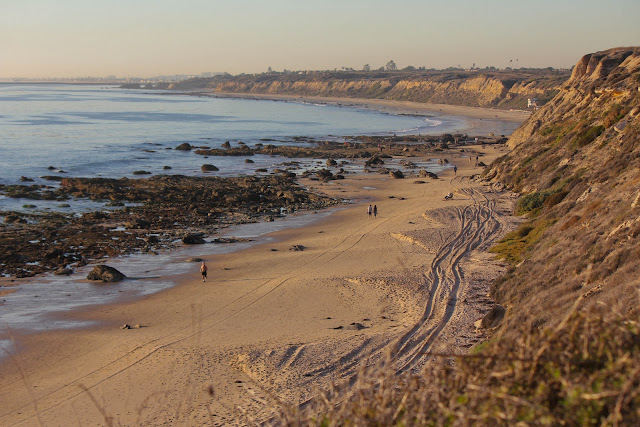 So I ran down there this afternoon and shot these photos. Not to rub it in, but we’ve had nearly a month straight of temperatures in the high 70s and low 80s and nearly cloudless skies. The winter light is gentle and makes everything glow. 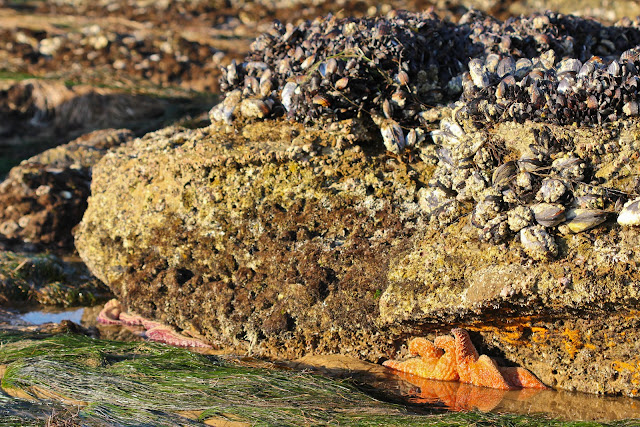 This is what they looked like from about ten feet away. See the two maroon ones on the left? 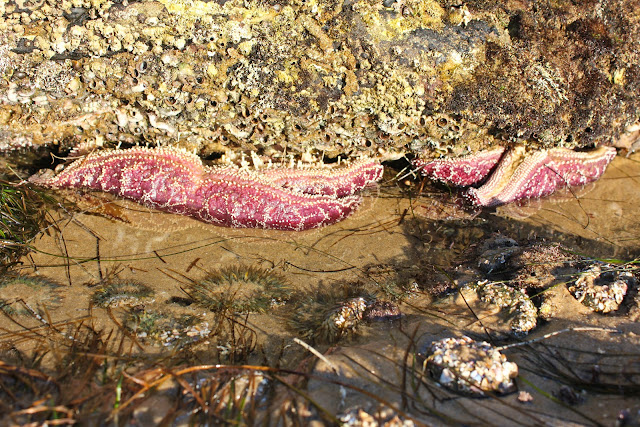 While we were hanging out reading our books, we noticed a family of four exploring the tidepools. To our horror, they started prying out the starfish and other sea creatures off the reef, holding them up in the air as they took photos of themselves with their various treasures. They would let out loud “whoops” every time they found another creature to disturb. (I was fuming inside…) 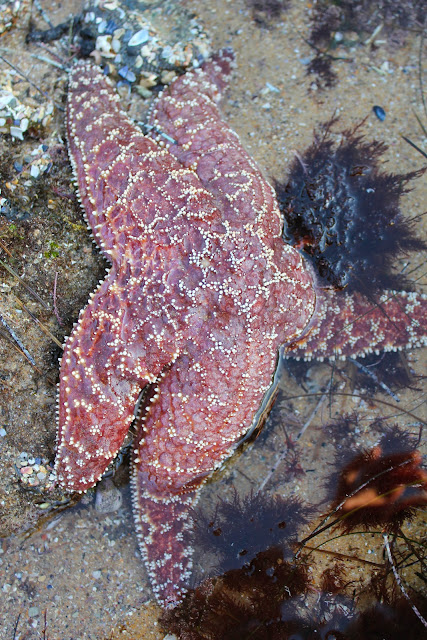 It’s illegal to remove sea life such as star fish and shells. We discussed walking over and telling those people to leave the animals alone, but decided to ignore them because at least they were returning them to the water. Next time, however, we aren’t going to be so tolerant. (Here’s a starfish where you can make out the “star” shape better.) 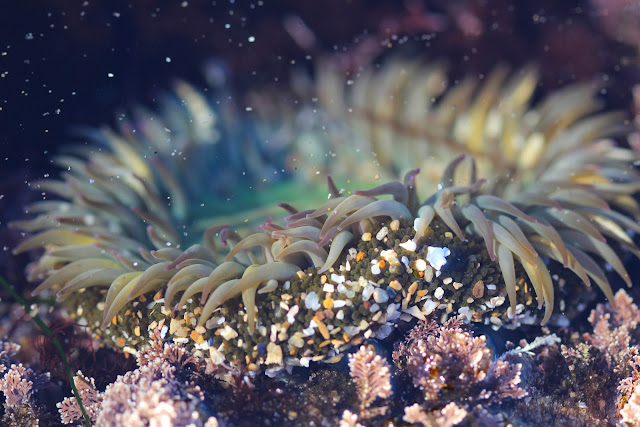 Those obnoxious tourists also were tramping all over the tide pools in heavy boots, most likely crunching the gorgeous sea anemones, such as this one, under foot. (Yes, they were driving us crazy, and we now regret not intervening and telling them to knock it off!!!) 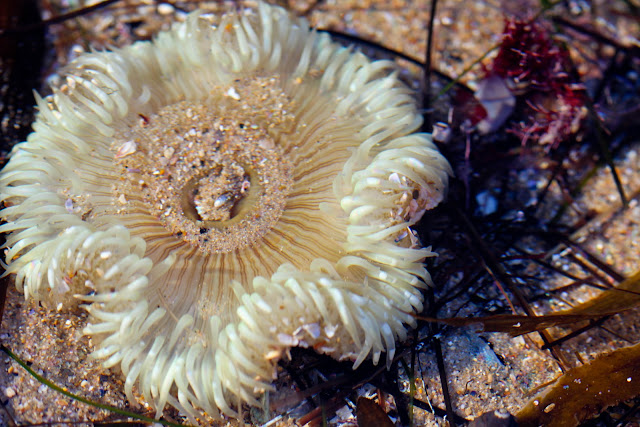 Crystal Cove recently opened small cottages right on the sand for rent to the public, so there are quite a lot of visitors from around the country and world–many of whom don’t seem to read the signs telling them to respect the ocean creatures. 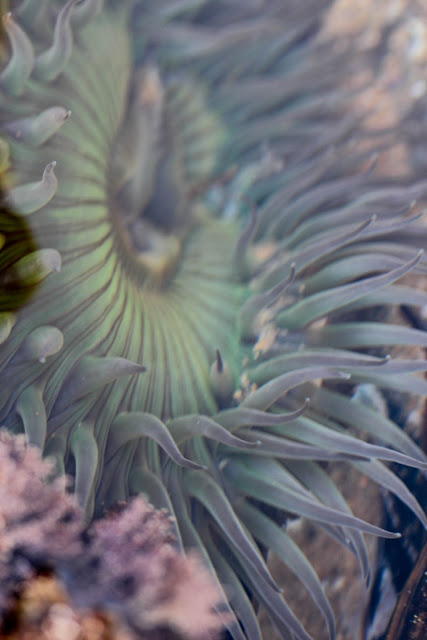 I only had about a half hour to shoot the sea stars, but couldn’t help snapping more shots of the tide pools and birds. It was amazing how much wildlife is concentrated in such a small area. Crystal Cove State Park extends several miles between two cities, Laguna Beach and Newport Beach, and has hundreds of new McMansions built directly above it the hills. But when you are down at the beach, you feel like you are in a remote paradise. 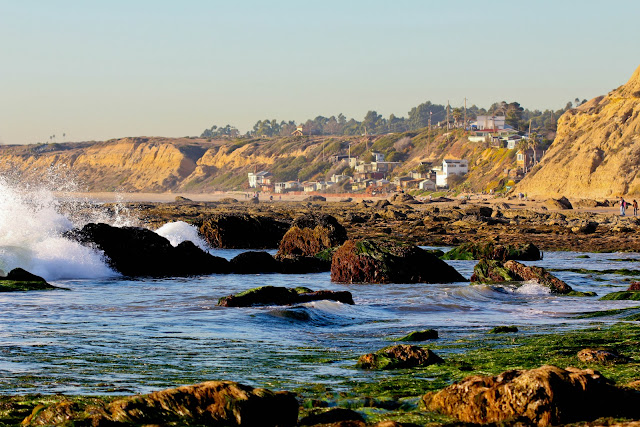 Nestled under the cliffs in the distance are the rustic beach cottages you can rent through the state park. They are actually reasonably priced, but hard to reserve. Imagine sleeping with the waves breaking just yards away, and having several miles of open beach to stroll and explore in either direction. 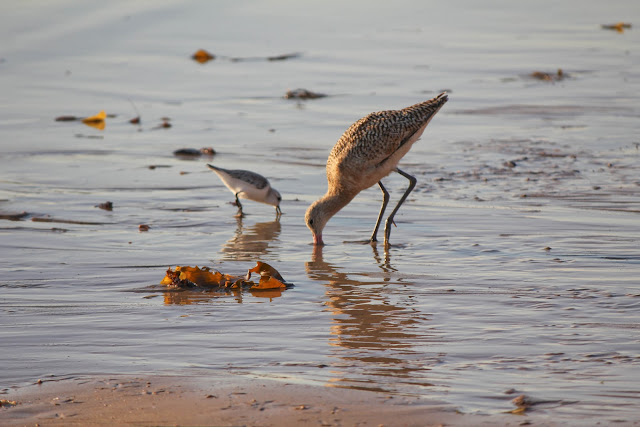 Another reason to visit in winter are the sea birds, who migrate from the north to hang out along the shoreline. This is a Marbled Godwit (right) and Sanderling (left).  When I entered the park, the ranger told me he had been watching a whale breeching just offshore. I spotted several dolpins, but no whales. In recent days, a pod of Orcas was seen off this coastline! 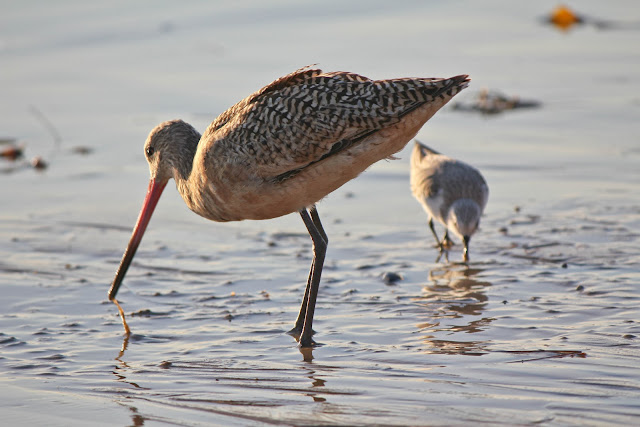 The migrating sea birds’ plumage is especially beautiful this time of year. You can tell Godwits because their longer beaks curve ever so slightly up toward “God.” 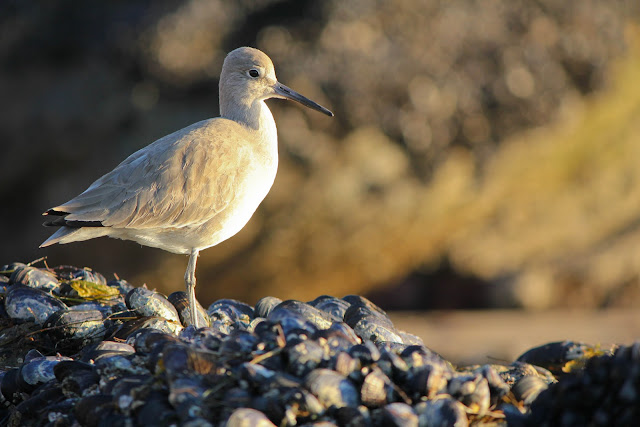 Not to be confused with the Godwit, this is a Willet, which has a slightly shorter beak that goes straight out. It’s also relatively dull in contrast… 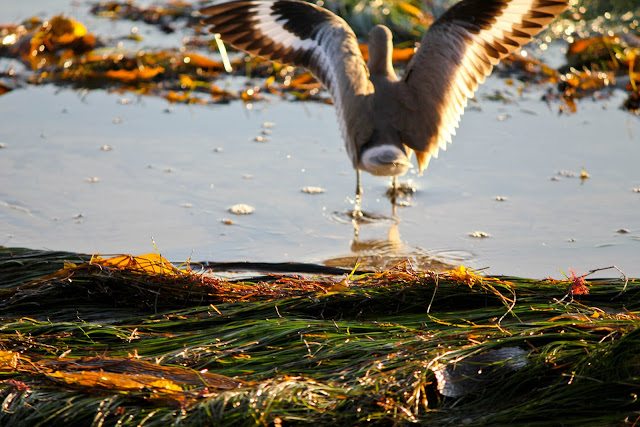 ….at least until it opens its wings. 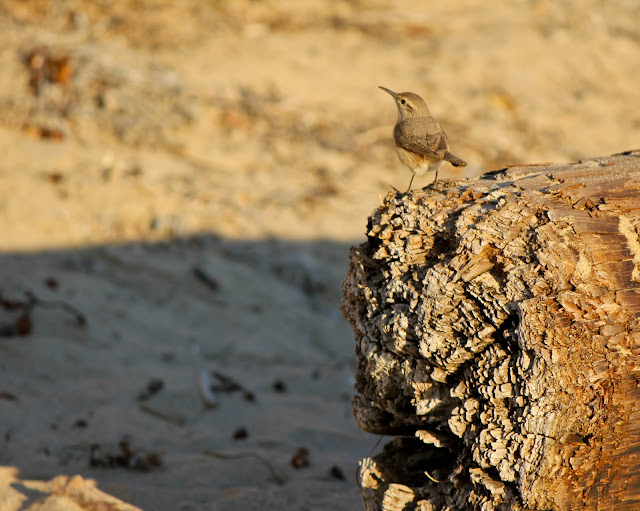 Directly above the cliffs is an entirely different habitat, filled with coastal scrub. Crystal Cove is filled with the endangered California Gnatcatcher, a tiny, shy, blackish birds whose call sounds like a mewing kitty. If you listen, you can hear them. This happens to be a house wren. 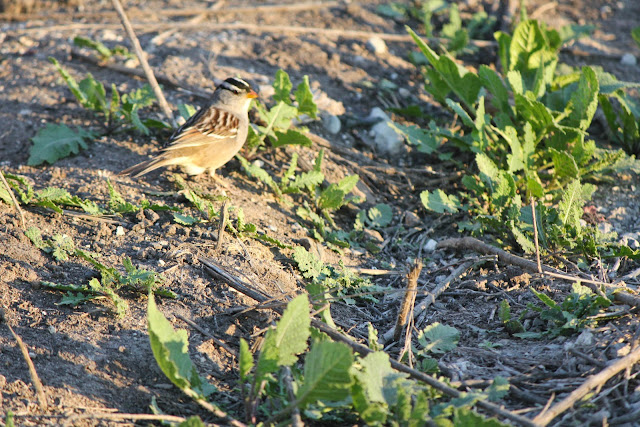 This is one of my favorite birds, the White-Crowned Sparrow, which hangs out in small flocks only in winter. They have a beautiful, almost eerie song. Can you see the white stripes? 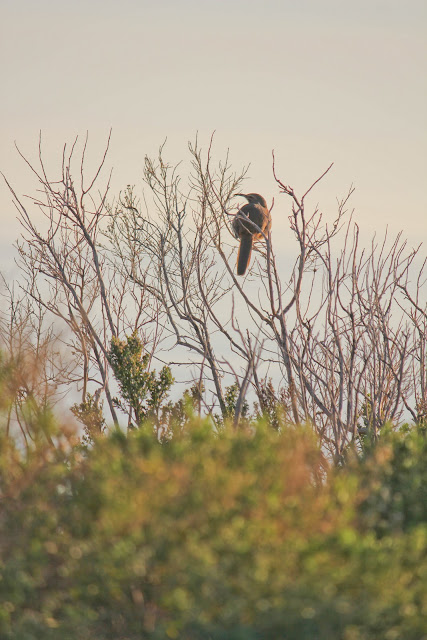 On my walk back to my car, I was hoping to spot one of these guys, the California Thrasher. Not only do they have that distinguishing down-curving beak, but they are a larger bird who loves to sit on top of large bushes, especially at dusk, and sing and chatter away. They are mimics, like Mockingbirds, and are fun to listen to. 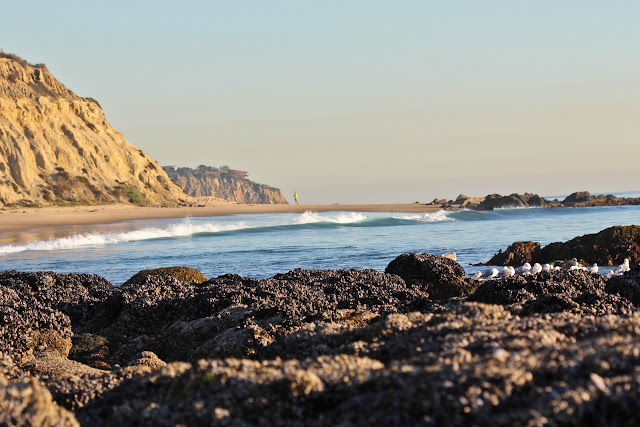 Can you believe I saw all that gorgeous wildlife within just a short hour at Crystal Cove? There are also Bobcats–which look like very large cats and are harmless to humans–who are spotted frequently.
So if you can swing it, take a day trip to visit Crystal Cove or spend a night or two at those quaint cottages. Just make sure to treat the local residents with love and respect!
Here’s a charming book about the history of Crystal Cove and the quintessential California lifestyle
(Click on link or image to buy)

Crystal Cove Cottages: Islands in Time on the California Coast