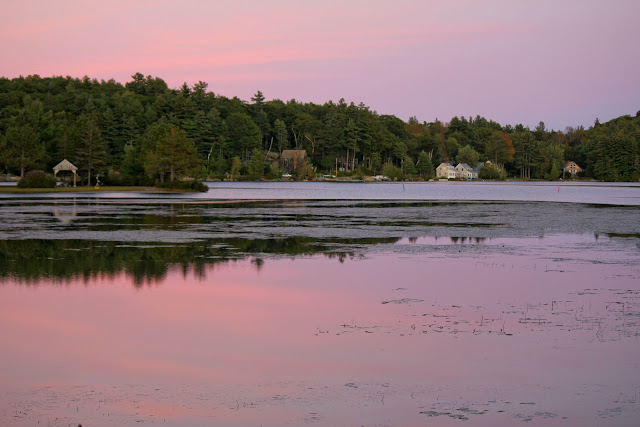 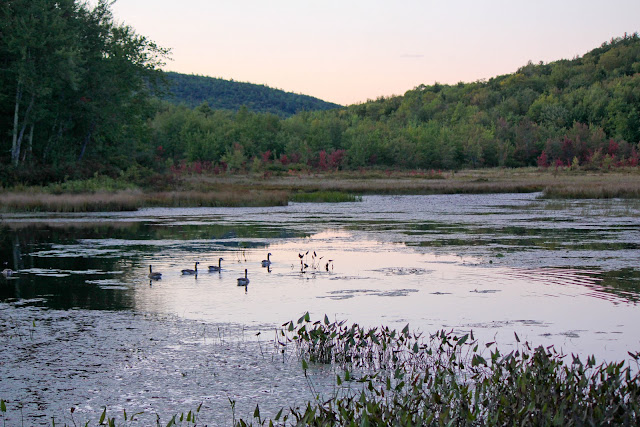 Only in the past couple years, we have had Canadian Geese on the lake. I love them. Their honking echoes over the lake, and I think they are as elegant as swans. However, not everyone likes them. Apparently, they are all over the northeast, and poop everywhere and are considered pesky. 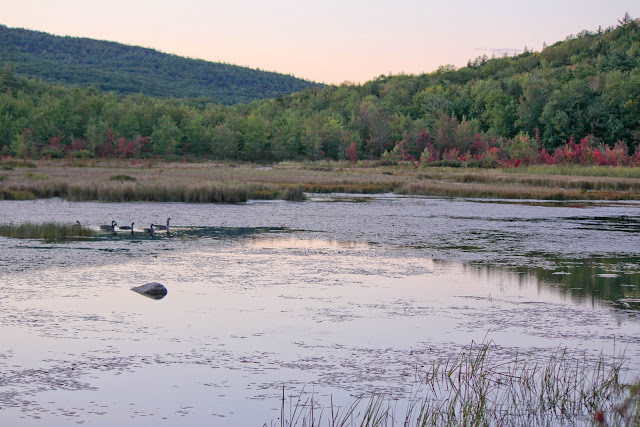 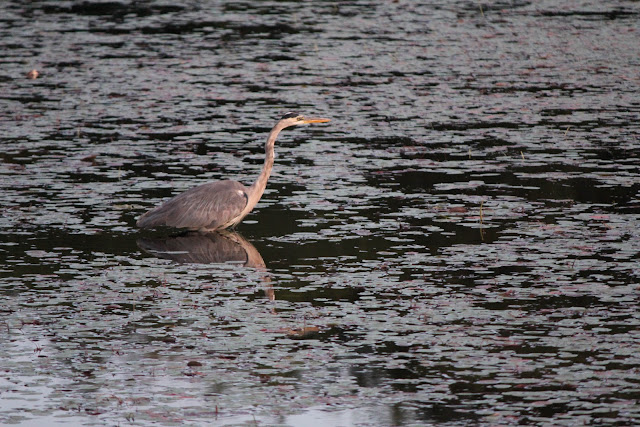 There’s also a Great Blue Heron hanging out in the marshy part of the lake. My zoom isn’t very zoomy. 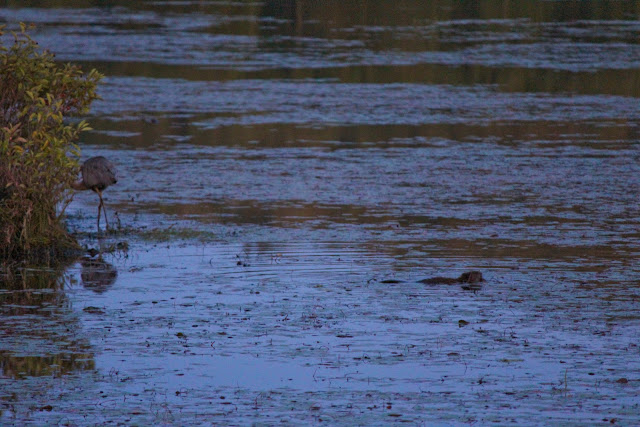 We always check out all the beaver damns, hear them slap the surface of the water while out on the lake in the evening and find all their fallen trees, but rarely see them. My niece, Natalie, a junior in college, spent the summer working with a biologist woman in Moab, Utah, diligently collecting all sorts of data about the beaver population there. But she didn’t see a single beaver the whole time. I took this photo in honor of all her hard work!! (The beaver was just floating, munching something its hands. That’s the Great Blue Heron on the left.)
Warning! Like a lot of “nature” stories, this one turns grim at this point… 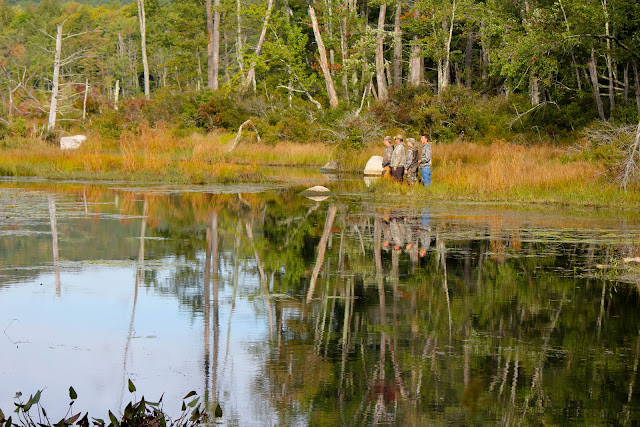 The next morning I woke up to the sound of loud cracking sounds. Boom. Boom. Boom. What the heck was that?? I’m from the Bambi generation. I still consider it a breathless moment when I see a giant Buck standing in the middle of the road at dusk in my neighborhood. I don’t dig guns and hope I never have to kill an animal. Yes, sentimental, bleeding-heart, emotional, illogical. So shoot me!
Anyway, I grabbed my binoculars and camera and marched down to the marsh–a coat over my pajamas, a crazy Californian. 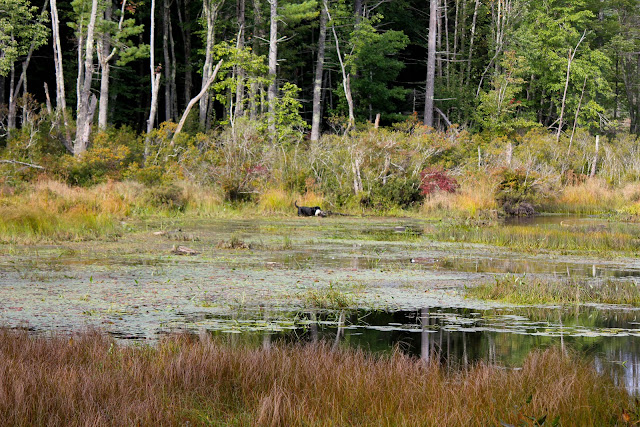 There they were. Hunters! I don’t think I had even seen them in action before. I started snapping photos, hoping to intimidate them if they were poachers or something. Was this really legal? These giant, nearly tame birds were just floating around the lake–where’s the sport? 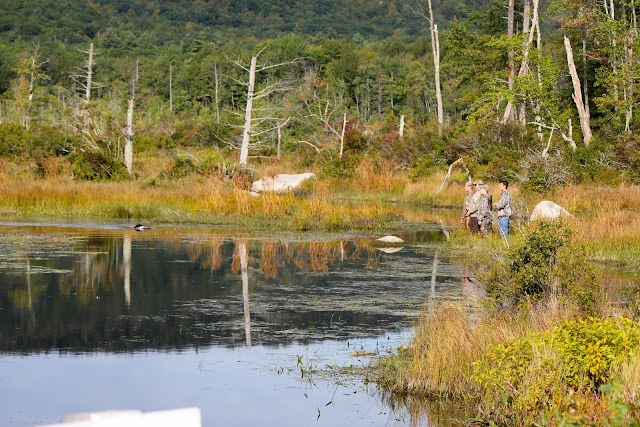 The older hunter guy walked up to me, and without me saying a thing, started explaining that these were “nuisance” geese, and that it was totally legal to shoot them. I did ask what they did with the birds, and he told me they smoked them and ate them. I have to admit my indignant stance softened a bit as I watched their beautiful yellow and black labs swim and run through the water, collecting the dead birds. 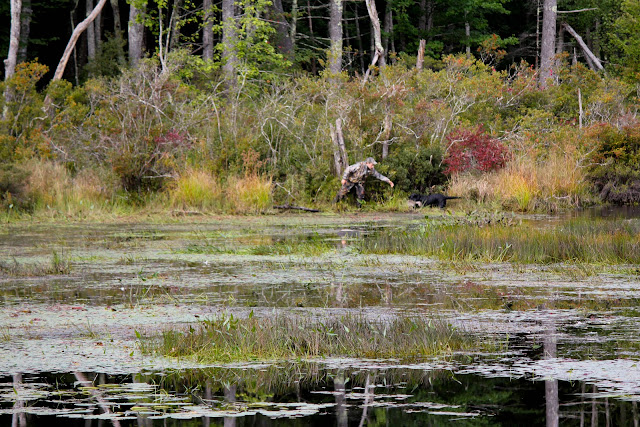 The hunter guy then explained that he had the dogs go back over all the marsh area to check for injured birds. He seemed like a very responsible hunter. Sure enough, the dogs fished out a couple more compromised geese.
New Hampshire is such a different world for us. A lot of people from this rural area are struggling just to make a go of it. I get that.
But the geese who survived took off. Not a sign of them now.
I hope they are heading south, and return next year.
No easy answers.
I’m still with Bambi.

2 thoughts on “Live Free or Die”