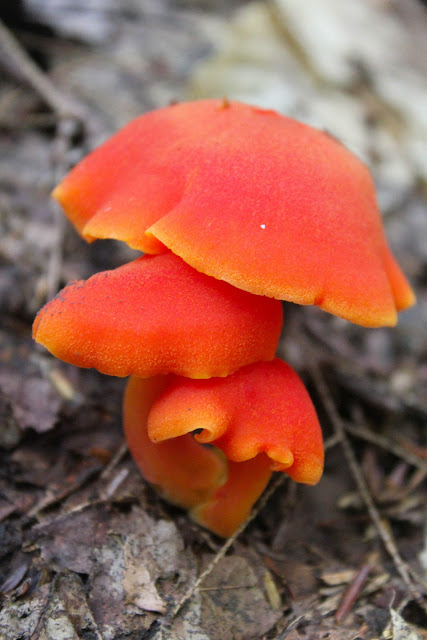 If I lived in New England year-round, I’m pretty sure this would be a new obsession. Mushrooming. Or Mycology. My husband and I had so much fun discovering different fungi when we traipsed through the woods near his family cabin in southern New Hampshire this week. 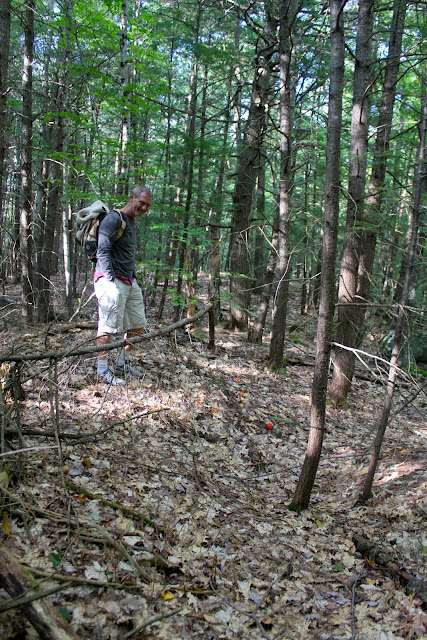 It was crazy! These things were popping up all over the place. If you look closely, I think you can see some of them here, orange and reddish ones here. The woods were matted with a spongy layer of oak, birch and other leaves, which obviously creates ideal conditions for fungi. They come out after it rains. 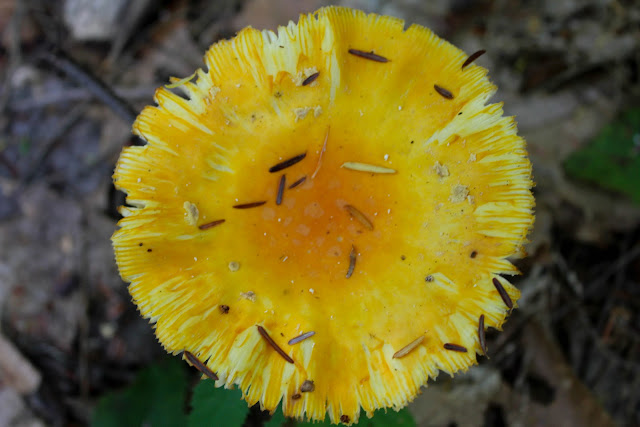 Although the popular morels come up in spring, autumn is also prime shroom season. I know almost nothing about mushrooms, and will only share what I picked up from my new pal, Dr. Herbert S. Zim, and some mushroom blogs. (In southern California, I only see mushrooms in over-watered lawns.) 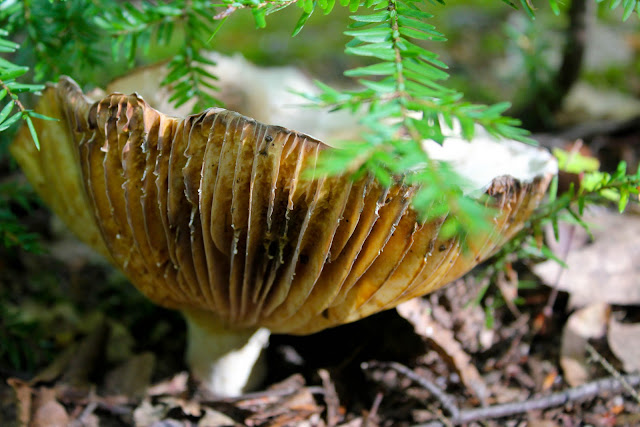 Besides the fun of hunting for these little plants, the other joy is eating them. The trick is telling the difference between which ones to sautee in garlic and butter, and which ones to toss in the trash. One wrong choice could be deadly. DISCLAIMER: I AM NOT ENCOURAGING YOU TO EAT MUSHROOMS YOU FIND. Most experts seemed to like Audubon’s Field Guide to Mushrooms. 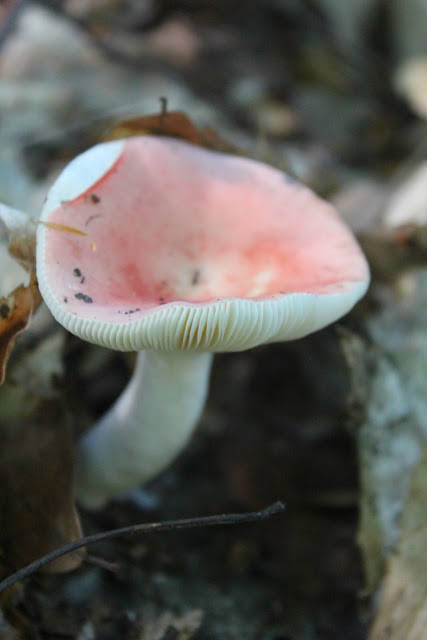 Most of the mushrooms we found and photographed here are probably poisonous. According to experts, there are the “Foolproof Four,” which are easy to identify and have few poisonous lookalikes to throw you off. They are morels, chanterelles, puffballs, and Chicken of the Woods. The best way to not poison yourself is to join a club with an experienced guide. 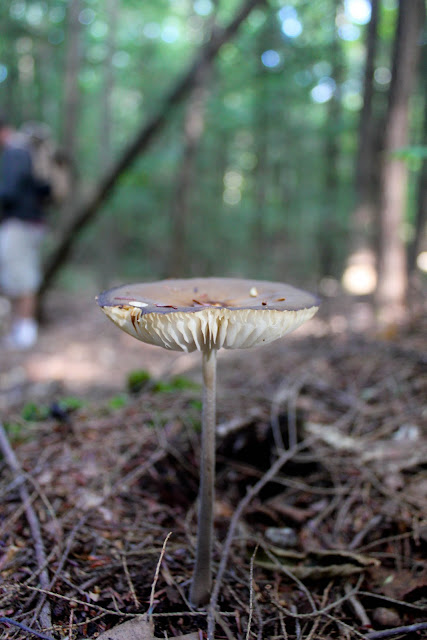 The deal with eating mushrooms is that you can’t just be pretty sure; you have to be 100 percent certain. There’s a reason some mushrooms have names like Death Cap, Destroyer Angel and The Angel of Death. 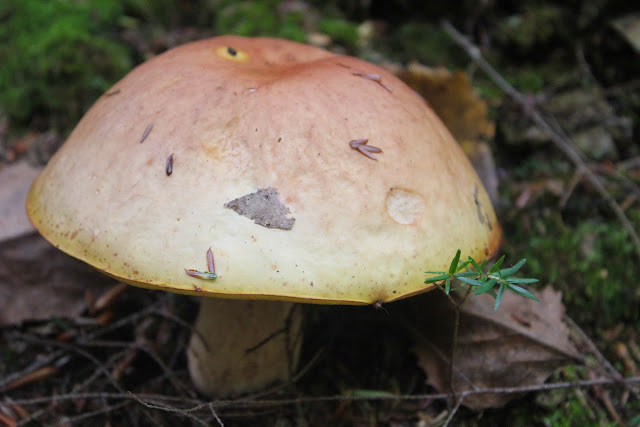 I like the magic fairy allusions of mushrooms, and the classic toadstool imagery. Did you know toadstool is the name for mushrooms that are poisonous? 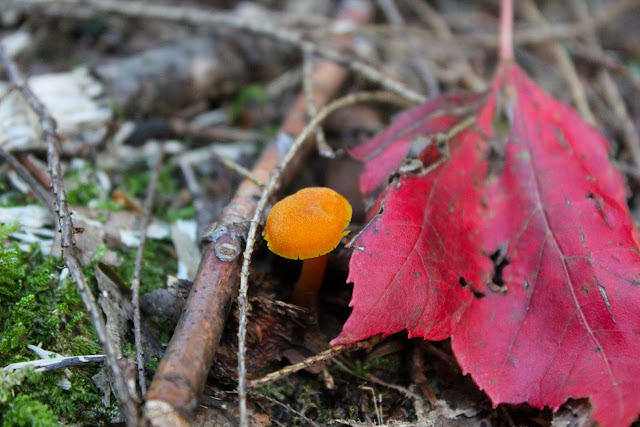 Besides the proliferation of mushrooms we found, I was amazed by the variety of colors. 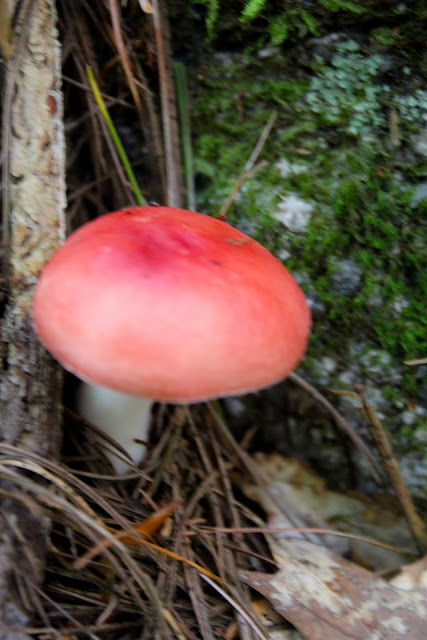 Lots of these bright red ones. Mushroom poisoning often is deadly because symptoms don’t show up until ten or so hours after eating them–when it’s too late to do anything about it. 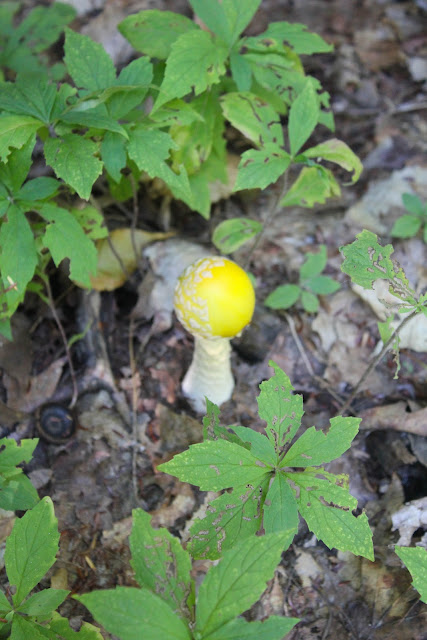 How about this one? It was almost four inches tall. 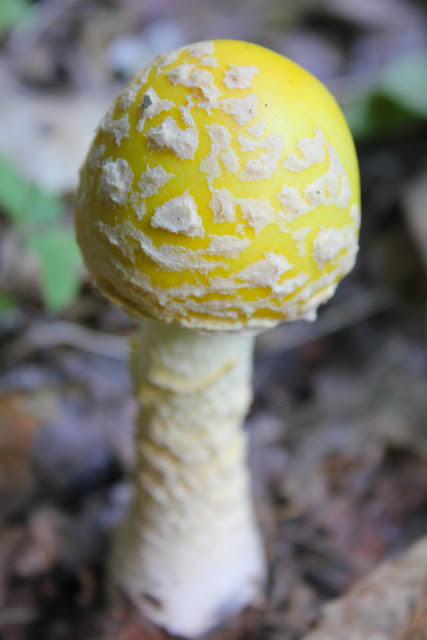 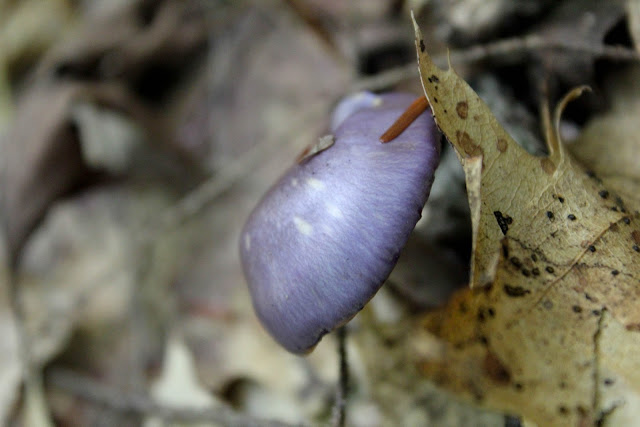 Found a couple purple ones. 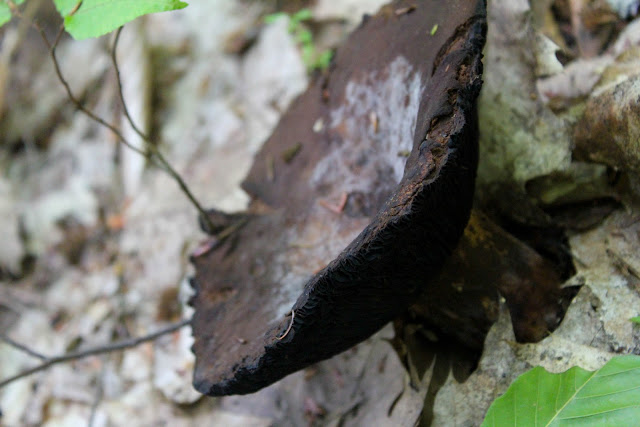 Loads of black, slimy looking mushrooms. I think most of them were just rotting, and they smelled funky. 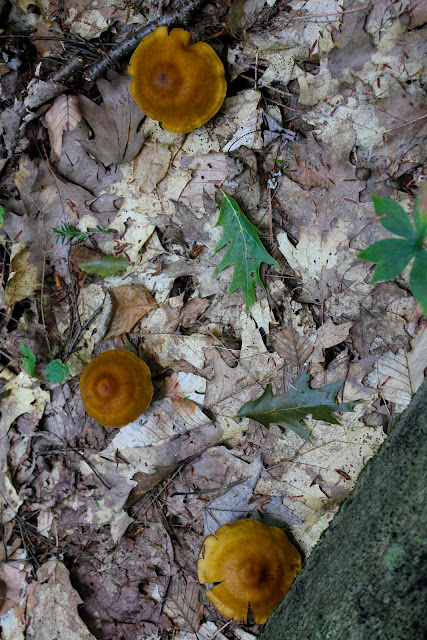 Most fungi are parasitic, and require host vegetation. 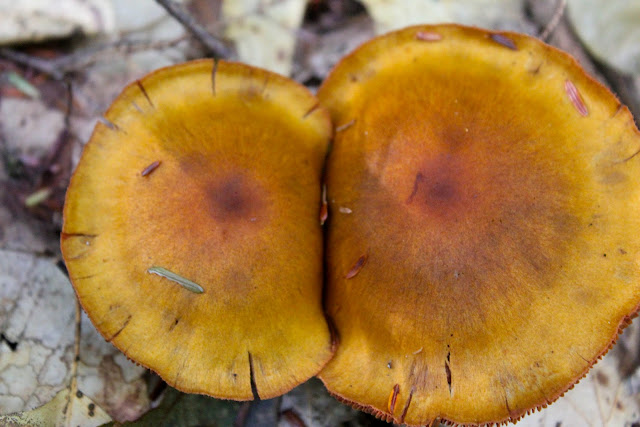 Beside hunting for delicious mushrooms that won’t kill you, some mycologists search for mushrooms that will rock your world. We are talking magic mushrooms, aka, psilocybe mushrooms. I have no clue what those look like, or whether we spotted any of those. I’m sure there are clubs to finding these as well. 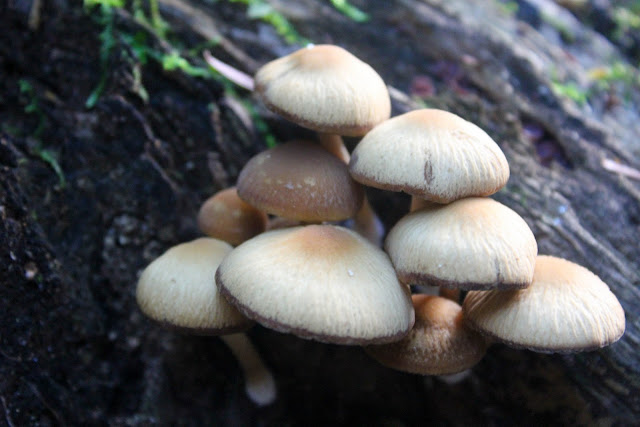 What I found interesting is that many types of mushrooms require specific plants to grow, such as one only grew on birch trees, and others only on oak trees, etc. 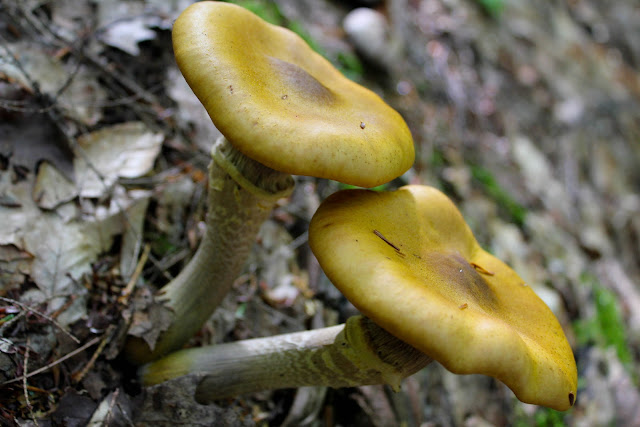 Mycologists use the color, shape, gills (the ridges under the cap), rings (around the stem), and texture to identify different types. It’s still a mystery how one genus can have both lethal and edible species. 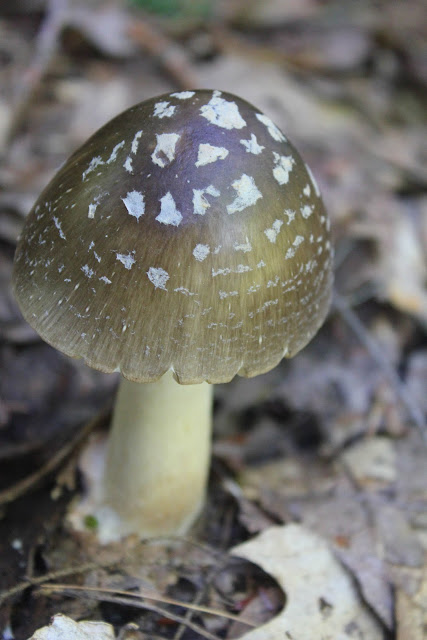 Can’t you just see the little forest fairies ducking under this guy during a thundershower? 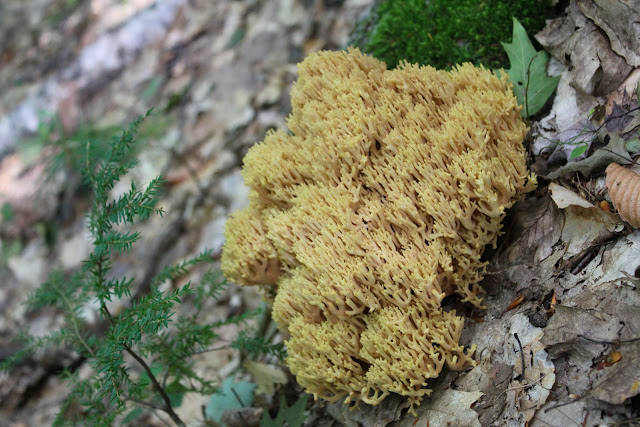 There’s loads of other wild stuff growing in these damp woods. This was the size of a football. 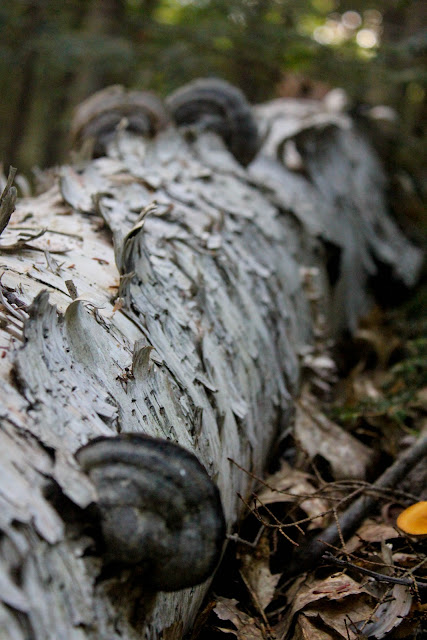 These purplish black “brackets” were growing on fallen birch tree. 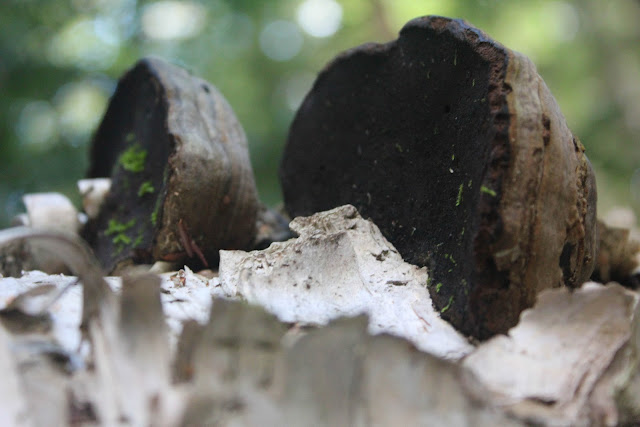 Based on that, I believe I made a positive id: They are Daldinia, a carbon fungus. (I found a lot of my information in a nifty little book that has been kicking around this cabin for years, called Non-Flowering Plants, by Dr. Herbert S. Zim, published in in 1967.) 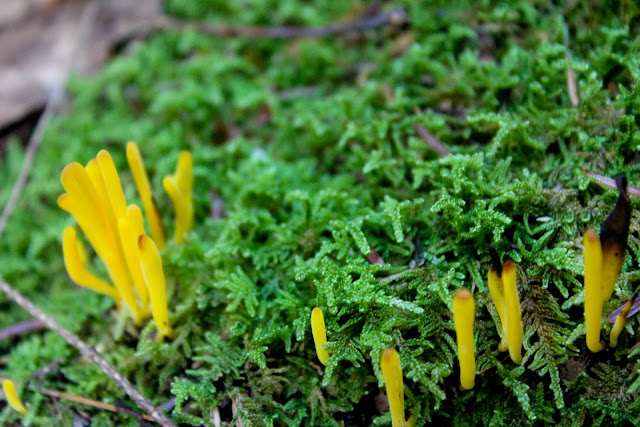 Beautiful non-flowering plants pop up out of all the mosses, too. 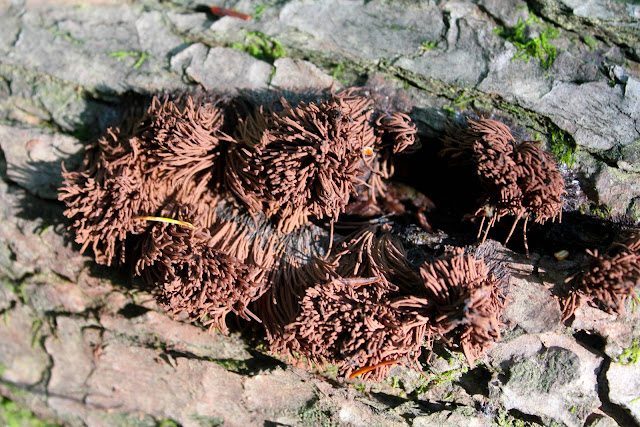 I didn’t see anything in Dr. Zim’s book that looked like this stuff. Some of these are simply bacteria, such as slime molds, rusts and smuts. It’s just fun to say those names. 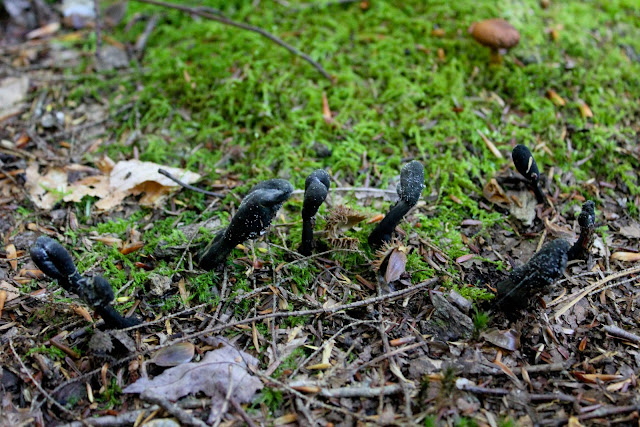 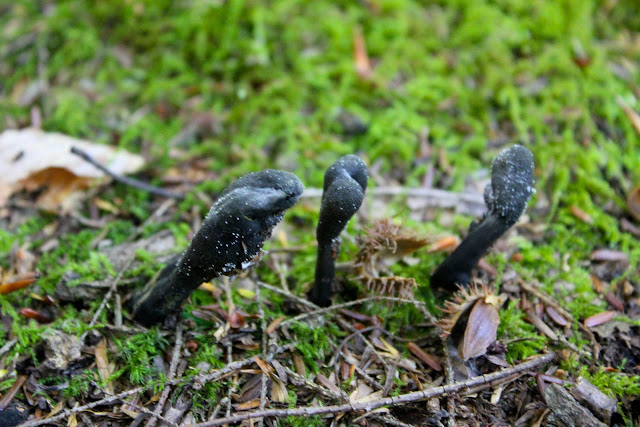 Dead Man’s Fingers. Got it. 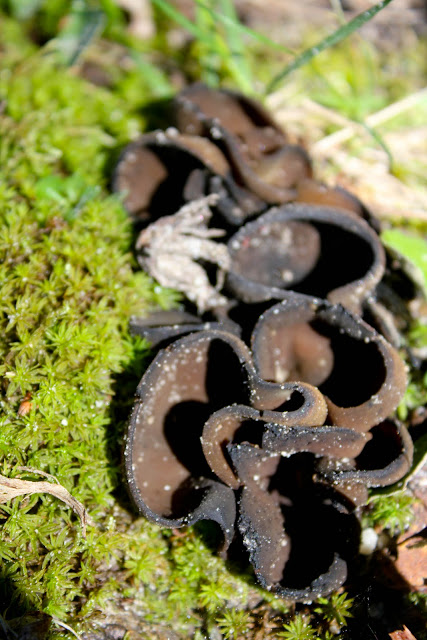 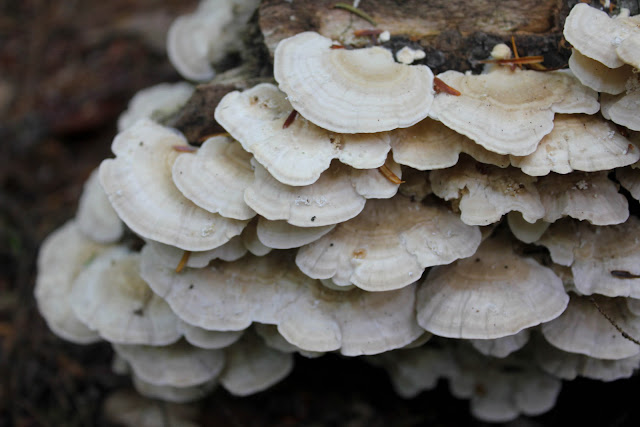 I can see that this new hobby could become pretty consuming… 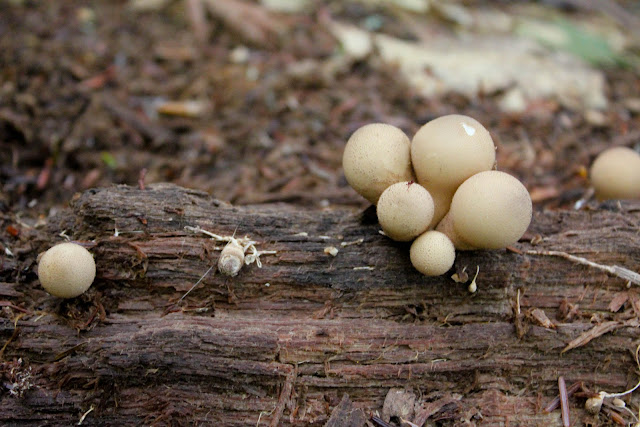 So this is one of my favorite fungi. These are puffballs, which are one of the fab four–that is, most are edible, and they are pretty much what you think they are. 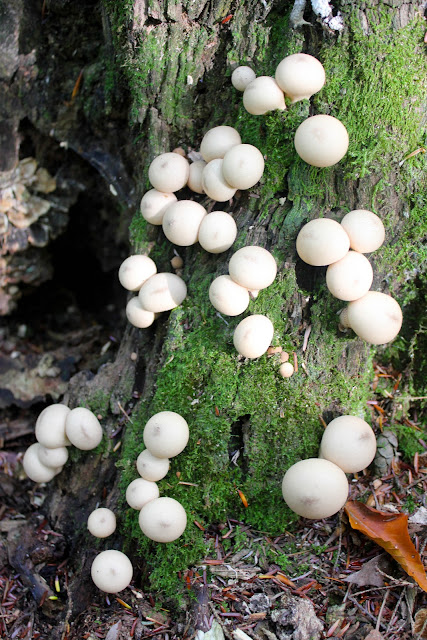 So I’m tempted to pick some, and cook them up. 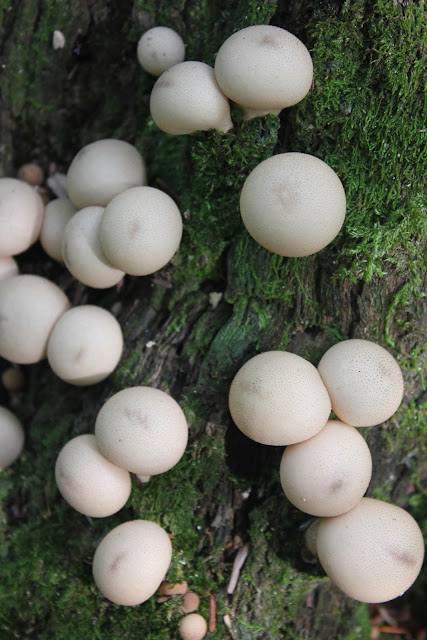 With some luck, this won’t be my last post!