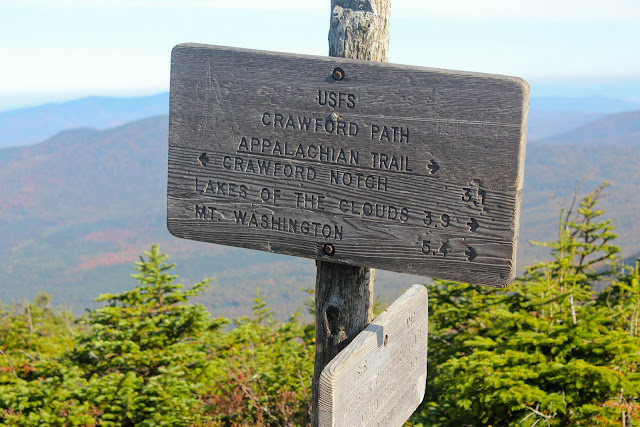 I had always dreamed of taking a vacation to the Swiss Alps where you can go alpine hiking from hut to hut, carrying only your day pack and credit card. When my husband told me you could do that type of trip up in New Hampshire’s White Mountains, I thought it sounded like a fun adventure. And we just happened to be in New Hampshire already on vacation, just a couple hours south. 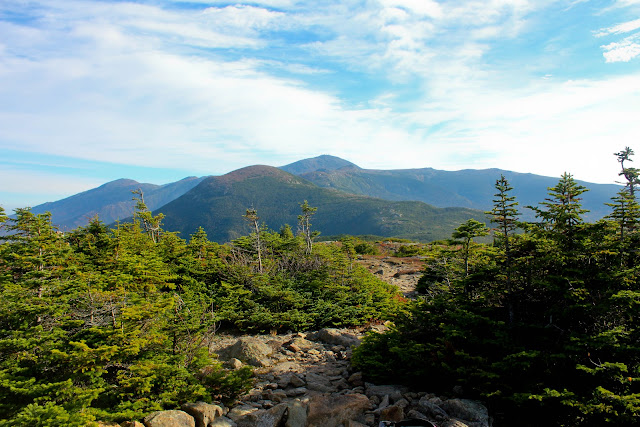 The Appalachian Mountain Club maintains about eight “huts,” or primitive lodges, which allow guests to take day hikes above timberline between the peaks of the Presidential Range. The Presidentials include about a dozen mountains all named after former presidents. Usually you need to backpack to get up to spectacular alpine habitat. 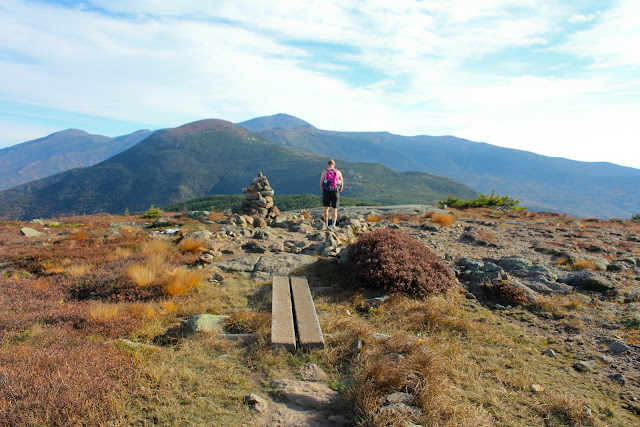 This is my husband at the top of Mount Pierce (After Franklin Pierce, our one and only prez from New Hampshire), and the highest peak in the range is in the distance, Mount Washington, the tallest in the range at 6,288 feet (The popular hut there–called Lakes of the Clouds–was closed for the season already because of extreme weather. We were very lucky. It had snowed the week before and we had unseasonably warm temperatures.)
Do you like his hot pink day pack? We had been visiting New England from our home in California, but had not intended to do a hike like this. His mom was nice enough to loan him her pack. 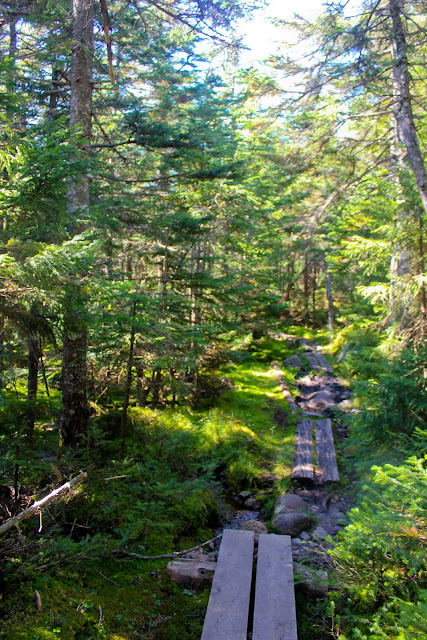 Our hike up the mountain was harder than I thought, since hiking here doesn’t involve gradual switchbacks like the west coast (where trails were designed to accommodate horses and mules). Basically, you go straight up, almost like boulder hopping. To get to our hut, called Mizpah Springs, we hiked about 2,500 feet in two miles. Pictured above is one of the flatter parts of the hike in. 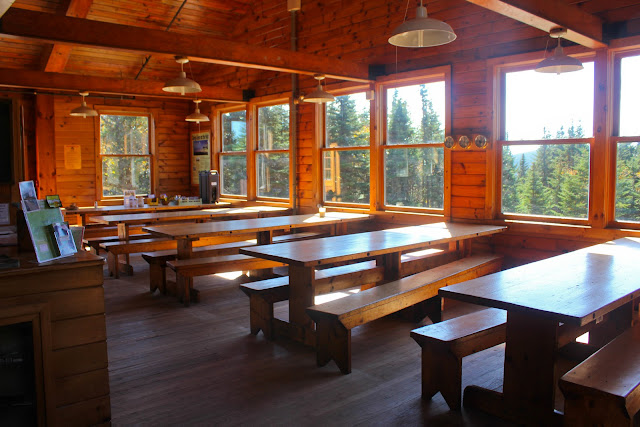 The hut was slicker than I had imagined, with a large dining hall, open industrial kitchen and separate rooms filled with bunks and sunny windows. The Saturday night before we arrived, they were full with 60 people. We arrived on Sunday, so there were only about a dozen of us for dinner. Apparently, it can get pretty rowdy. 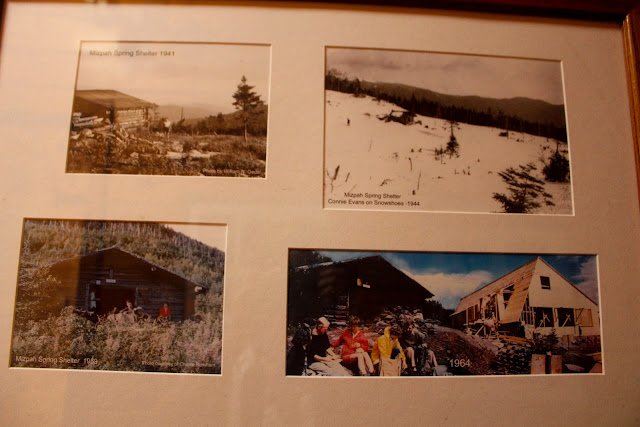 The Mizpah Springs hut originally was just a little cabin, and was expanded into the larger structure (shown bottom right) in the ’60s. It’s equipped with solar power and composting toilets. The huts cost about $100 a night per person for room and board. 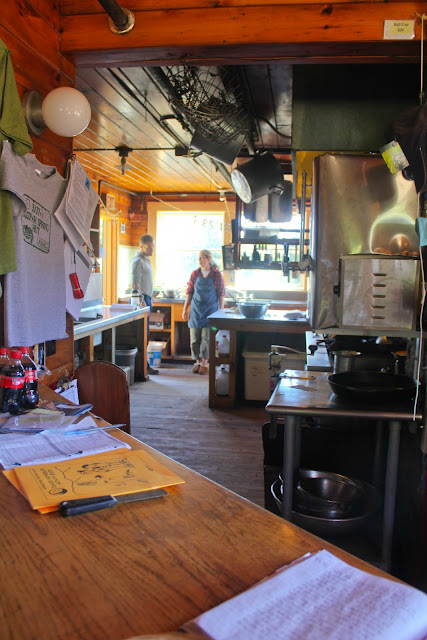 The best thing is that they feed you–well! The staff, which included five brainy, recent college graduates (Cornell, Chapel Hill,…), made home-made soup, baked fresh bread and served up a family style dinner and breakfast. They were all “naturalists,” and loved sharing their knowledge of the local fauna and flora. Part of their “dream” seasonal jobs here was packing up (and down) all the food and supplies every week. 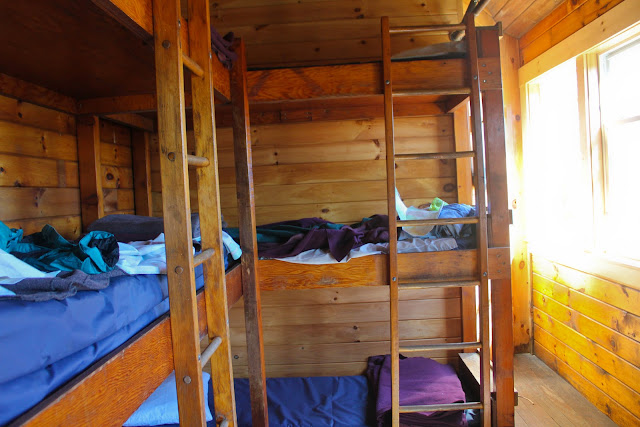 Here’s one of the sleeping rooms. I tend to romanticize things like this hut and the whole back-to-basics, communal living set-up. We had this room to ourselves, and still I hardly slept. (They provide foam pads, pillows and wool blankets; you bring your own sheet.) You’ve heard the story of the Princess and the Pea. Sadly, that’s more my reality. They sold earplugs, if that gives you an idea of what a typical night with the beds all filled with strangers (and kids) might include here. 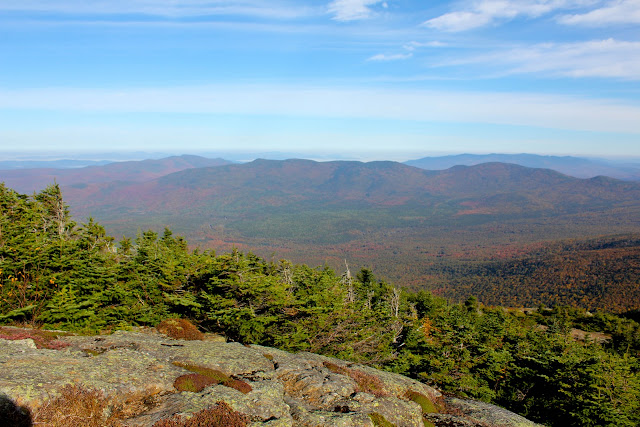 However, some things are worth the struggle. The next morning we struck out on our day hike, and climbed several miles up and down and over to another peak, called Mount Eisenhower. Once you get above treeline, the views were 360 and the path was mainly rock, stunted hemlock and fir, and alpine plants. You can see how the trees are changing color on the hills below. 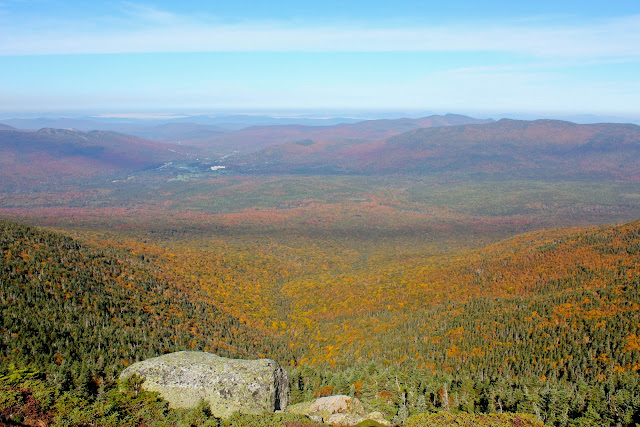 The closer trees are mainly birch, which turn yellow in the fall. The reds and oranges were the maples, which turn the earliest. I can’t image what this place will look like in a couple weeks. That little white structure in the far distance is the amazing Omni Mount Washington Resort, where we realized we could have stayed for not much more than the huts… 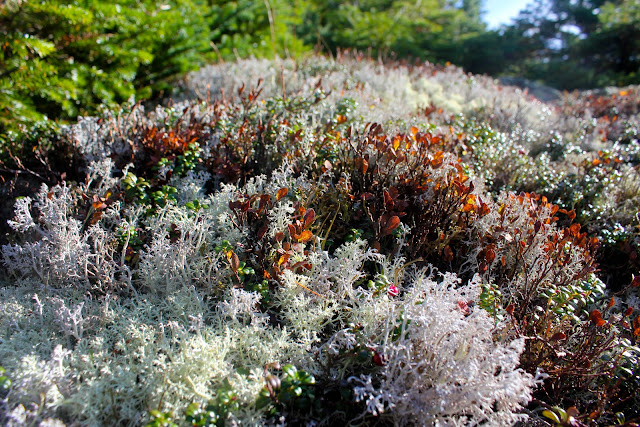 The lichen and other alpine plants mimic plants under the ocean. 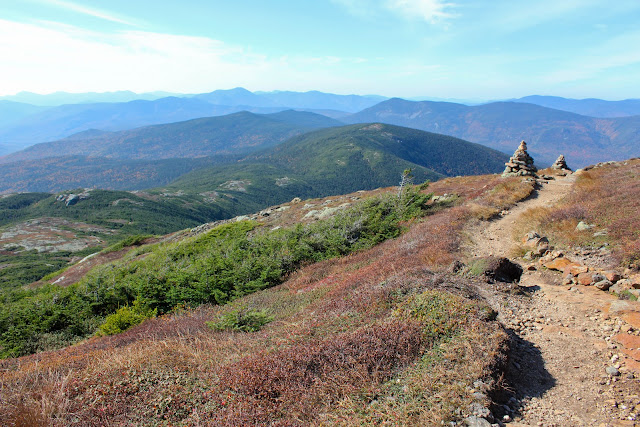 This is on top of Mount Eisenhower looking back over the ridge line we crossed to reach it. You can trace the gray rock along the top where we hiked. The whole thing had that “hills are alive” Sound of Music trekking feel to it. My husband hiked this entire range and exact trail some 30 years ago with some of his high school friends starting in Maine, and thought it was pretty cool to return–with me! I was just proud I made it to the top of one of them. 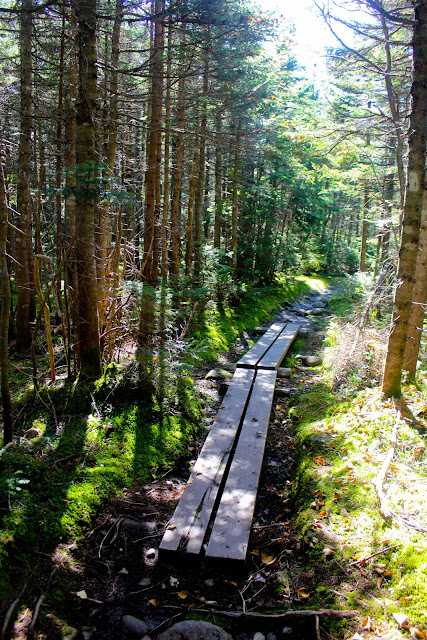 I have to admit I didn’t love hiking here. Lots of whining. It was just very difficult, kind of like rock hopping up a steep stream the whole time, and hard on the legs. (These planks helped a lot, but were only in a few areas.) But if you want the chance to get up to an alpine environment, and aren’t up for sleeping on the ground and carrying a 50 pound backpack, this is a rare opportunity. As you can imagine, it’s very popular with families and the Boomer crowd.
If you aren’t up for the hut experience, the White Mountains have loads of spectacular resorts and lodges. No matter how you get there–or when you go–it’s worth the effort.

3 thoughts on “Hut to Hut Hiking in the White Mountains”