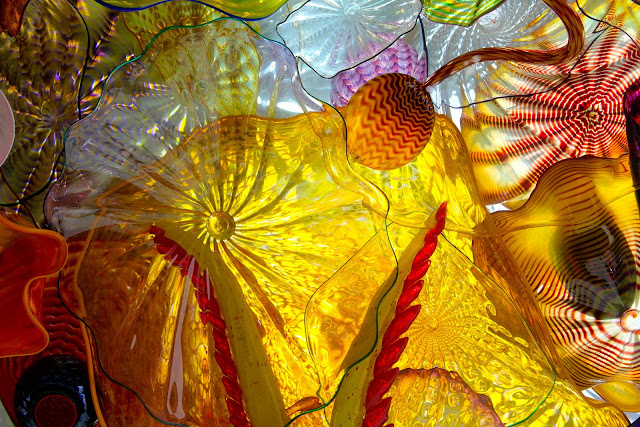 I dropped my son off at college a week ago at a wonderful liberal arts college in Tacoma, Washington, that I had never heard of before we started looking for schools in the Pacific Northwest. It’s called The University of Puget Sound. My dad and sister both live in Seattle, so my son had visited many times and was interested in going to school in the area. I only had an evening and a morning to explore while my son settled into his new digs, but I absolutely loved what I found. 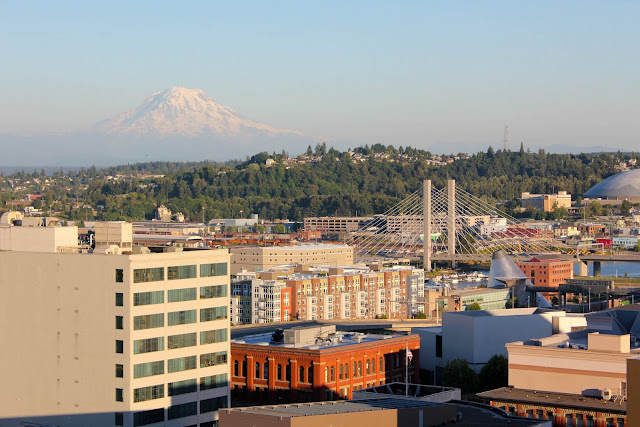 It didn’t hurt that the weather was glorious. And as the locals apparently say when Mount Ranier is visible, “The mountain is out.” There really are no words to describe its majestic, floating presence. I stayed at an interesting hotel, called Hotel Murano (it features the work of different glass artists throughout the hotel), in the downtown section, which has been refurbished in recent years, including converted industrial lofts and a cluster of museums. This is the view from the 15th floor. 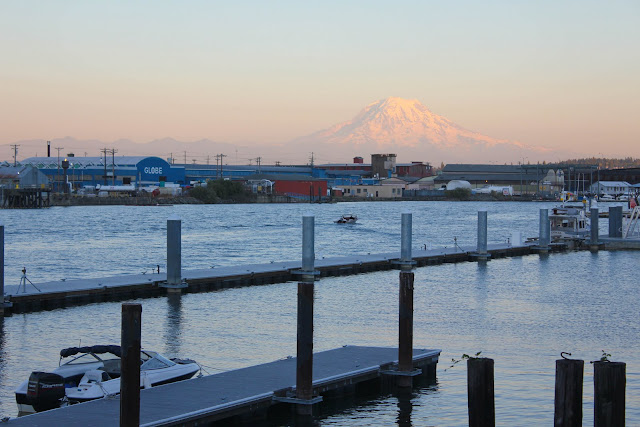 The first evening, I strolled along the waterfront, which is all part of Puget Sound. It was still very gritty, but had marinas, some restaurants and those cool lofts. 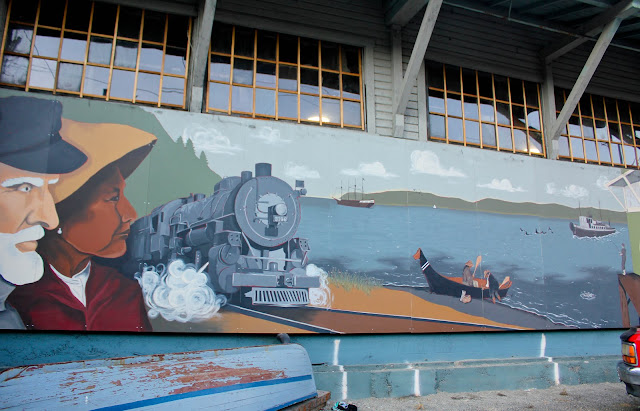 Tacoma has a reputation as a blue collar port city, especially compared to the hip city of Seattle about an hour to the north. But you could tell it’s coming into its own as a very desirable place to live and work, and go to college!! This was a mural on the wall of a maritime museum along that waterfront area. 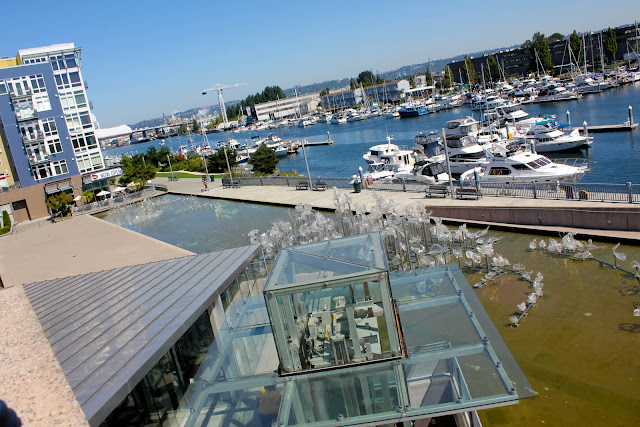 The next morning after I bid my son farewell (I was determined not to boo hoo, but failed.) I had some time before my flight home, so I returned to the downtown area and visited the Museum of Glass. You can see one of the newer loft developments on the left. The clear glass sculpture in the reflecting pool, called Fluent Steps, is in the back of the museum. I think it would look really cool at night. 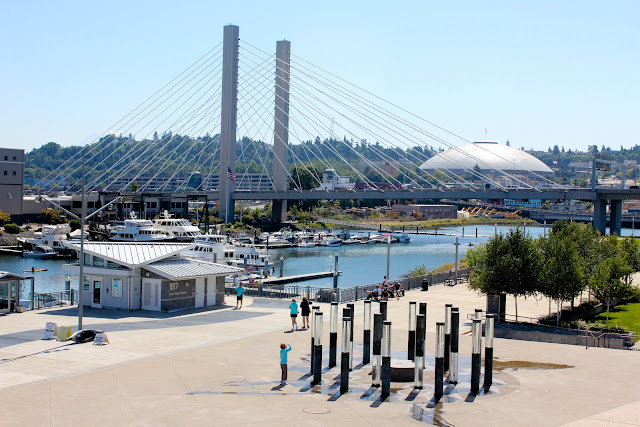 Here’s another outdoor glass sculpture, called Water Forest.
These cylinder shapes were filled with moving water. Again, would love to see these lit up at night. (Does anyone know the name of that beautiful bridge?) 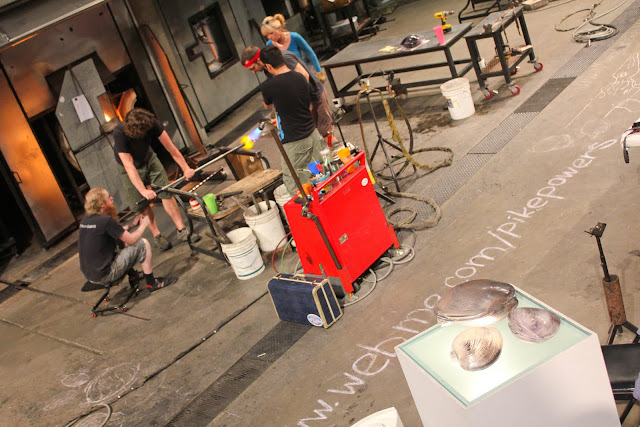 The museum didn’t allow photos inside, except for this impressive auditorium where they had glass blowing demonstrations. The featured “visiting artist” was the woman in blue from Florida and had studied under world-renowned glass artist Dale Chihuly (whose hometown is Tacoma). Some of her pieces are in the bottom right, which look like giant clam shells. Love those! 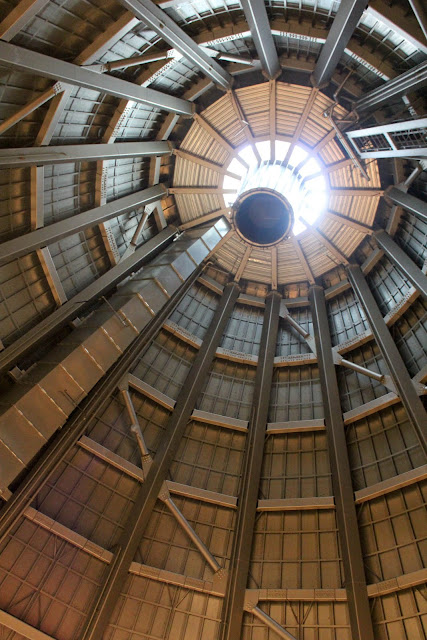 This is what you saw if you looked up. Apparently, you need a good-sized vent for all that heat.

That cone shape on the left is the same vent seen from the outside. The brick building has been converted into lofts. 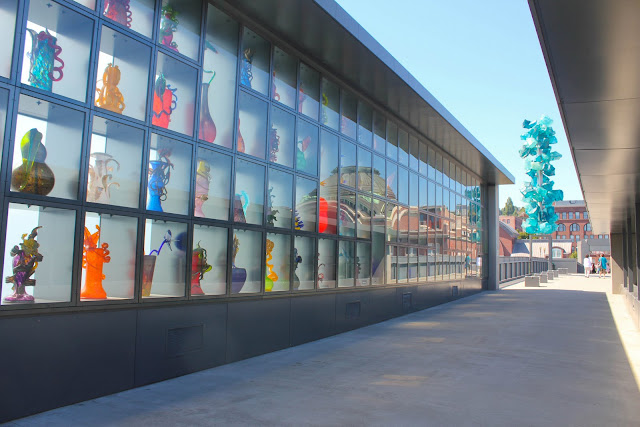 If you go to the top of the glass museum, there is a pedestrian bridge that crosses that highway–called the Chihuly Bridge of Glass–which was designed and filled with art by Chihuly.  The large display case is called The Venetian Wall. 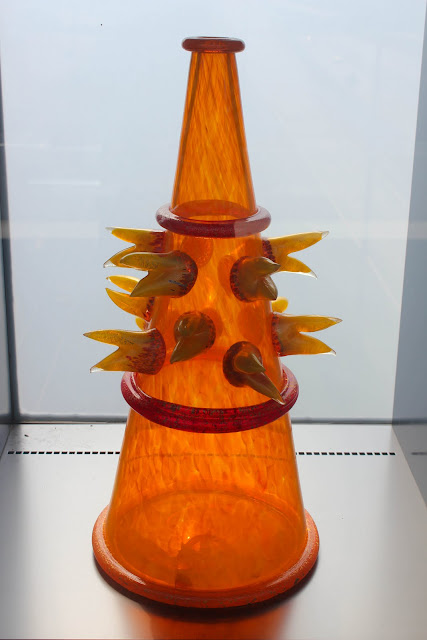 This is just one of the 109 sculptures from three different series by Chihuly. 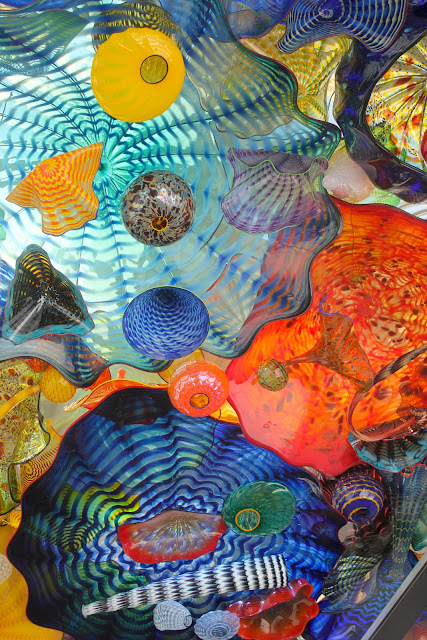 Part of the bridge is covered by what is called the Seaform Pavilion, and if you look up the ceiling is filled with these Chihuly pieces. Personally, I liked these more organic shapes over the other sculptures in the glass cases. 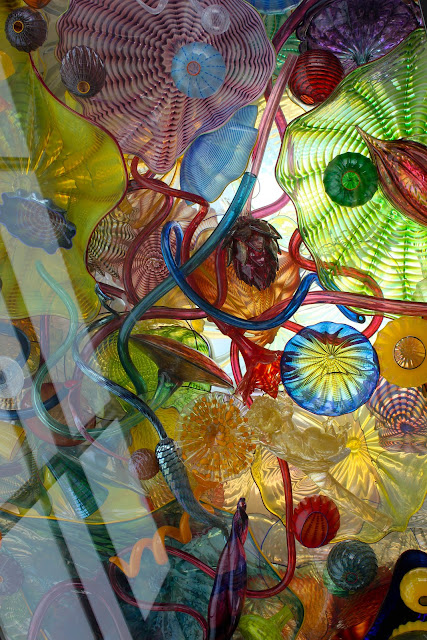 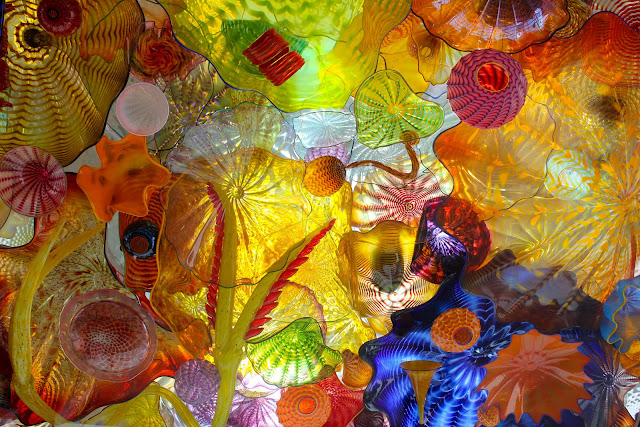 One thing you can count on Chihuly is volume and scale. The way the light filtered through the glass, however, really gave the sense of being underwater. 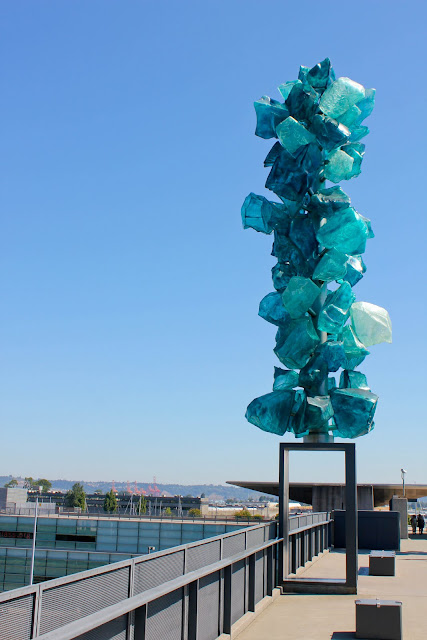 Two of these giant sculptures, called Crystal Tower, are also on the bridge and are supposed to represent the snow and ice forms in the mountains of Washington. 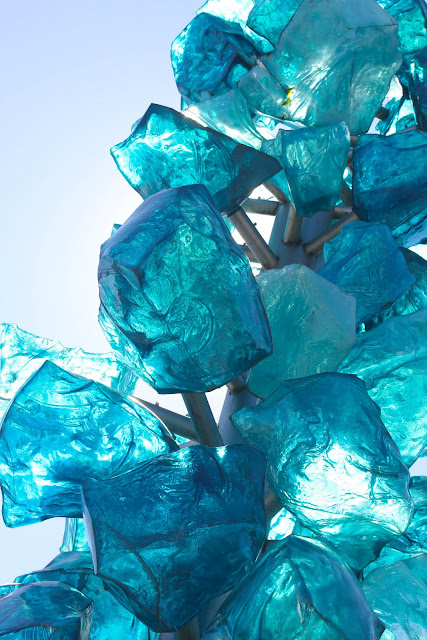 Definitely impressive chunks of glass, but I’m just not getting the “art.”Again, must look way better lighted at night. 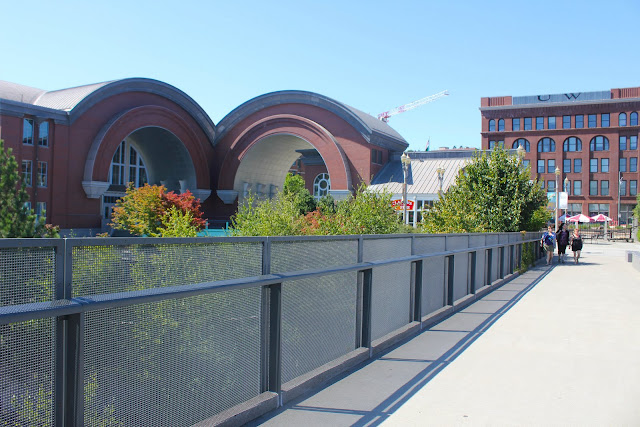 On the other side is a museum about the history of Washington. And a very good coffee joint. 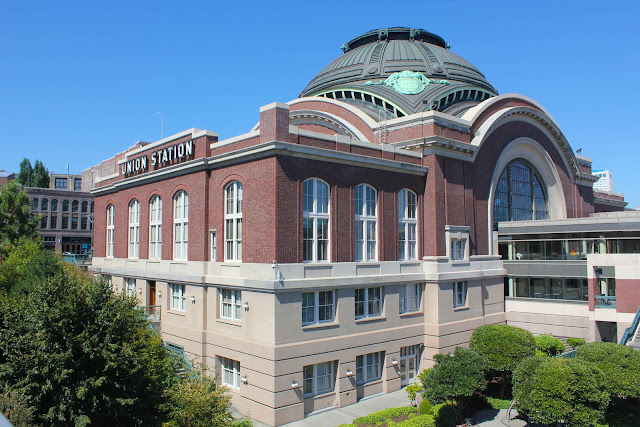 And this is the renovated train station. I’m looking forward to going inside these places on my next trip! 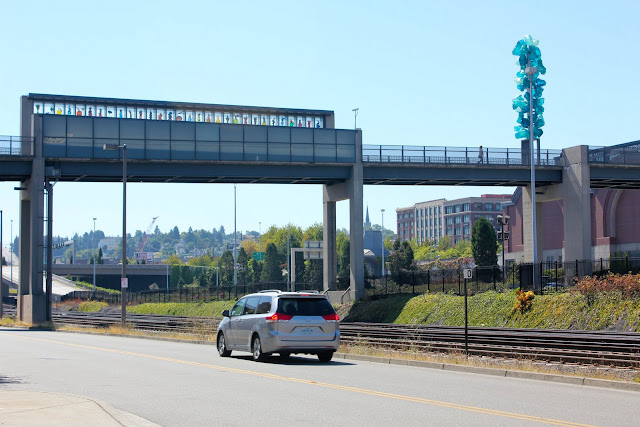 This is the bridge from below. 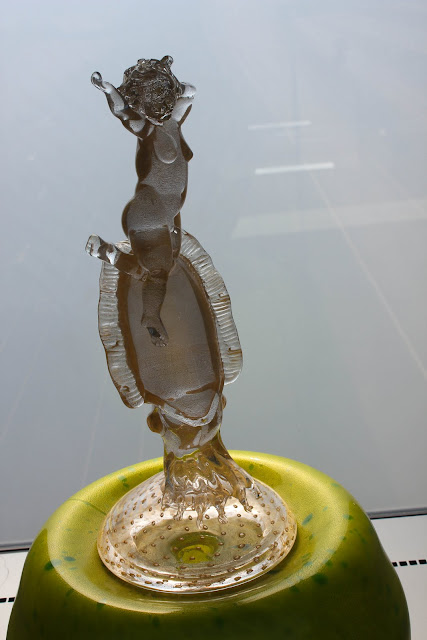 Another of Chihuly’s sculptures featured in the Venetian Wall. I don’t think Tacoma is a destination on its own quite yet–unless you are a glass fan or have a kid going to college there–but it’s definitely getting close. If you are in the Seattle area, and have had your fill of that city, this one has its own unique vibe and beauty. I did hear, however, that it rains a lot…