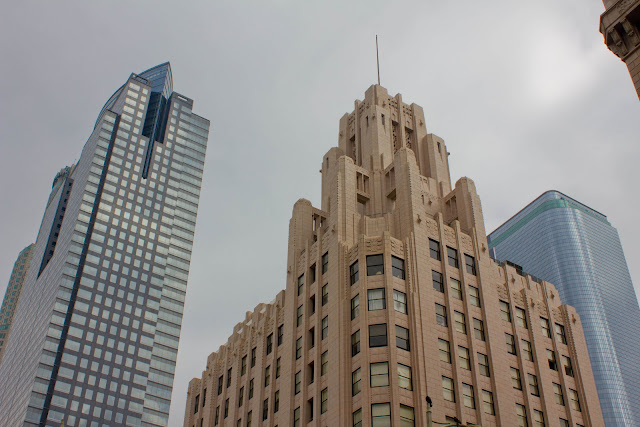 This Saturday, a group of us took a walking tour to learn about the buildings in downtown Los Angeles, especially the tall ones. This tour, sponsored by the L.A. Conservancy, was arranged ahead of time by our friend, Bill Hoffman, as part of a daylong outing to the big city from Laguna Beach. (See more of our adventure HERE.) As someone who lives “behind the Orange Curtain,” I don’t get up to L.A. as often as I would like, and usually it’s for a specific event, such as an art or theater show. 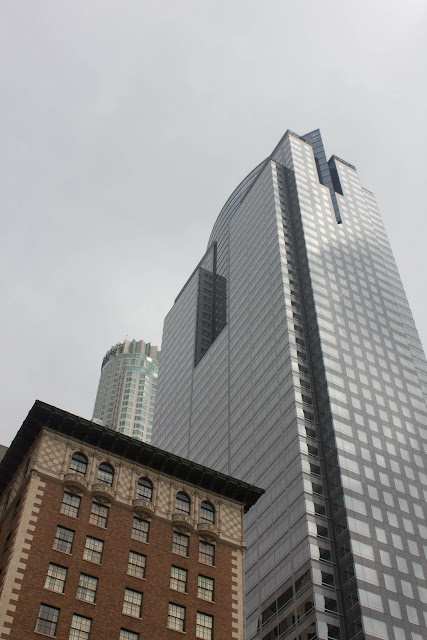 I know virtually nothing about downtown L.A., other than it’s home to MOCA, and Disney Hall, and lots of civic buildings are there, along with popular tourist areas like Union Station, China Town and Olvera Street. But it’s amazing what you can learn in a few hours with the help of an informative guide. We started off Pershing Square, and learned about one of L.A.’s most famous hotels, The Biltmore, (the brick building on the left). The tall one on the right is a famous skyscraper, called  the Gas Company Tower (note the “blue flame” shape on the top.) Peaking from behind is Library Tower. 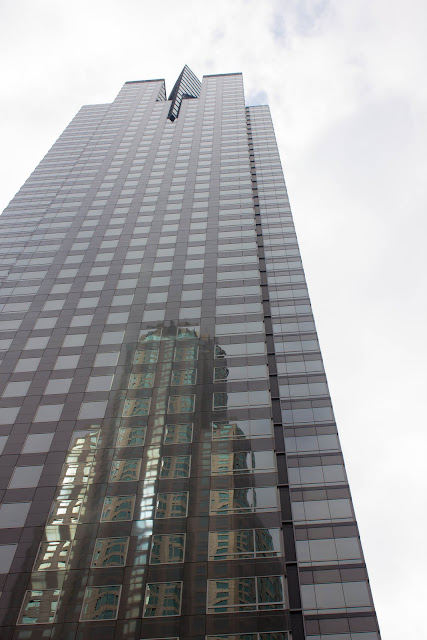 Here’s another shot of the Gas Company Tower with Library Tower (named that because it’s next to The Central Library) reflecting in the windows. These reflections change throughout the day, adding an interesting dynamic to the skyline. I can’t give you nearly the fascinating details that our guide shared with us, but I hope you get a taste to make you want to check out these buildings for yourself. 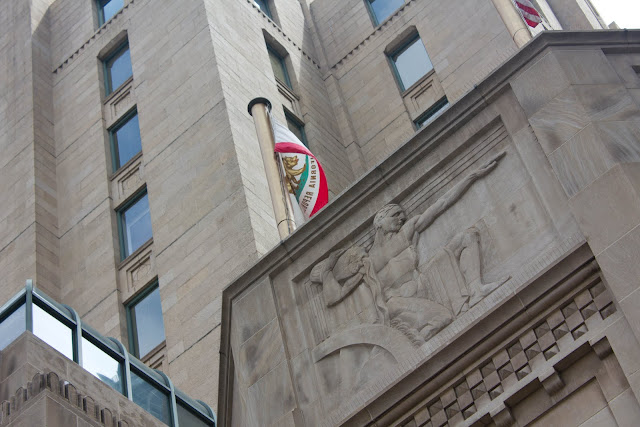 Darn. Now I can’t remember the name of this iconic building, and it was our guide’s favorite. (Can’t recall his name, either. Shucks!! He was great!!) It was a gas, oil or electric building. Anyway, totally amazing architecture. One fun fact that put the evolution of this business district in perspective for me was downtown L.A. had a height limit of 150-feet until it was repealed in 1957. That’s why the City of Angels doesn’t have as many skyscrapers as other comparable cities. 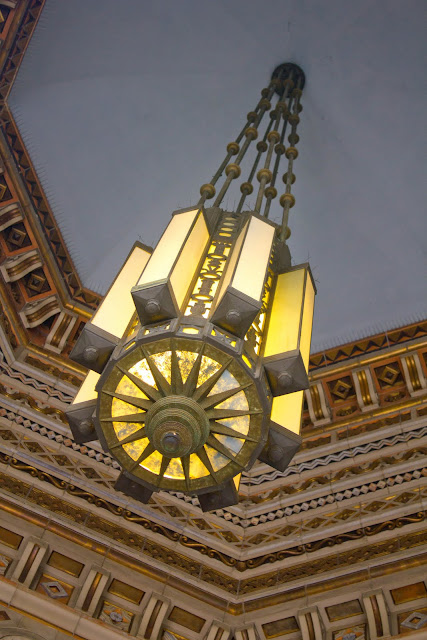 This is the exquisite entrance to mystery building.
(I will figure out the name of this building and get back to you soon!) 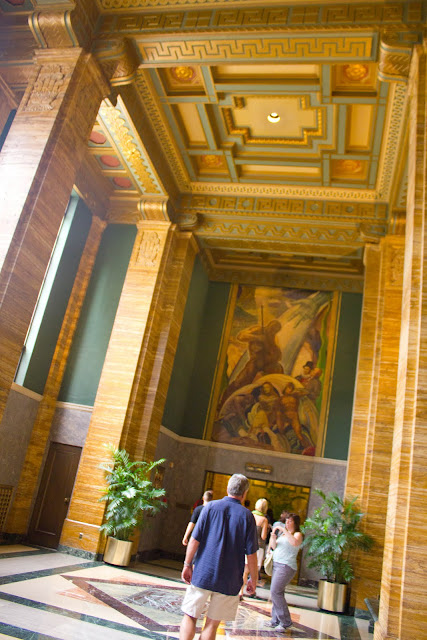 This is inside mystery building. Travertine, marble, inlays, murals, everything was stunning. Most of the other buildings we saw in this same block or so were related to the oil industry. They were not that tall (built before the height limit was changed), but modern for their day: The Superior Oil Building and the General Petroleum Building. 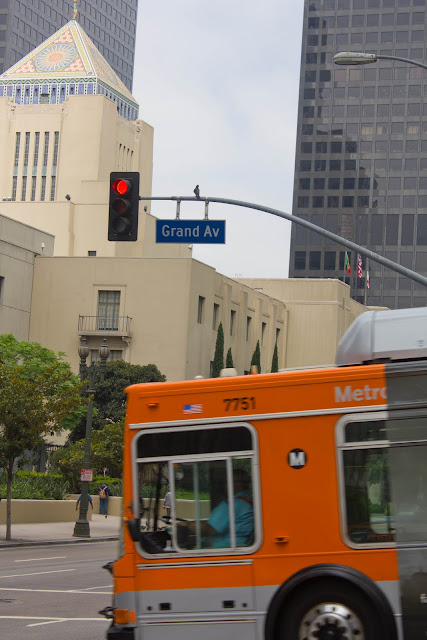 From there, we headed down 5th Street to the Los Angeles Central Library–that’s the one with the mosaic roof there. The library was supposed to be demolished in the mid-1970s, but concerned citizens banded together to form the L.A. Conservancy (the group giving this tour!) to save it. The city and developers struck an interesting deal that basically raised money for a massive library expansion by allowing developers to build two super tall buildings even though they exceeded the height limits: the Library Tower and the Gas Company Tower. (That’s just a peek inside how community redevelopment projects really work!) 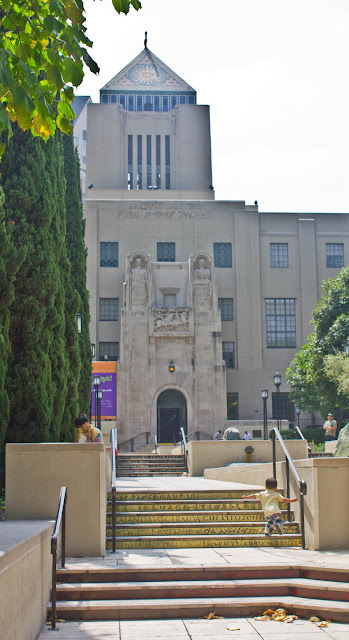 I had never seen this library before. It has restored gardens all around it, and lots of public art projects. 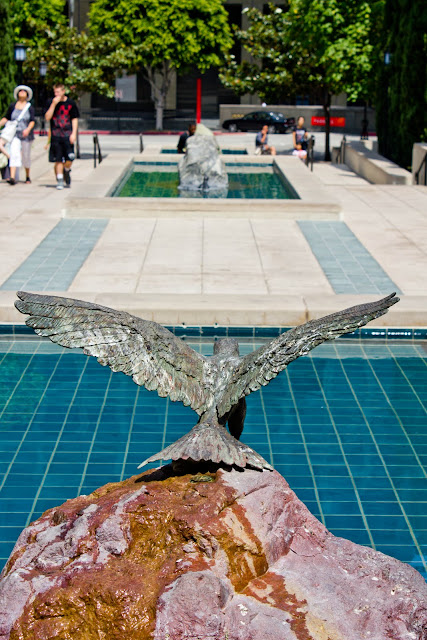 There are a series of small pools and sculptures that lead up to the front doors. 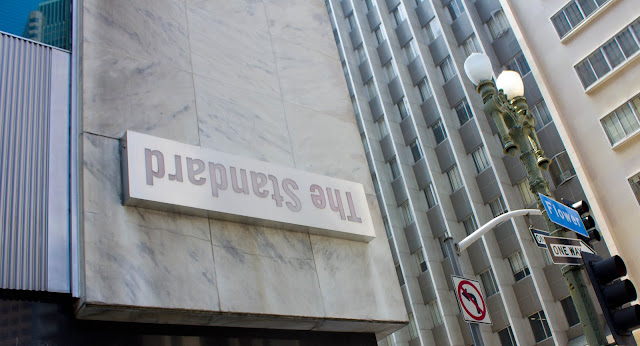 So those were all very interesting, but this was the place I had been wanted to check out: The Standard. It’s the former Superior Oil Building built in 1955 that was converted into a snazzy, new hotel in 2001. 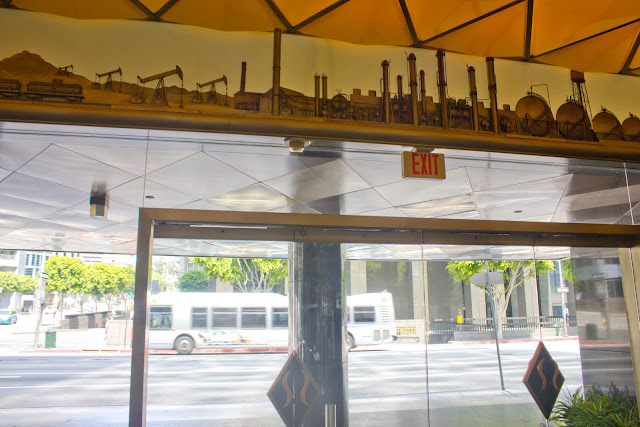 You might not appreciate the interesting 3-d mural of oil production along the front door if you weren’t aware of the building’s past. Another cool thing our guide helped us appreciate about “re-development” efforts in the city: even when they do take down old buildings, or change them radically, there have been efforts to keep pieces of the places to link the history to the past and present. 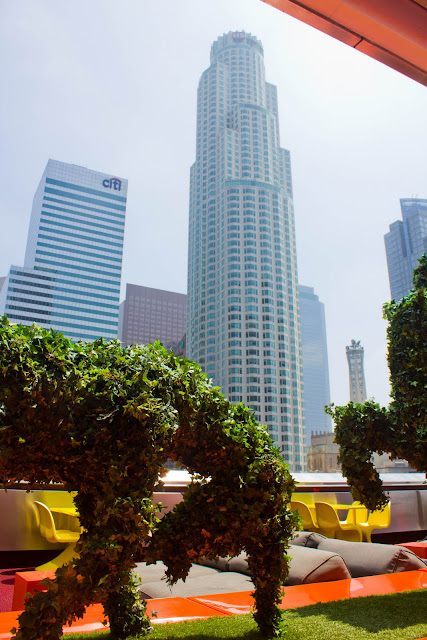 Back to the groovy Standard Hotel. This is the rooftop restaurant and bar. 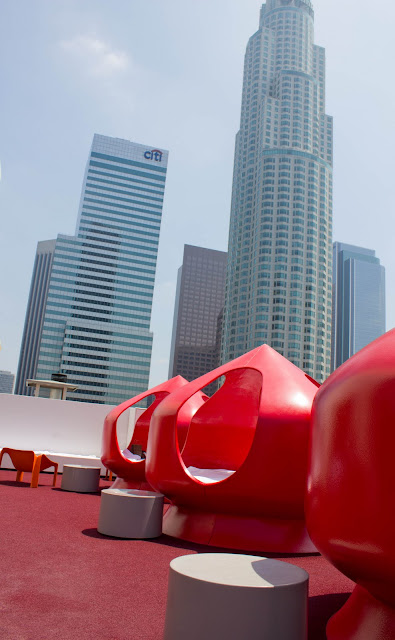 If the spectacular views don’t do it for you, plop down inside these Jetson-esque waterbeds… 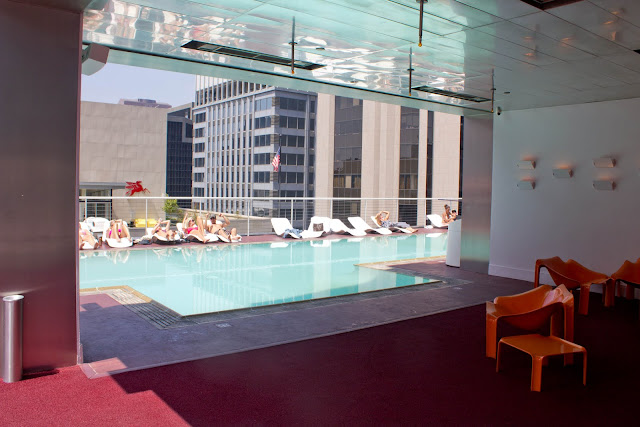 or splash around in this pool. 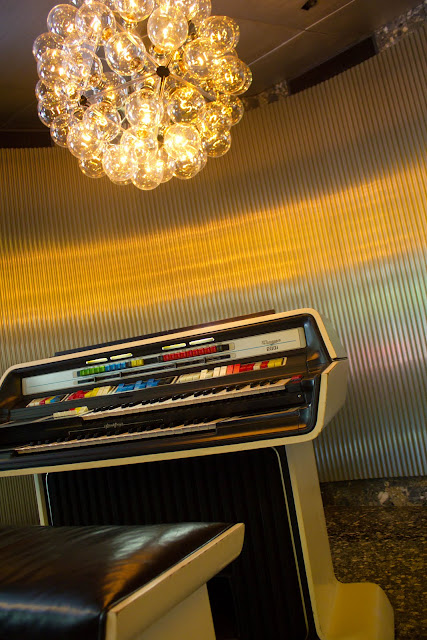 Or check out the mod organ in the lobby. 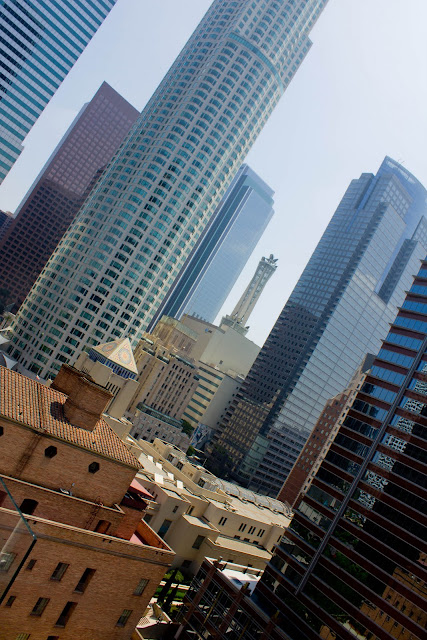 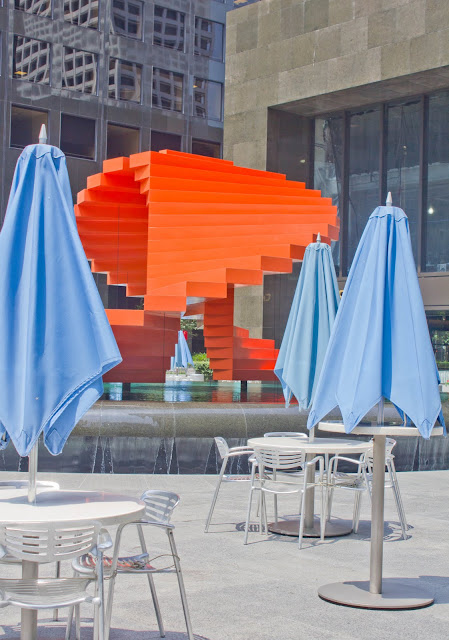 This is the plaza in between the two giant Arco Towers. (The sculpture by Herbert Bayer, titled “Double Ascension,” was one of the first art pieces commissioned by the city’s public art program.) The story with these towers was that in order to build them…

they knocked down this honey of a building, the Richfield Building (Atlantic Richfield Oil Company, aka ARCO), in 1968 to build the two larger towers, even though it was one of the most superb Art Deco structures ever built in L.A. There was a public outcry, but the L.A. Conservancy wasn’t founded for another decade. 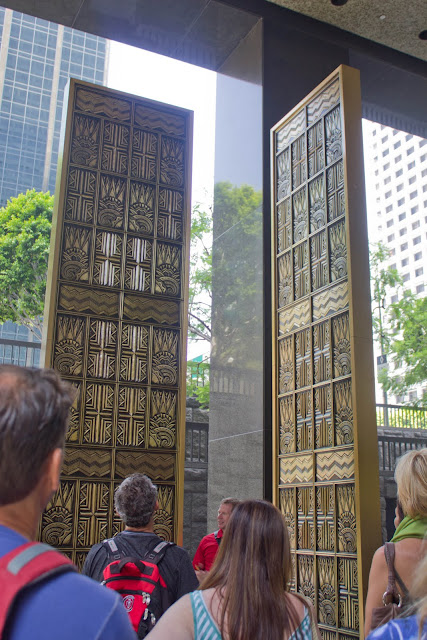 However, in the rear corner of the plaza stand two sets of elevators doors from the old Richfield Building (one of those “nods to the past” I mentioned earlier.) 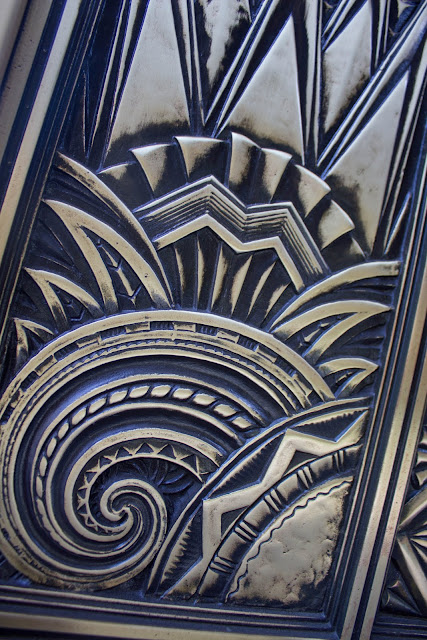 A close-up of the door. 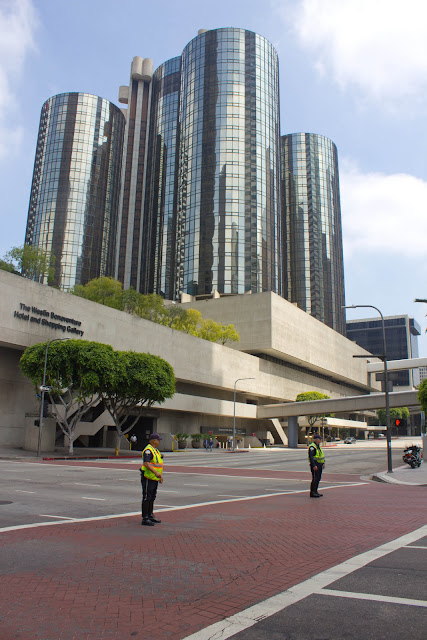 Now this place, the Bonaventure Hotel, blew me away. Built in the ’70s (can you tell?), the futuristic design resembles a rocket ship on a launch pad, and has pedestrian skywalks high above the city streets. 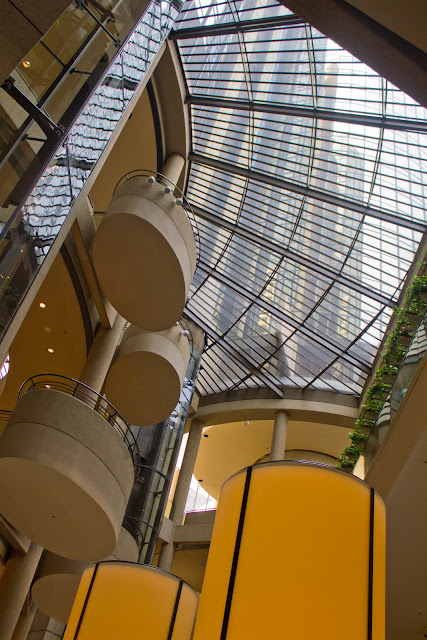 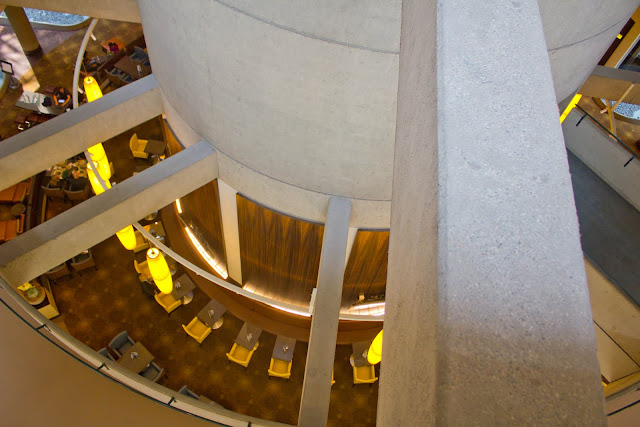 There’s a revolving cocktail lounge with 360-degree views in the central tower. 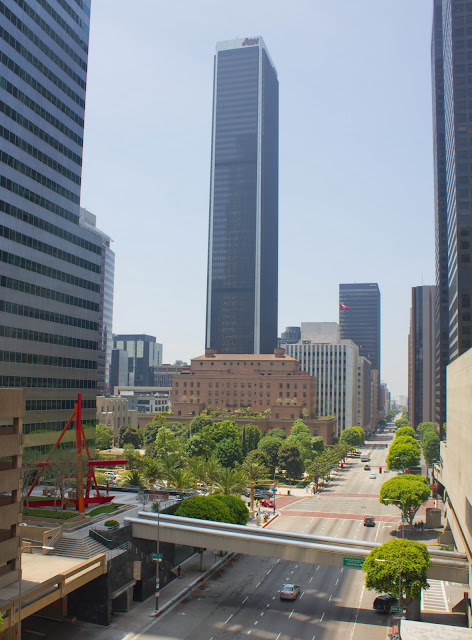 The skywalks connect interior hotel floors, as well as the hotel to surrounding buildings. The skywalk we were on here crossed over to Bunker Hill, which used to be a tony neighborhood of large Victorian houses. 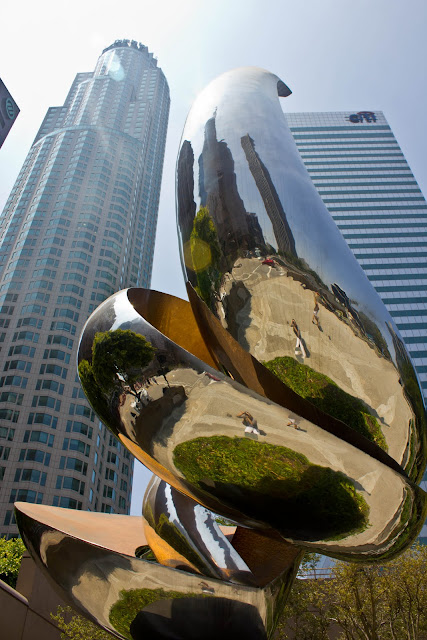 After the wealthy folks split for the beaches and ‘burbs, developers moved in in the ’60s–about the same time the height limit was repealed. All the old Victorians were demolished to make way for the city’s tallest skyscrapers. As we walked along the upper part of Bunker Hill, there was a small, but impressive outside sculpture park. 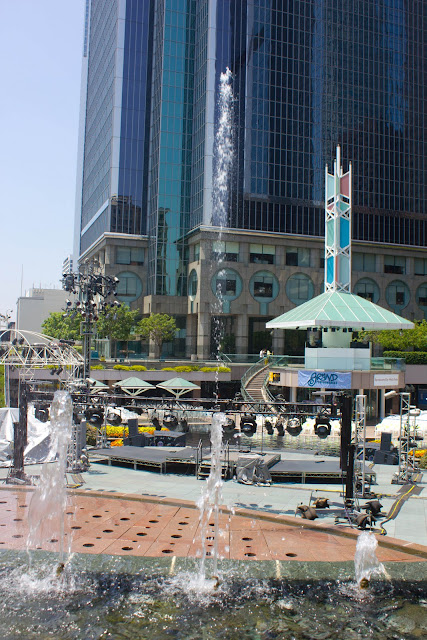 As we headed back to where we started, we passed this little water park,
which was set up with fountains, and outdoor stages and lights. Looked like a fun, summer evening venue! 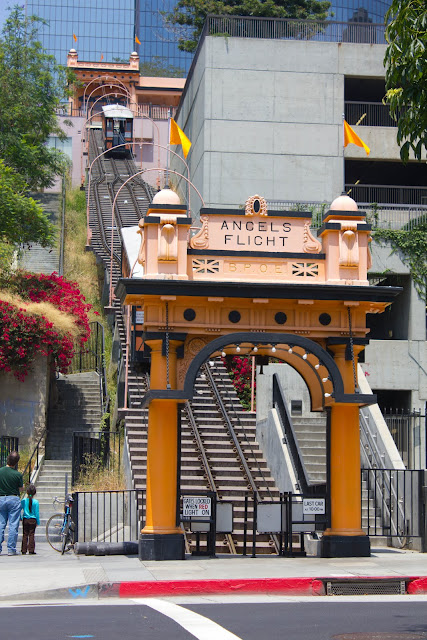 Maybe you’ve heard of this funicular ride–Angel’s Flight–but I hadn’t. We reached it at the top, and took it down. Apparently, this was built in 1901, and operated nearby, but was moved to this location at some point. 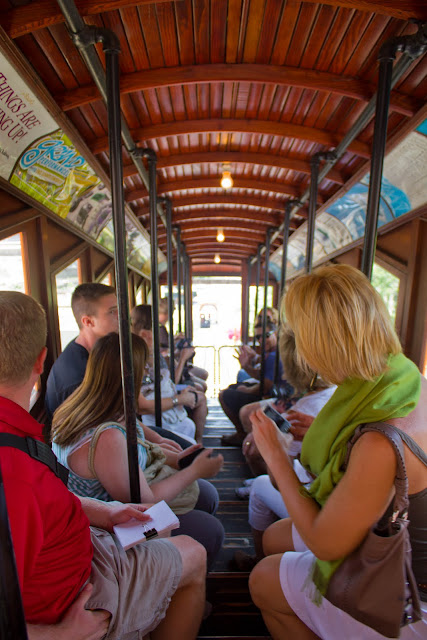 There was a tragic accident in 2001 and it was closed for several years.(A cable snapped; someone died. They didn’t tell us that until we were on our way down.) 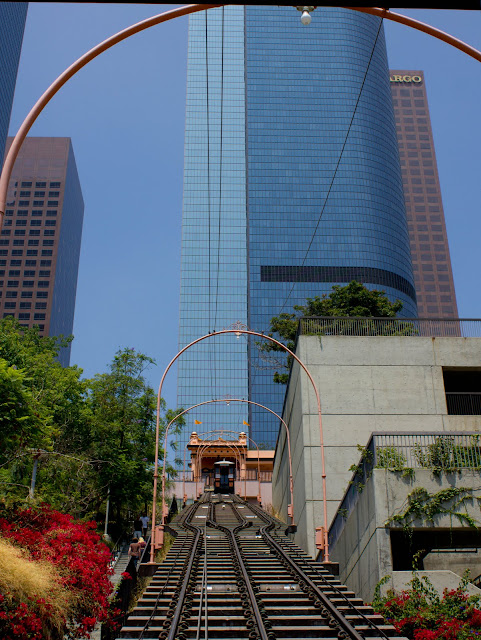 It reopened just last year, and was totally cool and fun. And historic. How ’bout that? 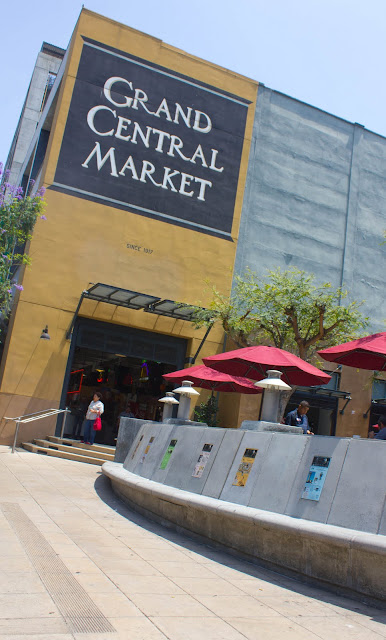 This little plaza is at the bottom of the ride. We didn’t have time to go inside that market. Another “next time.”
So that’s it. Again, there’s so much more to see and learn that I could share here.
I couldn’t recommend this walking tour by the L.A. Conservancy enough!!
They have a slate of other interesting walking tours, too, click HERE.
What an amazing cause!