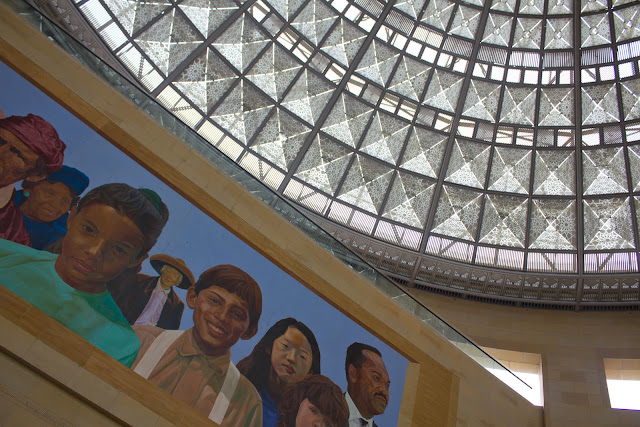 My friend, Bill Hoffman, a veteran high school teacher who has a background in urban planning, has taken his students, fellow teachers and friends on casual tours of parts of California for many years. On Saturday, he brought a group of us mainly from Laguna Beach to downtown L.A. to show us the sights, and we walked or used public transit the entire time. Yes, even in car-obsessed L.A. this is now possible!! 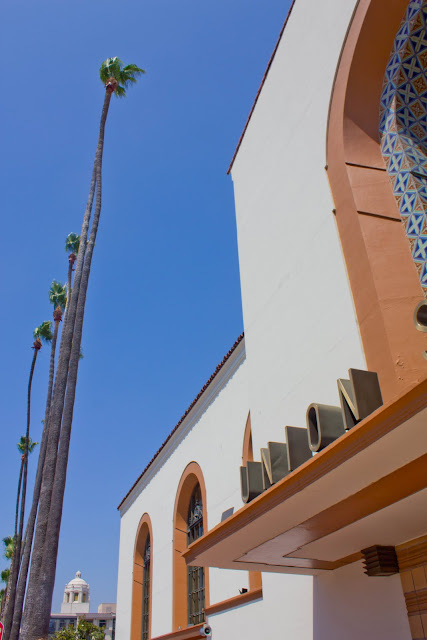 We hopped on the Amtrak at the Irvine Station, and climbed off about an hour later at Union Station in Los Angeles. Bill had signed us up for the Downtown’s Modern Skyline tour of architecture and development in the Central Business District of Los Angeles, which you can see by clicking HERE. The tour is sponsored by the Los Angeles Conservancy. 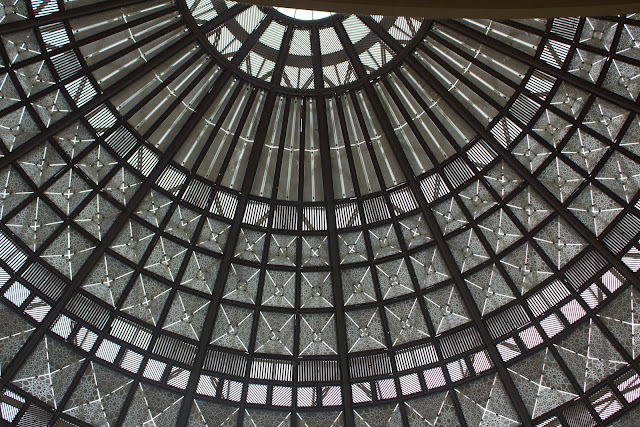 Union Station was not on the skyline tour, but is an architectural icon in itself. This is looking up into the main atrium dome. The L.A. Conservancy does offer a walking tour of the station. Click HERE for more info. 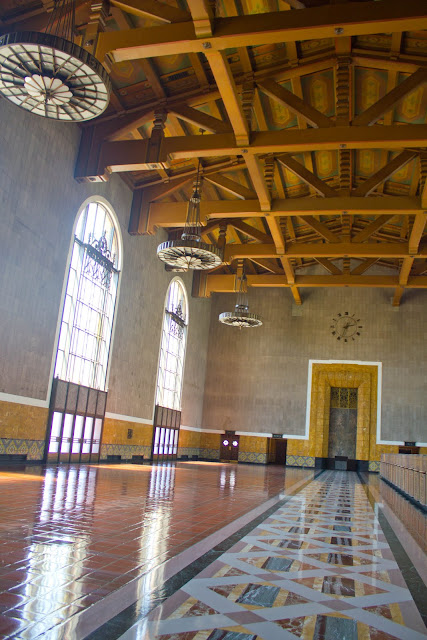 This area, the old ticketing room, was cordoned off, I’m assuming for renovation. Much of the flooring is inlaid travertine marble. 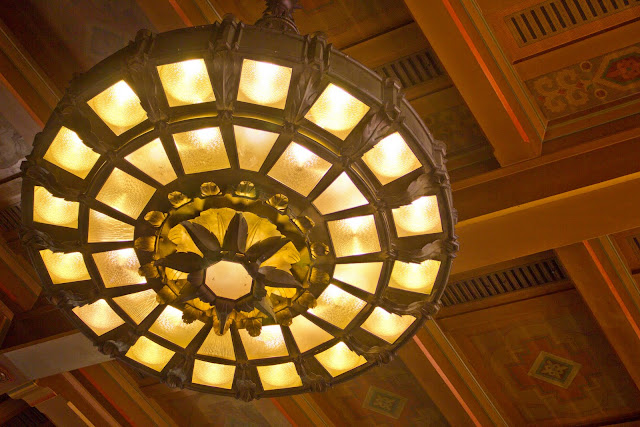 Someday, I would like to take a tour of just this place! Can you see all the intricate painting on the ceiling? And what’s the story with those giant fixtures and lights? 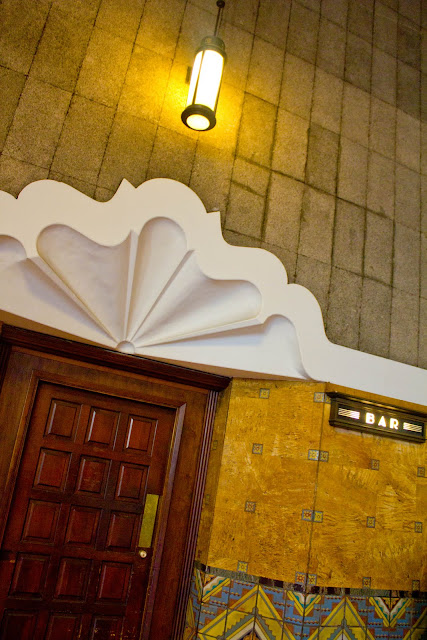 We all wandered around when we arrived, and before our departure home. The style is a combination of Danish Colonial Revival, Mission Revival, and Streamline Moderne. The architects were The Parkinsons, who also designed L.A. City Hall. 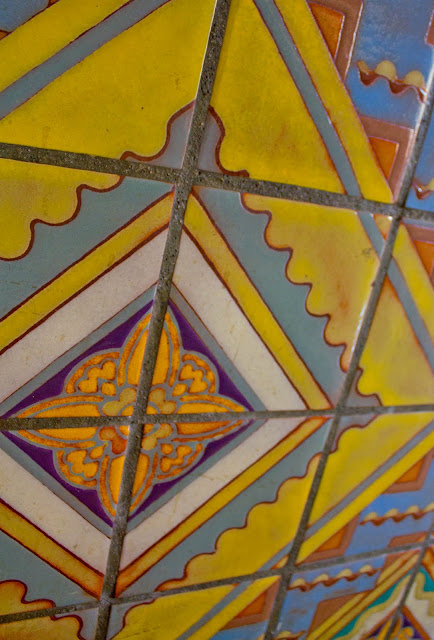 Seeing the details of this place could have made the trip worthwhile by itself. 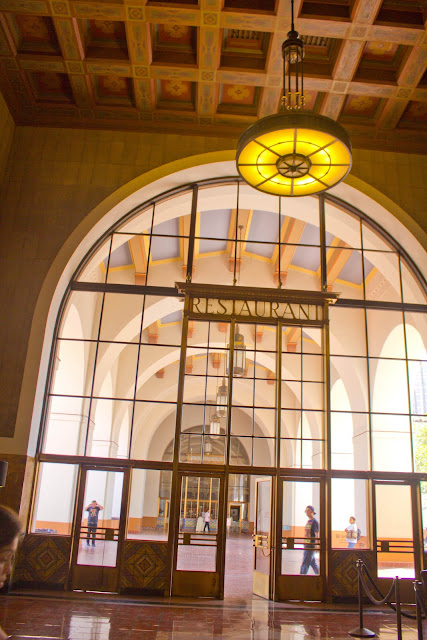 We bravely embarked upon this tour on Carmageddon, and thanks to the L.A. style hype, very few people were out and about. We could take a tour just learning about California tile!! These are mainly acoustical, glazed terra cotta. 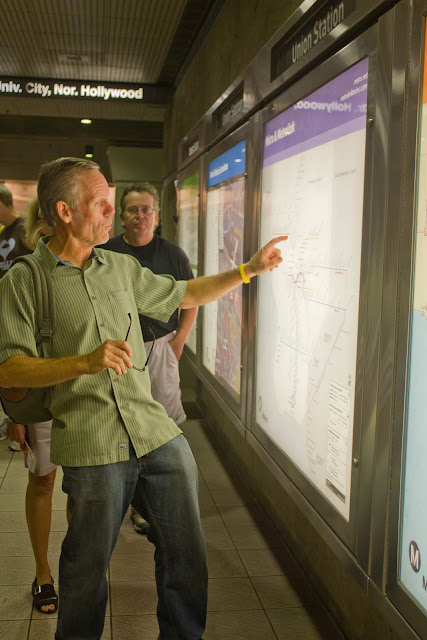 From Union Station, we walked down into the subway system. I’m afraid when I’m on a tour, I stop paying attention to where I am and just follow like a good sheep. So I’m not sure where we were at all times, despite Bill’s thorough explanations. 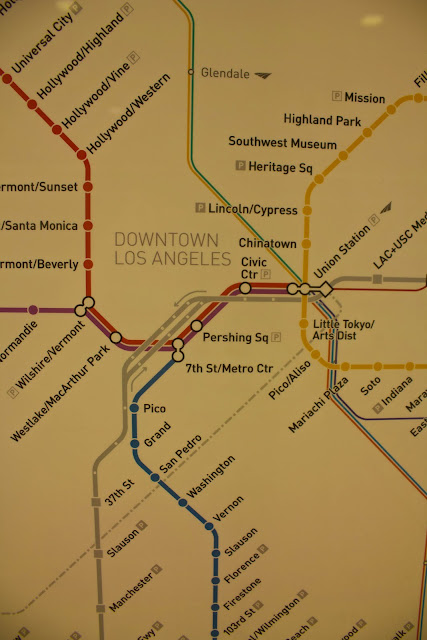 From what I could tell, you could actually walk to most of the places we visited. Union Station is within blocks of China Town, Civic Center and Olvera Steets. 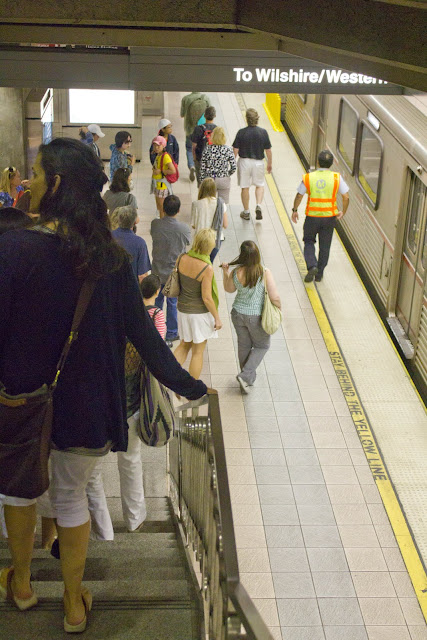 But teacher Bill was determined to turn us onto the new and improved Red Line. It’s great practice for future, car-free visits to the city!
As a passionate teacher for decades, Bill can’t help his desire to constantly teach. On our train ride up and back, we had color handouts, music, quizzes, and prizes, and even a test at the end. Do you know the state fossil? No, not Nancy Reagan. Do you know the state plant? No, not cannabis. Do you know the state fish? No, not sushi. Do you know the state reptile? No, not Arnold. How about the state motto? You can never look too good. Nope. What was the “Lowest Point” in the state. No, not Prop. 8. But sure could be! (Answers: sabre-tooth cat; California poppy; Golden Trout; Desert Tortoise; Eureka!; Badwater in Death Valley.) Yes, we may be a bunch of nerds, but funny ones, right? 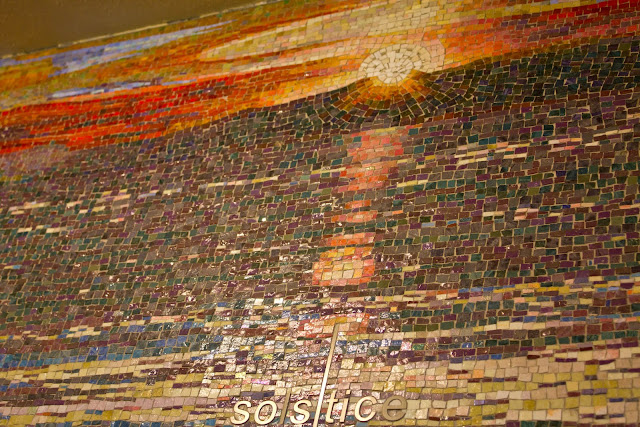 Even the subway halls were filled with public art, like this mosaic, which stretched about 50 feet along a wall. Anyway, we finally popped above ground around Pershing Square, and met our L. A. Conservancy guides for the Downtown Evolving Skyline tour, where we walked around a five block area and saw some of the most famous hotels (The Biltmore and the Bonaventure), corporate buildings (Gas Co. Tower, Arco Towers, Library Tower, etc.) and public facilities (The Central Library) in the downtown area. 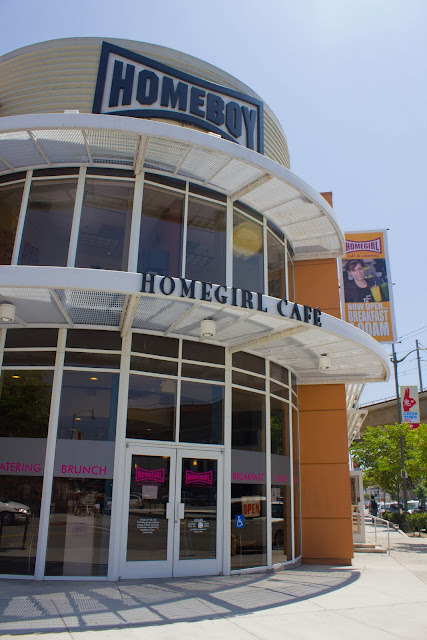 So after all that walking, we were pretty ravenous by lunchtime. Bill brought us to the HomeGirl Cafe, which is also just a block or so from Union Station. The place was started by a Jesuit priest named Father Greg Boyle, who worked with at-risk youth for the last 25 years. He started Homeboy Industries to help create jobs for kids involved in gangs. The mission statement: “Nothing stops a bullet like a job.” 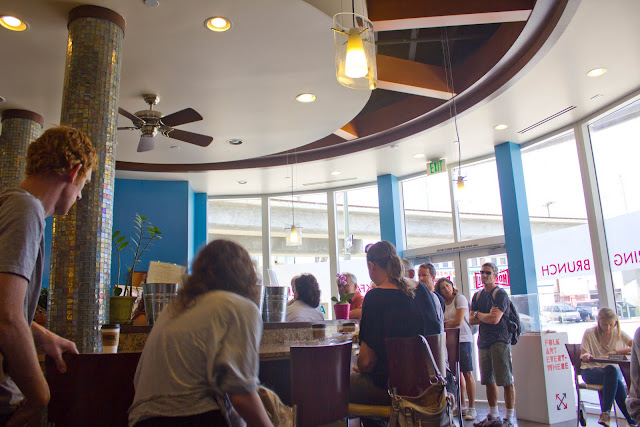 Homeboy Industries is housed in this location near China Town, and this wonderful HomeGirl cafe, which serves contemporary Latina dishes, is on the first-floor storefront. The food and service were excellent (yummy pico de gallo, nopales and mango agua frescas!). We can’t wait to return. They also have their own bakery, catering services and merchandise. I had heard a lot about this place, and am so happy to have finally experienced in person. If the world had more people like Father Boyle… 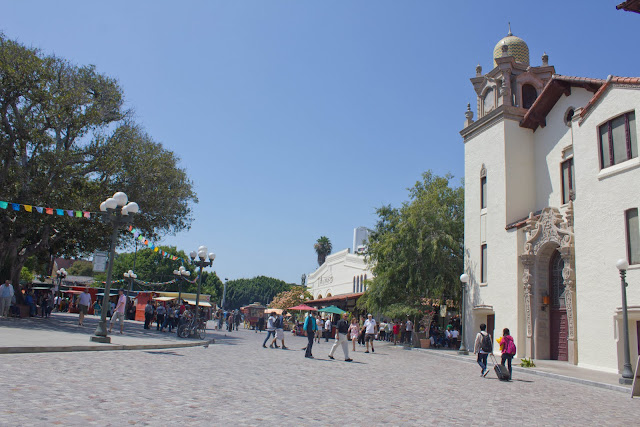 After lunch, we had about an hour to spend before our train left. So we wandered over to El Pueblo de Los Angeles, the historic heart of L.A., and popped into one of the restaurants off Olvera Street for margaritas. (Hey, we weren’t driving, remember!) We also went in search of this famous rooftop mural by Mexican muralist David Siquieros, called “American Tropical,” which he painted up on the side of the old Italian Hall building in 1932. It shows an eagle bearing down upon a tied-up “native,” apparently symbolizing Western imperialism. The controversial mural was whitewashed soon after it was completed, and Siqueiros was soon deported. But now it’s being restored so the public can view it. But it’s not complete yet and all we saw was the protective  covering. Next trip!! Read about the renovation project HERE. 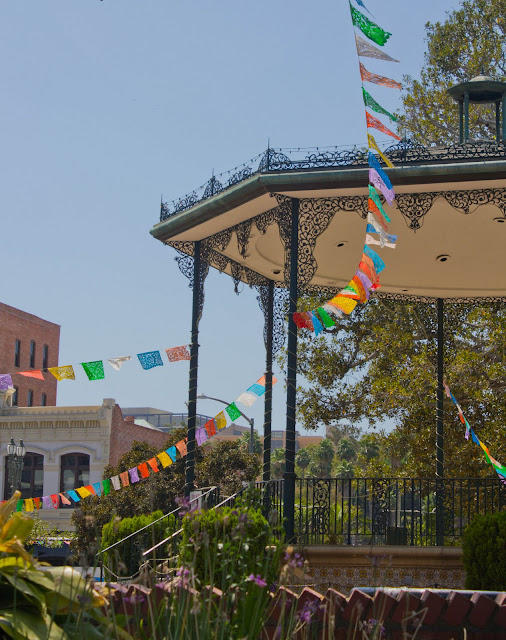 There’s usually festive music and street musicians playing on weekends. The actual Olvera Street is around the corner, which is packed with vendors of trinkets and mostly Mexican souvenirs. 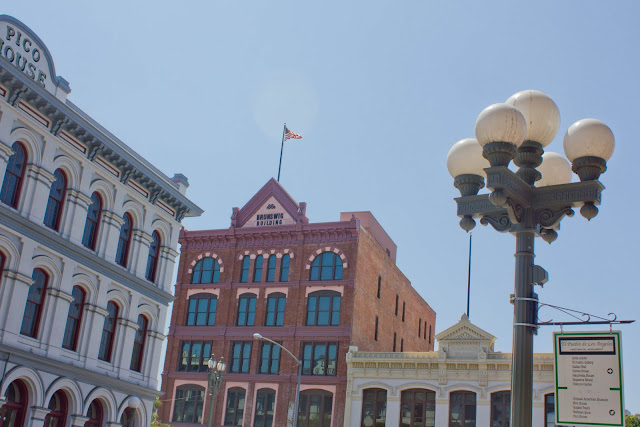 Just to the north were these restored, historic buildings, where the original China Town was located. 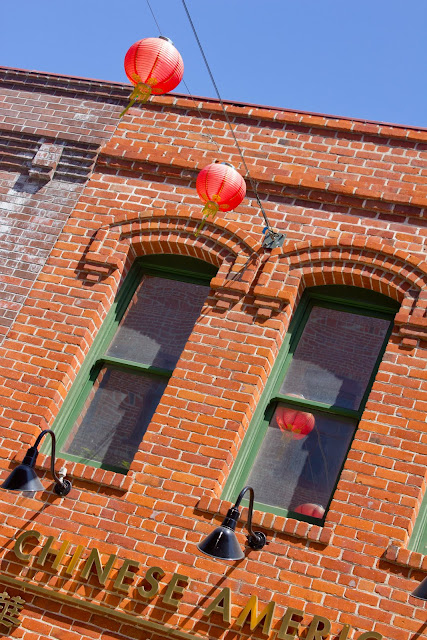 This is the home of the Chinese American Museum, which we didn’t have time to visit. Next trip! We did find out one of the questions on Bill’s quiz here, however. (Thanks, Ondean!!) In case you were wondering, California became a state in 1850. 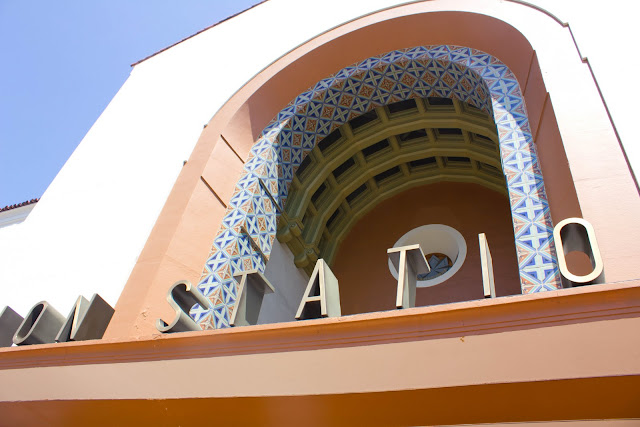 So if you have a chance, take a day and hop on the train–and metro!–for your own Los Angeles adventure!
Click HERE if you want to see our Downtown Skyline tour, sponsored by the L.A. Conservancy. Click HERE to see all the other cool walking tours they offer!
A big thanks to Bill Hoffman, the ultimate teacher!!