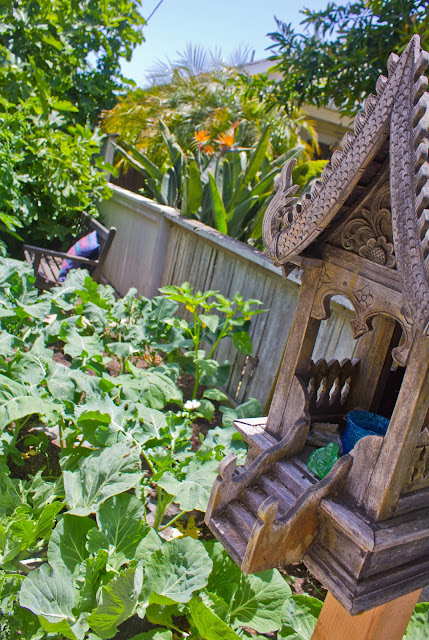 My husband and I went on the first annual Edible Garden Tour Saturday morning in our hometown of Laguna Beach. We really didn’t know what to expect, other than we would wander around a six-block area of town and visit gardens that featured organic vegetables and fruit. 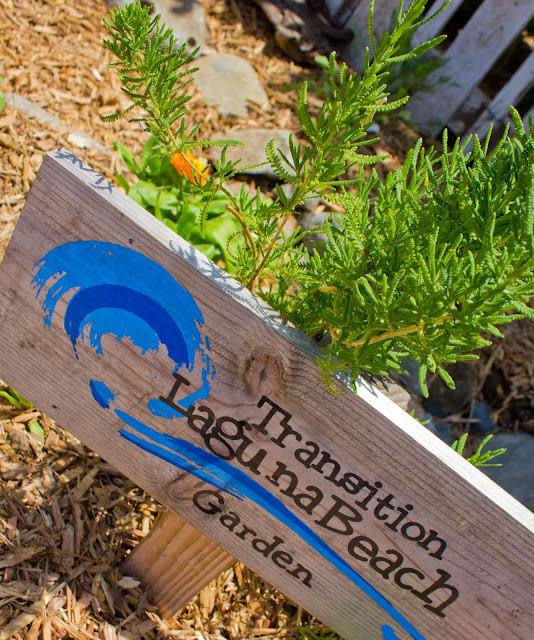 The tour was sponsored by a new group in town called Transition Laguna. Apparently, it’s a worldwide organization where communities can join together to find ways to kick our dependence on oil and try to stunt the damage of climate change trends. One way is to grow your own food–and this tour showcased the variety of ways residents were working edible gardens into their lives. 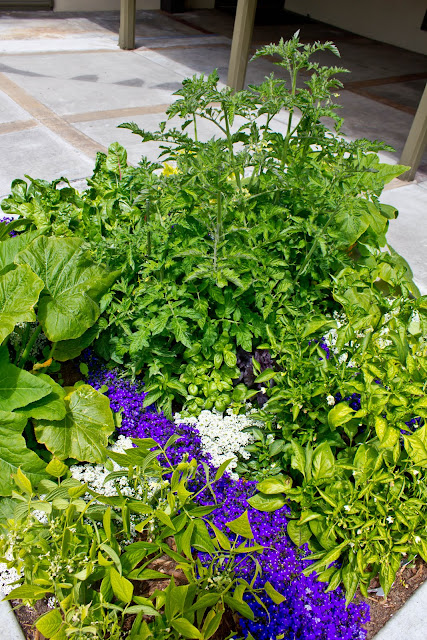 The first stop was the Neighborhood Congregational Church, where Transition members helped build several raised gardens in the church courtyard. Church members bring their organic veggies and fruit to our local homeless shelter every Monday. (If you’ve ever helped feed the homeless, you can imagine how much fresh produce is appreciated there.) 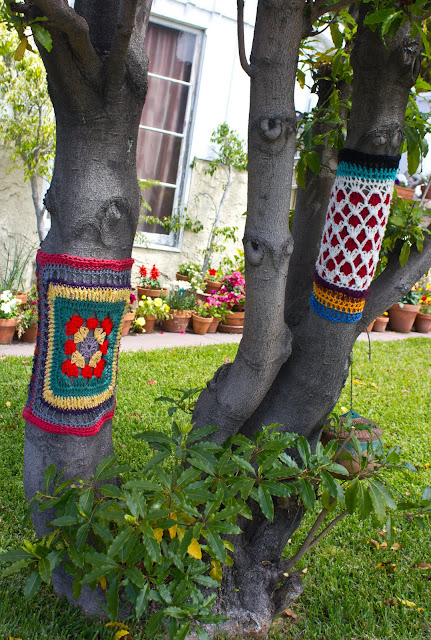 After the church stop, we walked by this tree–which I wanted to share with you to give you a feel of the bohemian vibe that still exists in the village–to our next stop up the street. Laguna Beach has a long history of progressive activism, however,Transition Laguna is striving to stay out of the local politics and forge connections instead of conflicts. 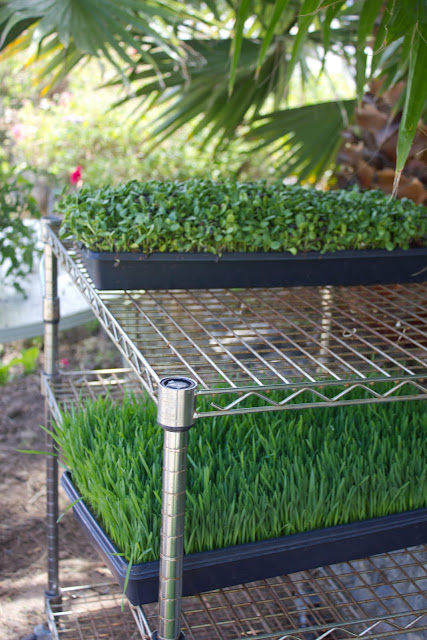 The next stop was a funky abode just up Thalia Street, where Transition volunteers were busy squeezing wheat grass juice in the kitchen. The homeowner, named Dr. Dave, who is an expert on composting and horticulture, shared how he raises wheat grass, sunflower sprouts and other micro greens.
. 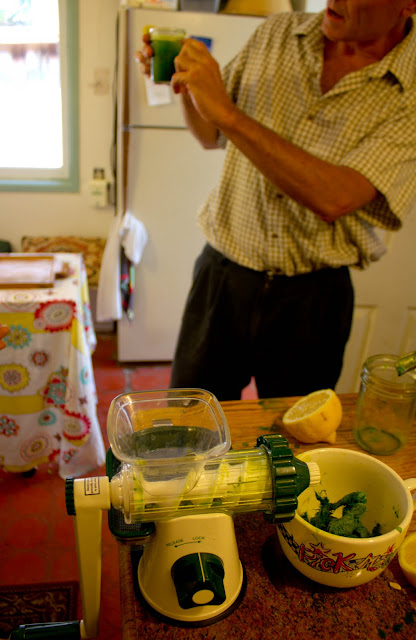 They mix the squeezed wheat grass with a little lemon, and toast to their health. 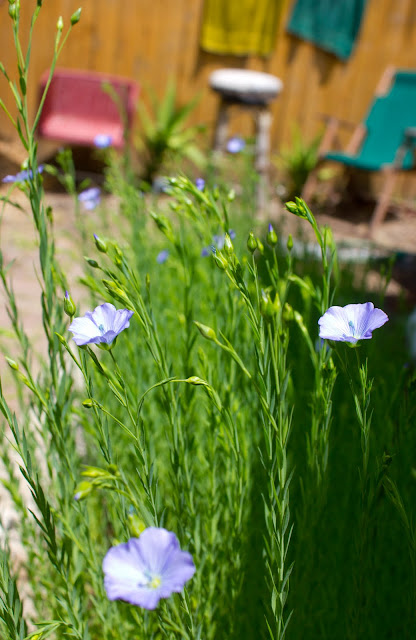 Dr. Dave had a bed of flowering flax seed. 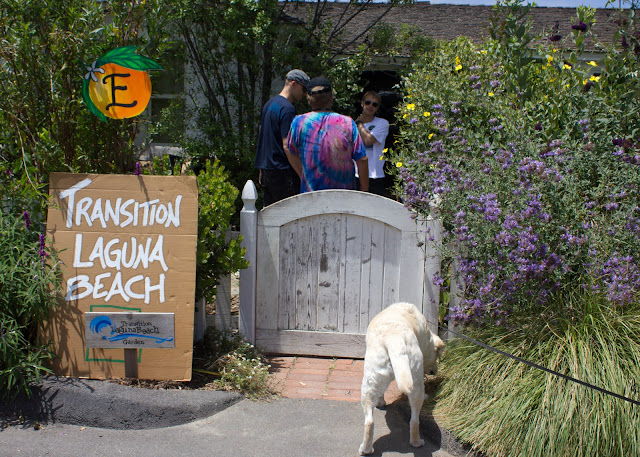 Here’s another stop just around the corner on Seaview Street, the home of Max Isles who is a founding member of Transition Laguna Beach.
(That’s our dog, Jenny, who can’t believe she was included in a tour that involved edibles!) 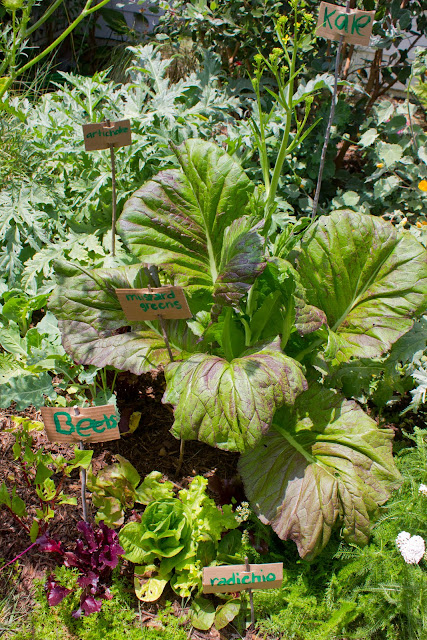 Max had veggies and fruit bushes in every possible corner of his charming cottage garden. 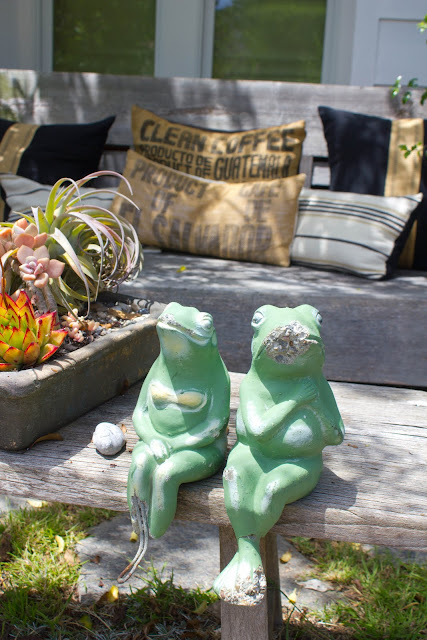 Max is certified with Build It Green and advises people
on how they can save energy and make their homes healthier. 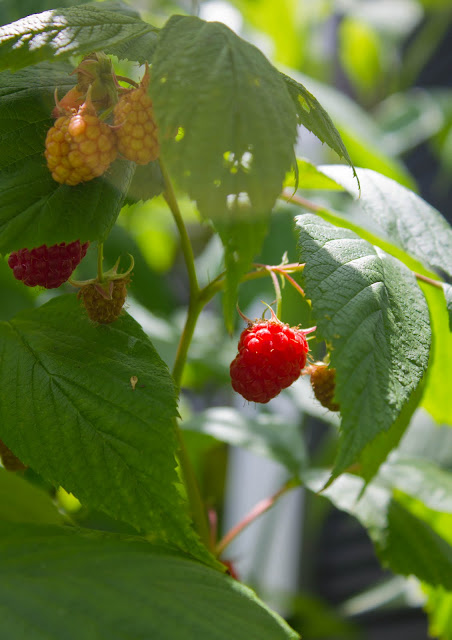 He also heads up the “Gardens for Life” program at The Ecology Center in neighboring city,
San Juan Capistrano. 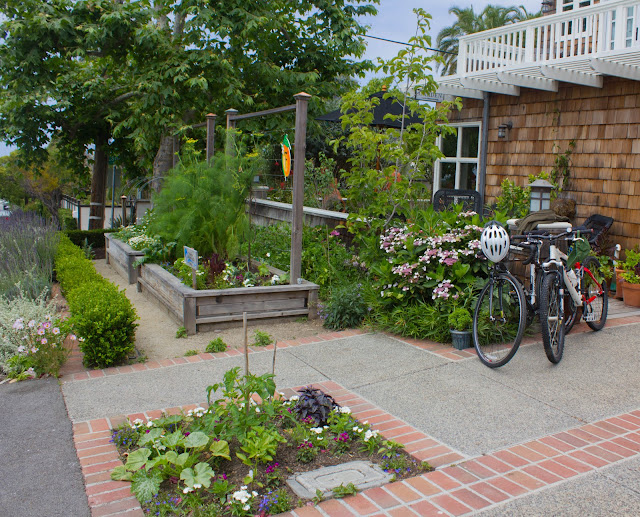 Here’s another stop at a corner home on Anita Street that was wrapped in flower and vegetable gardens. The owners were experimenting with dry farmed tomatoes. 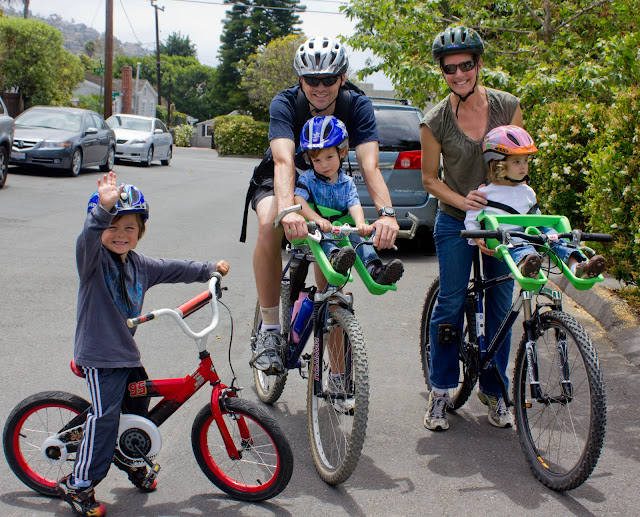 Transition Laguna teamed with a local eco-adventure tour company, called La Vida Laguna, which provided a fleet of about 20 bicycles that people could ride to the gardens for free. We kept crossing paths with this adorable family, who boldly embraced the idea of biking to visit the different gardens. 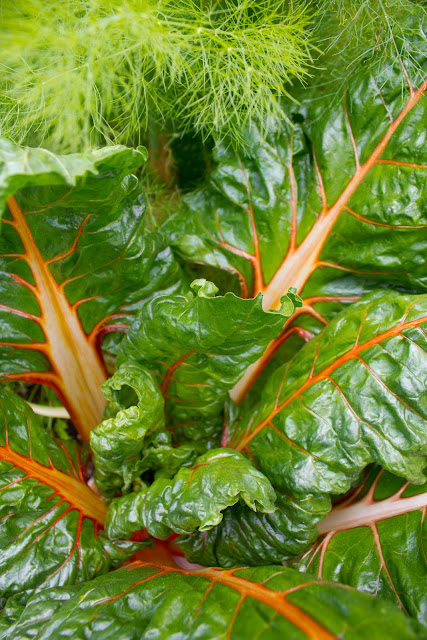 Almost all the gardens were bursting with different types of greens, from kale to collards, and most enhanced the beauty of the gardens as well. In the last couple years, Transition Laguna volunteers have helped residents create private edible gardens all over the city. 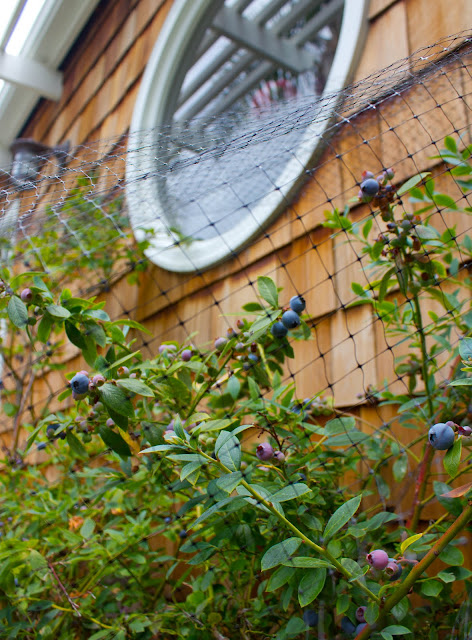 Blueberries protected from the birds under netting. 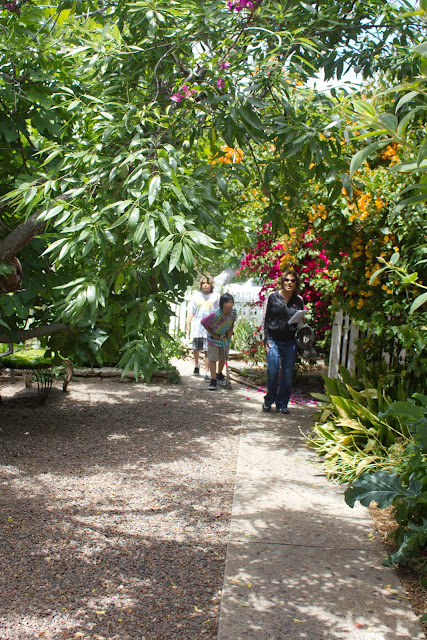 This was the last–and among the favorite–stops on the tour. The entrance was draped in bougainvillea, but if you looked closely there were vegetables plants everywhere. 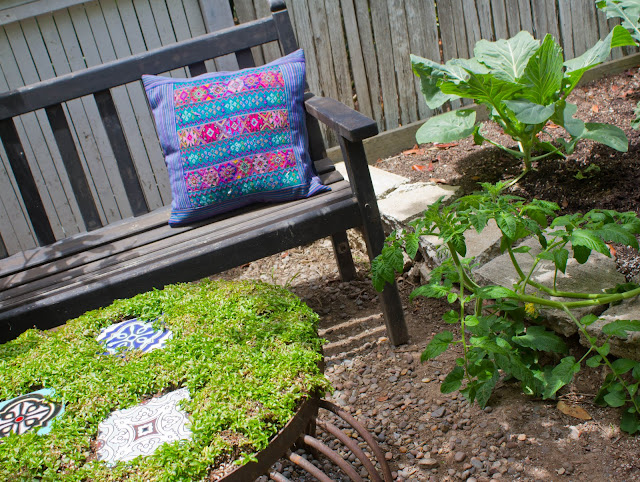 The vegetables were just part of the landscaping. 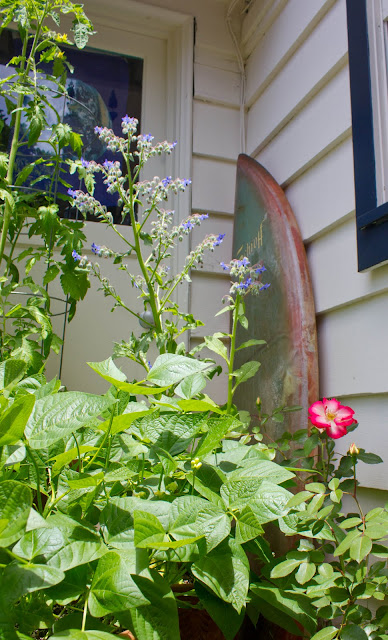 The owners were on the younger side of the Transition Laguna crowd, from what I could tell. One of the cool things about this group was their diversity and inclusive nature. 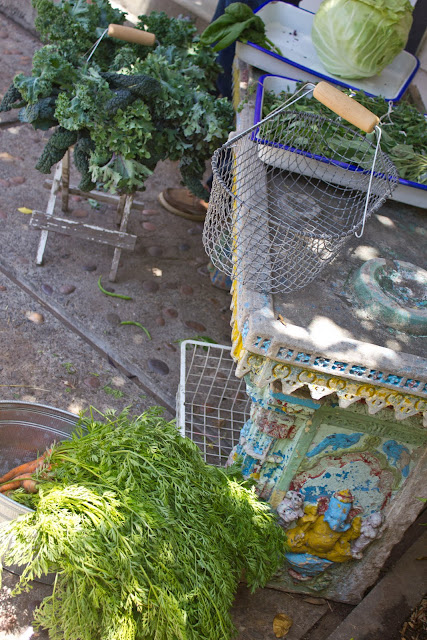 They also were selling organic veggies they grew on a nearby piece of land in Bluebird Canyon. 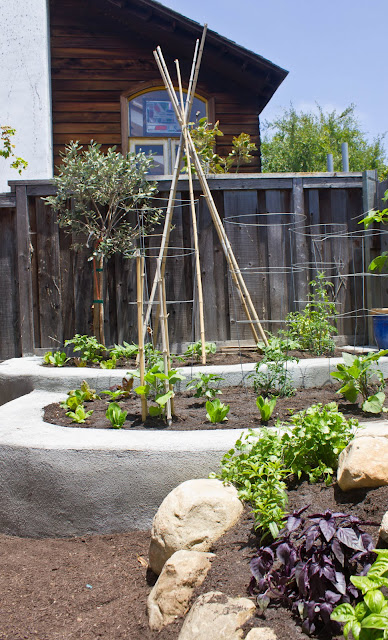 This is their backyard, where they built these raised beds using recycled materials. 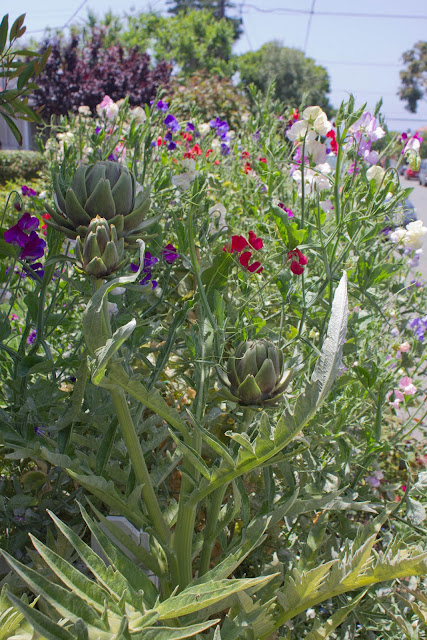 The sponsors of the tour said they had a strong turnout. What I thought was brilliant about this tour was that it not only exposed people to ways you can easily incorporate vegetables into almost any garden, but it also helped connect all the people participating in the tour–from the generous homeowners and gardeners to those  who just enjoyed exploring the neighborhood.

If you are interested in starting a Transition in your community, click here to learn how easy it is!