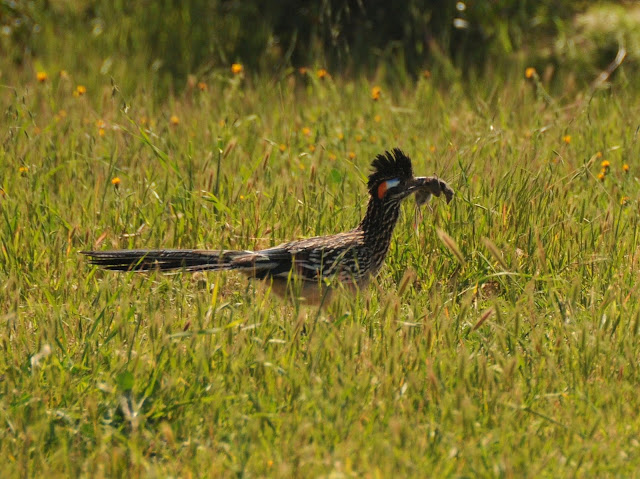 My friend Jill took these photos while we were hiking recently in the coastal hills of Crystal Cove State Park, just south of Laguna Beach. I arrived to the park just before she did, and had recognized the descending coos of the Greater Roadrunner. I was following it around a meadow (I think it thought I wanted its mouse.) when Jill arrived. She grabbed her camera and got this shot with only a 200 zoom, which captured that amazing bright orange and blue bare spot behind its eyes. 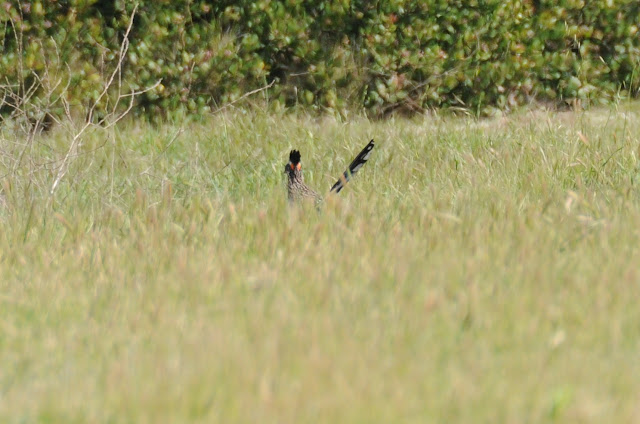 I can’t remember anymore what I thought about birdwatching before I caught the bug several years ago. My husband, who goes out with me mainly just to be in nature, always commented how “birders” were kooky. Remember Jane Hathaway? 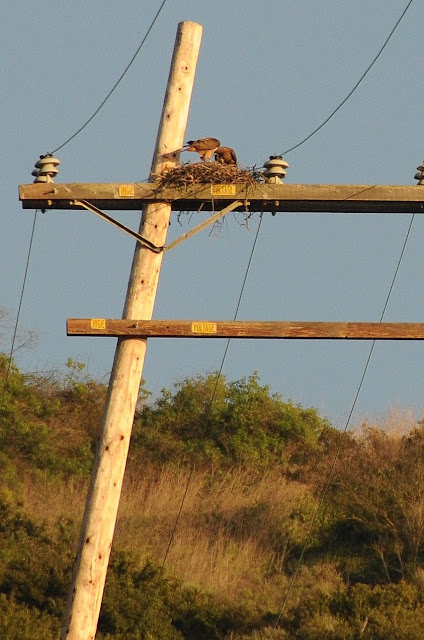 The secret about birdwatching, kooky or not, is that it’s a lot of fun. Not only do you have a reason to get out into the wilderness, but it’s like hunting (without the gore). Who doesn’t like a treasure hunt, an Easter Egg hunt, a scavenger hunt? It’s a rewarding pursuit, too, because you wouldn’t believe the amazing birds hanging out in the bushes and treetops! (On that same hike, we got to watch these nesting Red-Shouldered Hawks fixing up their nest.) After you do it a bit, you can even understand why birders can get obsessed… 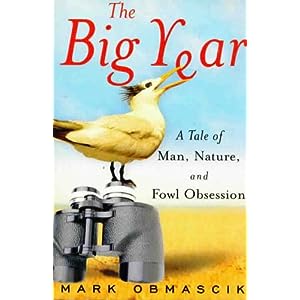 In fact, there’s a movie coming out about birdwatching, and it’s all about the ultimate hunt–and obsession. It’s  based on a classic book about birdwatching, called The Big Year. A talented storyteller/journalist, Mark Obmascik, wrote about The Big Year, and how super birders challenge themselves and travel all over the country to see how many different species they can see in 365 days. It’s nuts, and funny, and a fantastic read whether you care about birds or not.

The movie–due out in the fall–chronicles three men who go after The Big Year, and explores their fascinating backgrounds, the crazy cross-continental road trips, and the source of their obsession. The actors who are playing them speak for themselves: Owen Wilson, Steve Martin and Jack Black. (Think It’s a Mad, Mad, Mad, Mad World–at least those of you who remember Jane Hathaway.)
Someone leaked these images to the media. I found them via BirdChick, one of my favorite birding blogs.

Check out his threads! (And to think that I got chastised during a bird outing for wearing a teal raincoat because it was too bright. Yes, you have to have some tolerance for kooky.)

Of course, I have no idea if this movie will be any good or not. But chances are, if you start to learn your birds, you are probably likely to enjoy it more than someone who has never paid attention to them.

I’m not a great birder, but if you are interested in birdwatching, here’s how I got started:
1. Get some decent binoculars. They range anywhere from $50 to thousands of dollars. I did my research and got the “value” pair, called Nikon Monarch. Totally worth the money if you are at all serious.
2. Buy a good guide book. Our esteemed birding mentor in Laguna Beach, a talented, passionate (also one of the best guitar players out there) guy named John Huessenstamm, recommends Kaufman’s Field Guide to Birds of North America, because it’s so easy to use. Everyone has their favorite.
3. Take a class or go on an outing. Just Google to find your local Audubon chapter or nature center, and they will have a complete listing. I’m not a morning person, but even I could make the 8 a.m. bird walks. If you live in OC, the Sea and Sage Audubon is your ticket.
4. Learn to ID by ear. I took a class on this and love what I now hear when I’m outside! There’s a web site I like, too, called WhatBird, (and Apps) that has pictures and audios of songs. There’s also a huge, new bird songs book with audio recordings called Bird Songs Bible. I love it (a Valentine’s Day score), and it’s come down from $125 to $70.
5. Start dreaming of birding trips! I may not ever take on The Big Year, but it’s a great excuse to travel to some of the most beautiful places in the world! (Our little birding group is going to Joshua Tree National Park in a couple weeks! I hope to post on that adventure!)

So think bird watching. When it hits as the next big thing, you can be among us (kooky) trend-setters!

2 thoughts on “Are You Ready for The Big Year?”