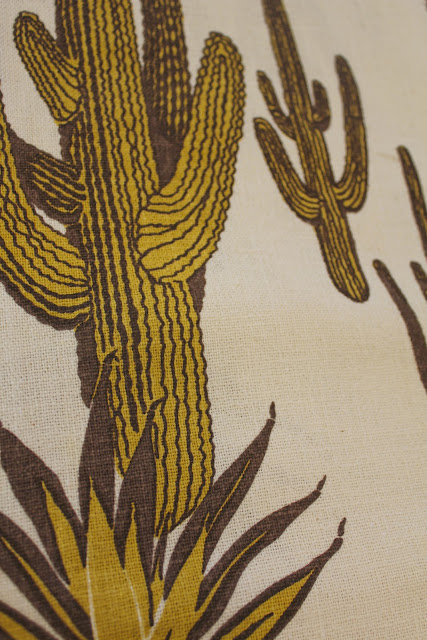 These luscious textiles are by little-known, mid-century silk screen artist Harwood Steiger, who ran a studio for about 30 years in the tiny community of Tubac, Arizona, outside Tuscon. Steiger and his wife, Sophie, made hand-printed fabric on thick linen and focused mainly on desert plants and wildlife themes. 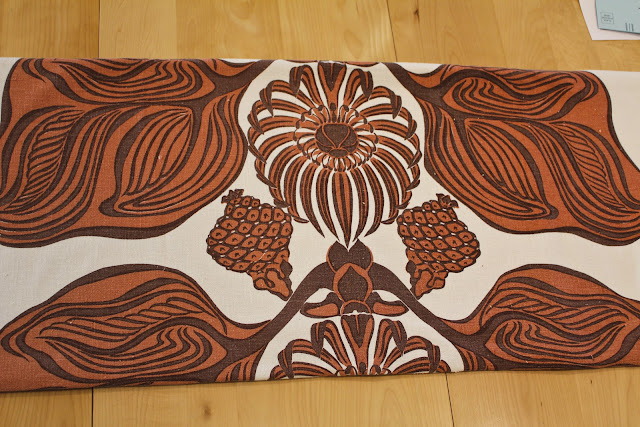 This pattern is called “Tree of Life.” I rarely see fabric with such bold, sensual graphics like this from anyone inside the United States (Usually they are Scandinavian, such as Marimekko (Finland), or famous American designers from the 40s, 50s and 60s, such as Herman Miller or George Nelson.) Not many people have heard of of Harwood (What a great name!). 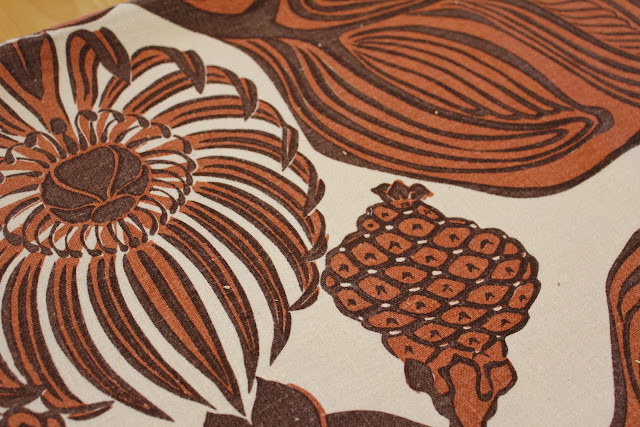 I learned about Steiger from a good friend who had bought some land outside Tubac. She bought some of his fabric at the studio there right before they closed their doors in about 2005. I started looking for Steiger fabric on Ebay, and bought a couple yards at a time. I found one tablecloth at a garage sale in Laguna, so it is around. You also can still find it on Etsy and other online textile stores. But the best stuff is hard to find, and getting more pricey. I would say it averages about $40 a yard now. 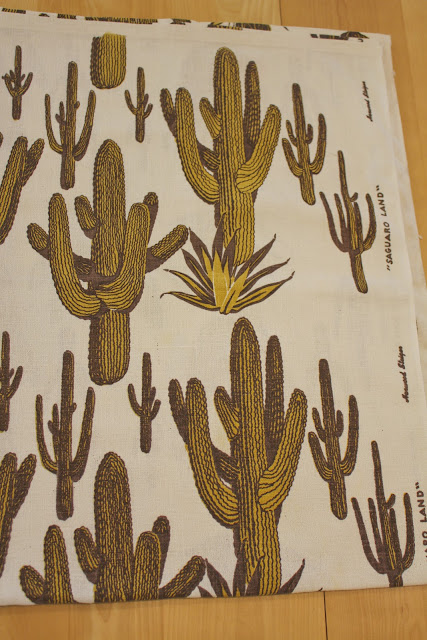 Most of the designs are on bolts of fabric, but many have been sewn up into tableclothes, dish towels, placemats, aprons,drapes, bedspreads, and even dresses. You can just tell that Steiger loved nature and found inspiration in the plants and wildlife of his backyard. His details are amazing, and he has a playful side, too. He signed and named most of his work. Beside desert themes, he made designs inspired by Aztec and Native Americans, Hawaii, and abstract mid-century images. 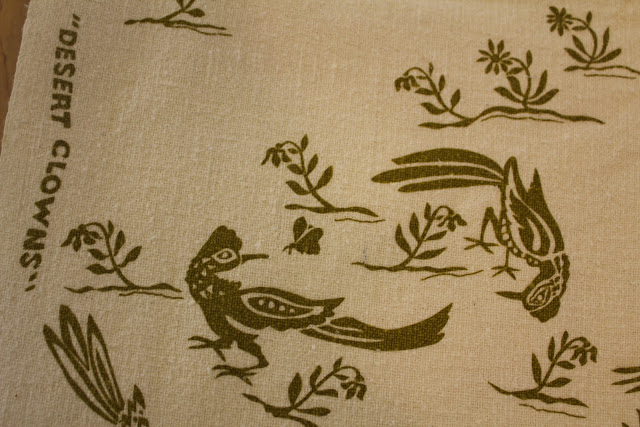 These roadrunners are a bit southwest cliche, but he obviously studied birds and understood the curious, playful nature of roadrunners. Called “Desert Clowns.” 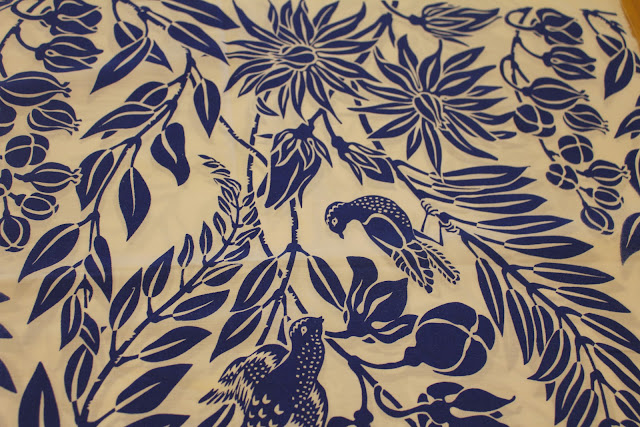 Some of his fabric, such as this one, is on lighter cotton.
I don’t like it as much, but it just depends what you want it for. This pattern is called “Hawaii.” 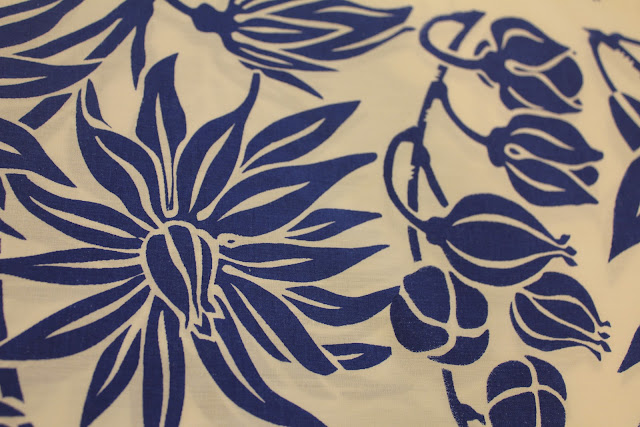 The quality of his lines is amazing! Most of his color schemes are monochromatic,
which emphasize the shapes. 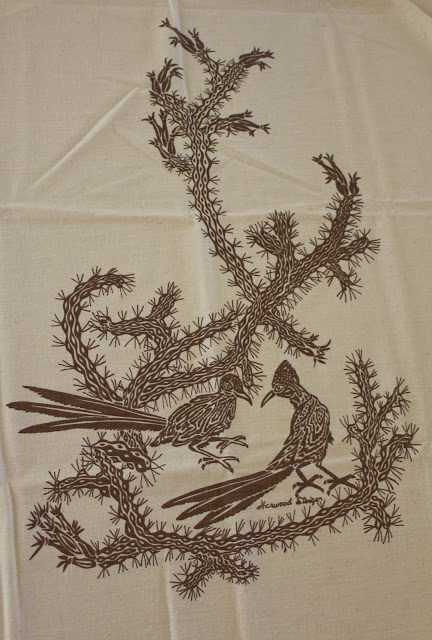 You do kind of have to “get” the desert to appreciate most of his work. Love this budding cholla cactus! 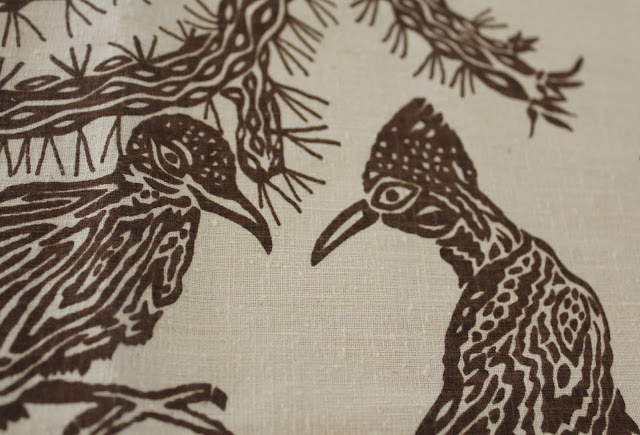 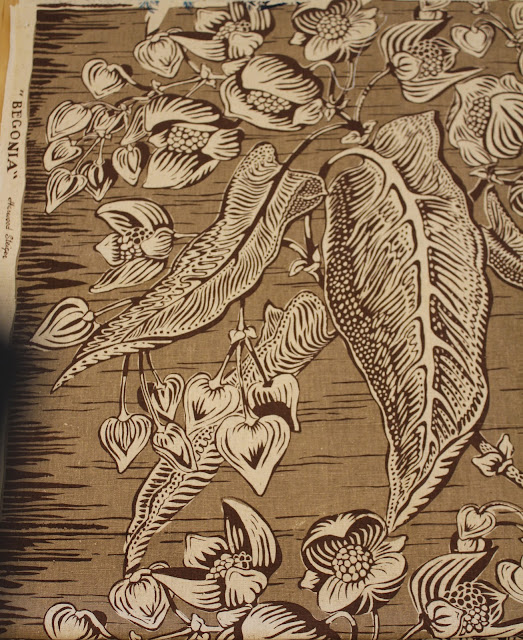 Now this and the following fabrics are from my friend’s collection. This is one of my favorites. We guess that the oldest (and our favorite) work is on this thick linen cloth. This one is called “Begonia,” a Hawaiian flower. Steiger, who was also an accomplished painter, was originally from New York. 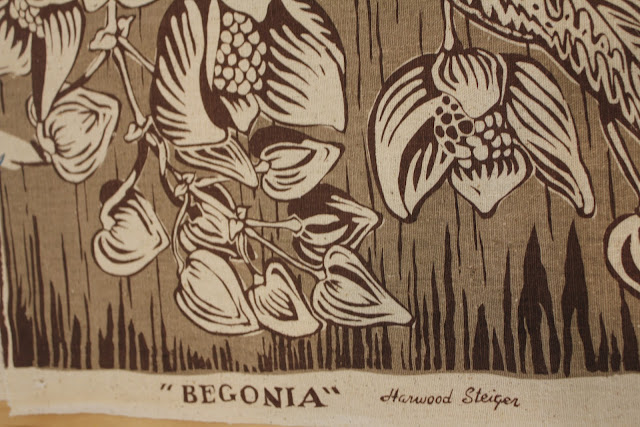 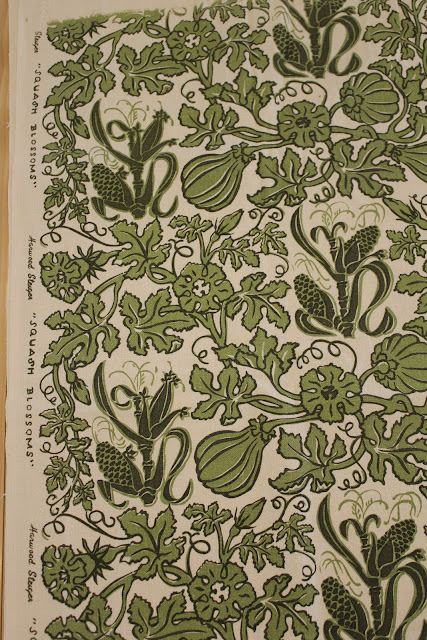 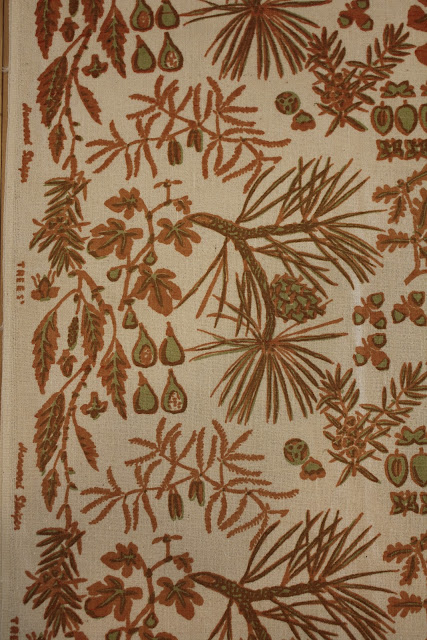 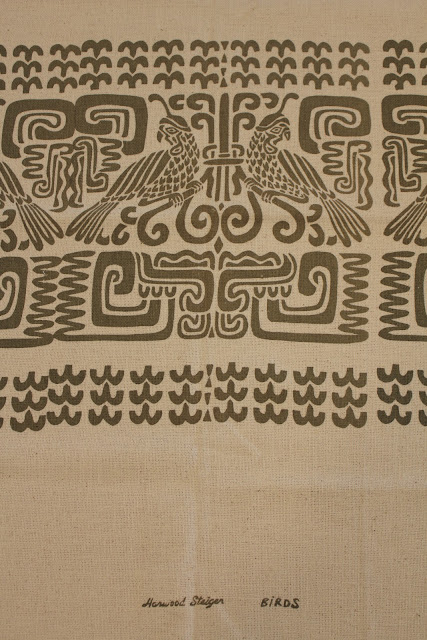 He did quite a few Aztec designs, and I find this one a funny blend of Aztec and desert quail! One collector laughed at “snowbirds” from the midwest who picked up his fabric while wintering in Arizona, who called his roadrunners “peacocks” and images of some barrel cacti “pineapples.” That is really funny to me! 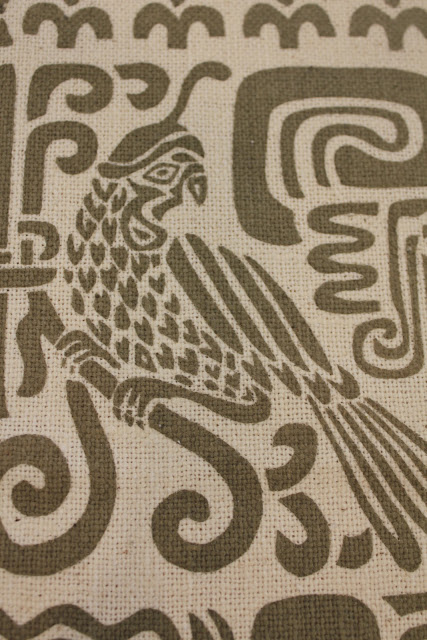 Here’s a photo of  his studio in Tubac, Arizona. A woman named Cynthia deVillemarette, who wants to write a book about Steiger, has started a blog–called the Harwood Steiger Book Project–about him. She generously allowed me to use her photos of his studio and of Harwood (below right) at work making silkscreens. 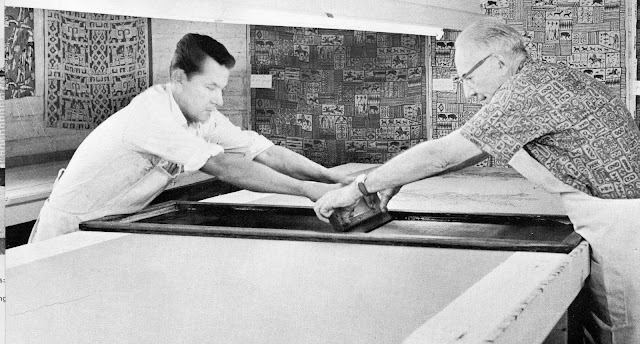 There’s not a lot of info on the Web about Harwood, but I did learn that half of his estate/collection was donated to the American Textile History Museum in Lowell, Massachusetts. They have many of his silk screens, and even his huge tables, which are displayed in the silk screening room of the museum, along with choice examples of his fabric. At first, I felt bad telling you about this amazing artist, without being able to direct you to somewhere to learn more about him. So I was thrilled to learn about this museum. He had no heirs, but it’s so forward thinking that his relatives donated his work to this museum, and apparently a university somewhere. (Cynthia will have to figure all that out for us!) 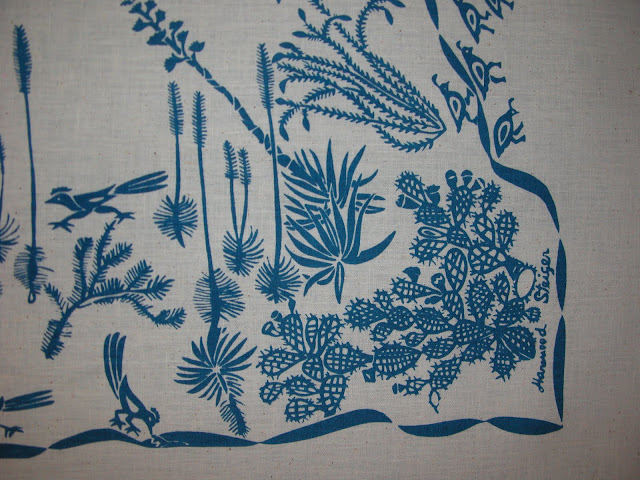 Here’s some fabric Cynthia featured on her blog.
Check out how that little roadrunner has chewed through the border! I have the feeling that Harwood would have been a hoot! Here are some more random images of fabric that has been up for sale on Ebay or Etsy. Some Fish Hook cacti. (Not pineapples!)
Click here to see one of their amazing Steiger fabrics in the museum’s collection that is of stylized canyon lands. Click HERE to link to their catalogue of Steiger pieces. This is typical of his dishtowels, where he would draw small images and label them.
I will stop here. I am so drawn to his work, and am grateful to learn that others have taken steps to collect and preserve it. The cool thing is that you, too, can keep a look out for it, and maybe score your own piece of Harwood’s work! Good luck!