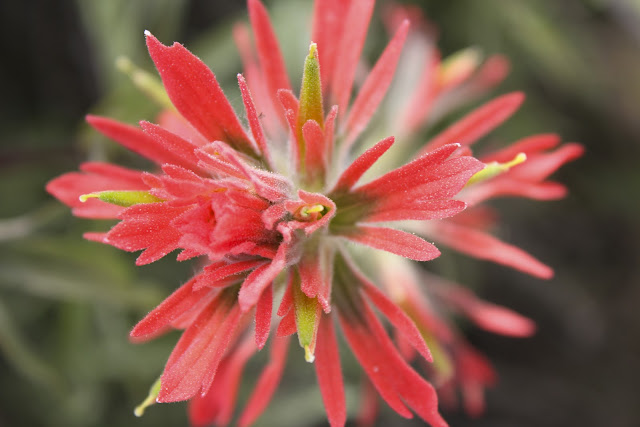 I missed the action of the last cyberspace “Bloom Day,” but not this month! My idea was to take a hike along one of our local trails and check out what wildflowers are out. And man are they out! This is one of the earliest, and always a delight to see: Indian Paintbrush! Besides the early explosion of blooms, my dog, Jenny, and I stumbled upon another surprise at the end of our little hike… 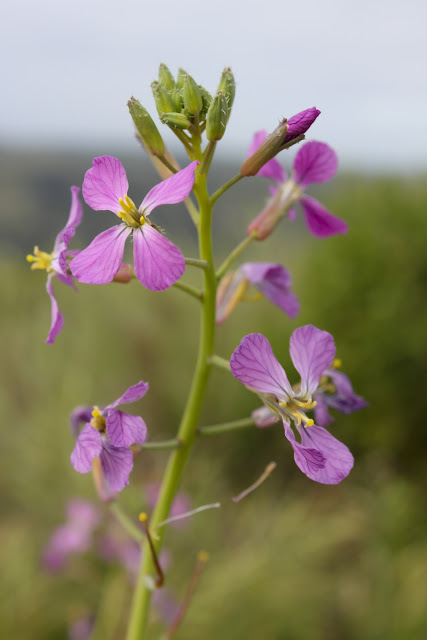 Thanks to a call out by Emeryville gardener, RootedinCalifornia, this is a wild radish, an invasive, non-native. (Looks a lot like my bolting arugula.)
I  guess we’re not supposed to like it… 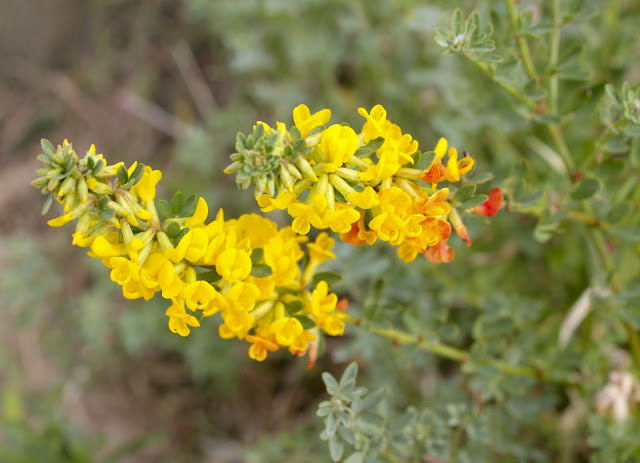 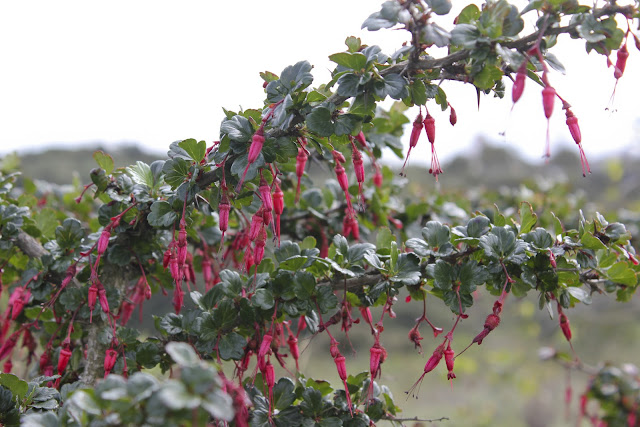 This was a giant bush with these fuschia-like blooms dangling off it. (Thanks to FarOutFlora, who has nailed this month’s Bloom Day with breath-taking photos, this is a Fuchsia-flowering Gooseberry.)
The hummingbirds were swarming before I poked my camera into it. 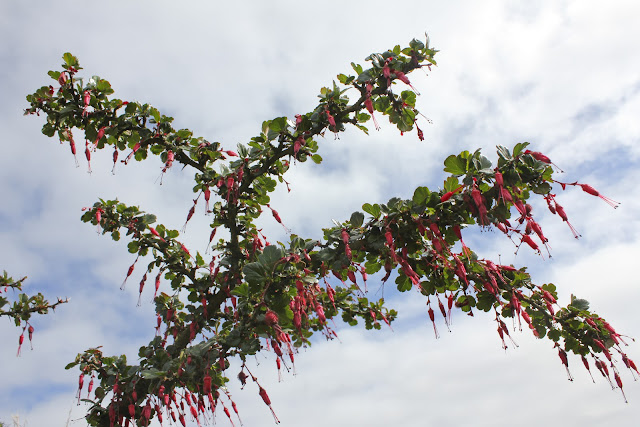 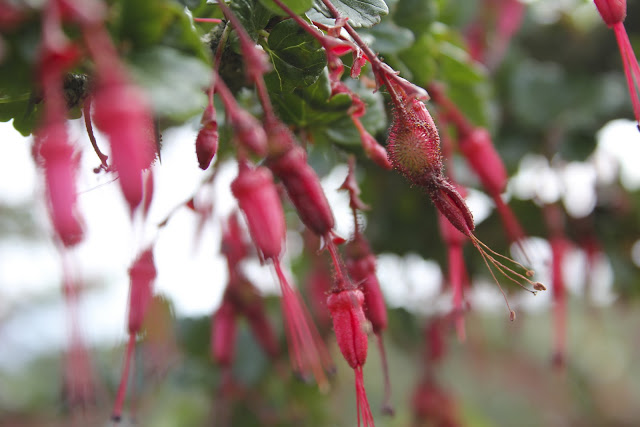 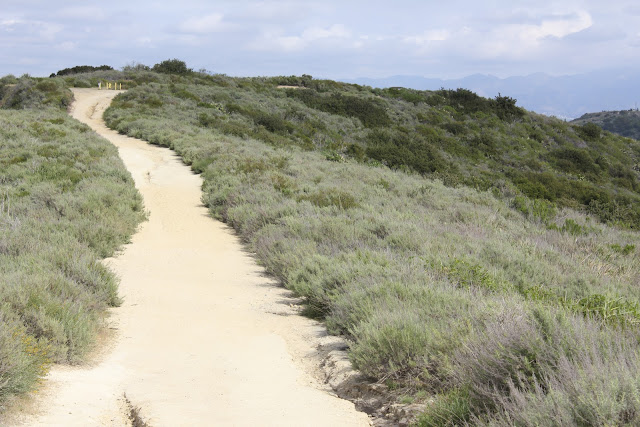 So you have some bearings, this is the trail that leads into Aliso Woods Canyon. The trail head is at Alta Laguna Park in Laguna Beach. I found all these wildflowers growing just off either side. 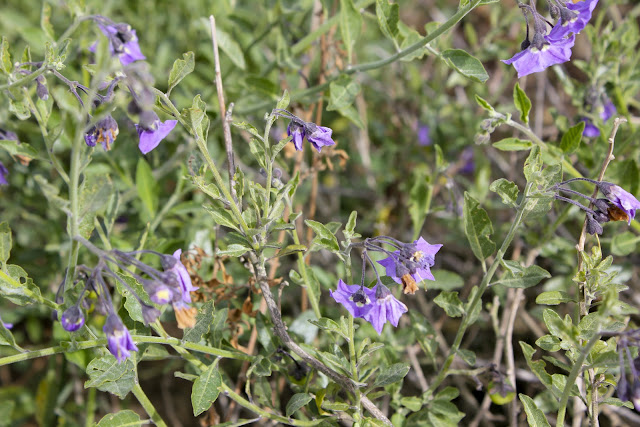 Thanks to a knowledgeable new blogger friend from northern California, at RootedInCalifornia, this is a Nightshade, either Purple or Blue Witch. 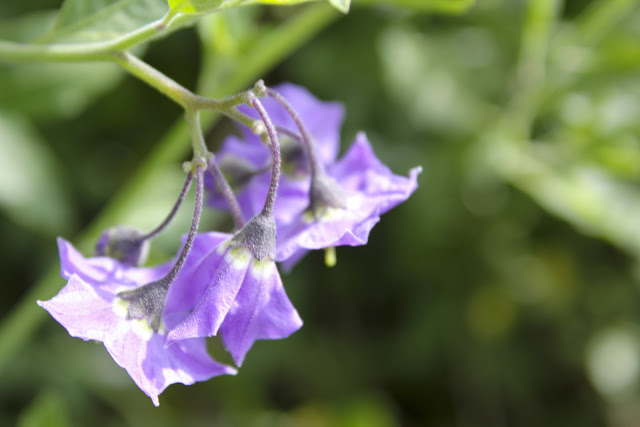 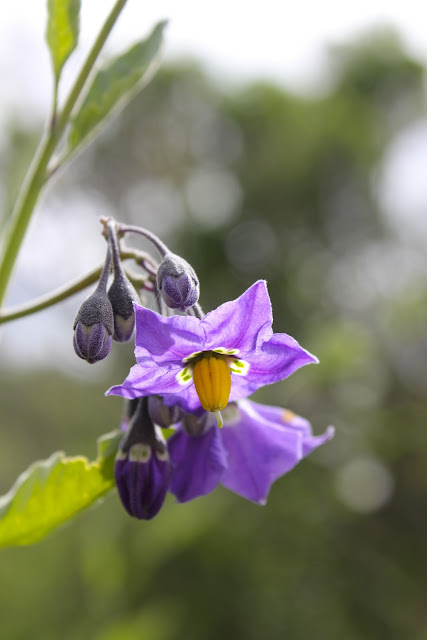 You have to get underneath these to see the front of the flower. 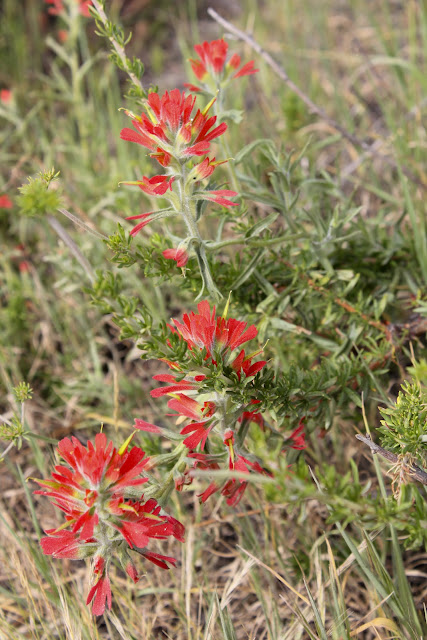 Back to the Indian Paintbrush. 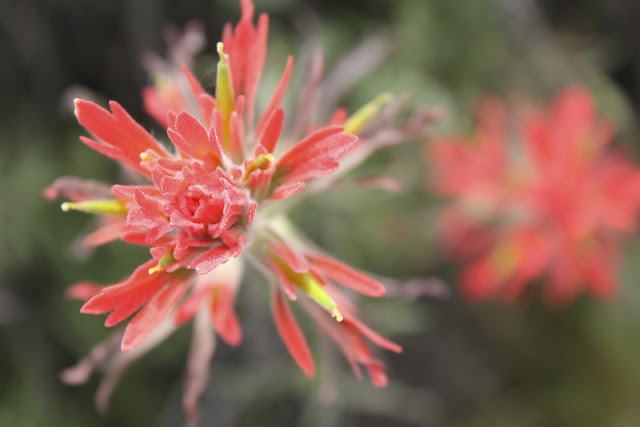 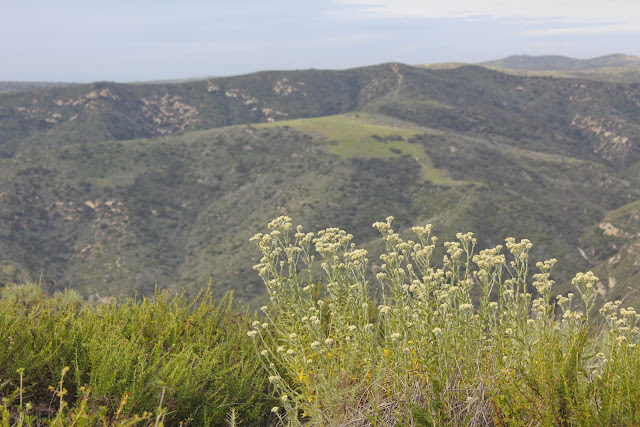 This trail is at about 1,000 feet elevation. This is looking north. The ocean is behind us. We’ve had a lot of rain and then warm sunshine, so everything is green. More rain moving in right now. Those are California Everlasting just starting to burst open. 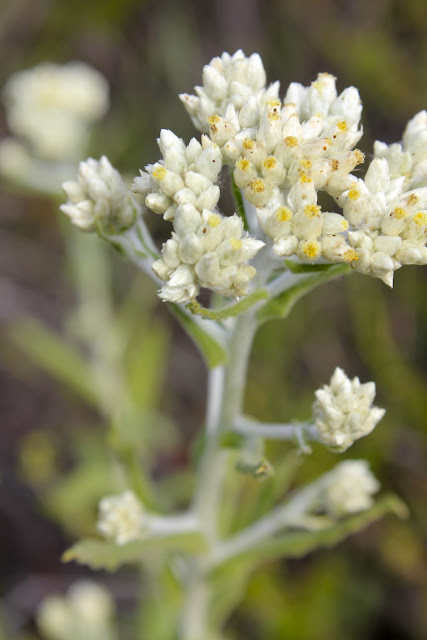 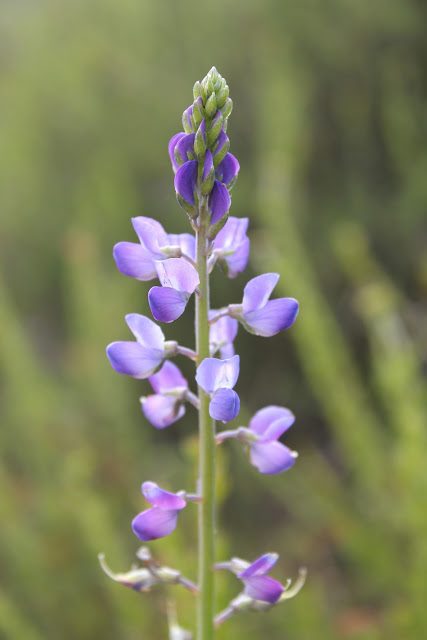 Finally I found a little spike of Lupine. It’s usually one of the first. 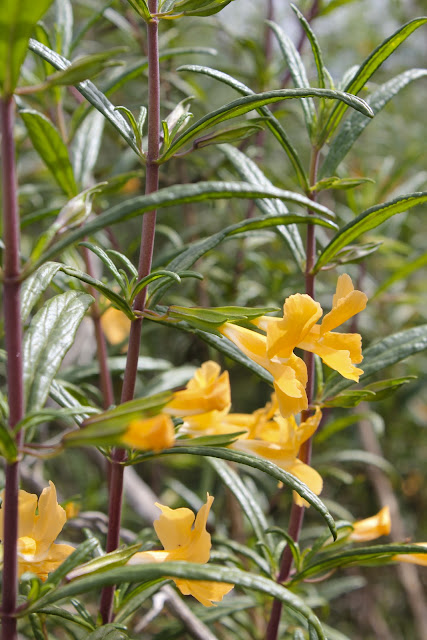 This is where the hike got a bit sketchy. I was taking pictures of this Monkeyflower, and Jenny had run along ahead of me. 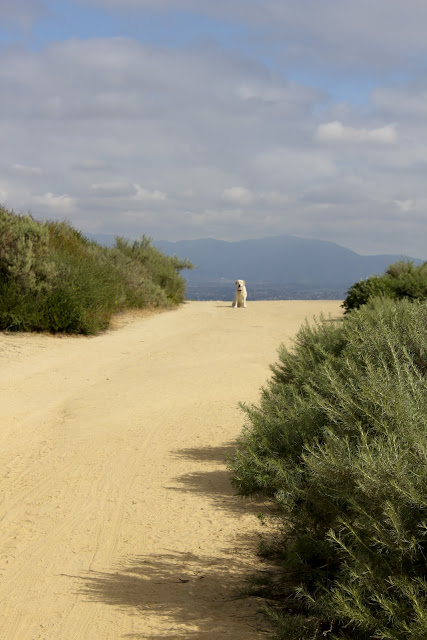 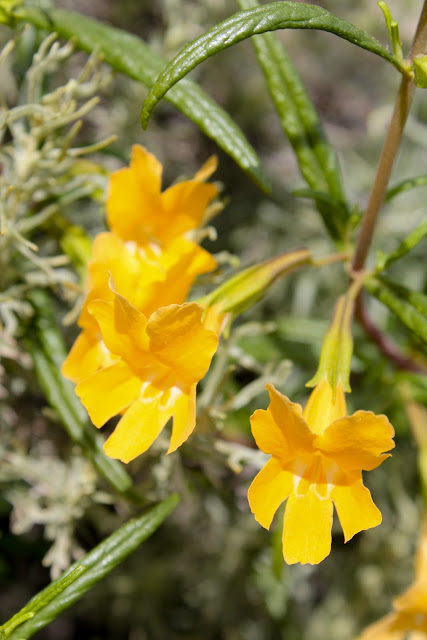 So I get down closer to take this photo of the Monkey flower, and I hear a guy shout to me, “Hey, is this your dog?” It was a mountain biker who had stopped between me and Jenny. I told him yes. Then he said, “There’s a snake by your dog.” We’ve lived and hiked here with our dogs for about 15 years, and run across many snakes, most rattlesnakes. Usually you can see them stretched out across the road sunning themselves, or coiled alongside. In winter, they stay put because it’s too cold. I was still in my winter mode… 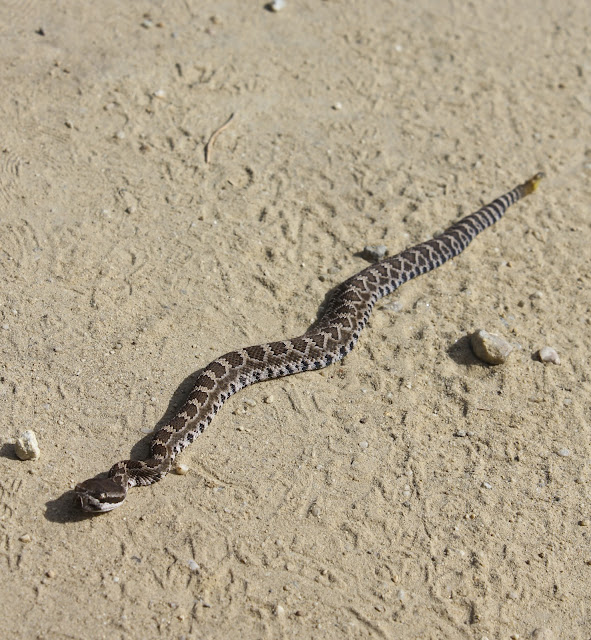 The snake was tiny, a newborn. This photo makes it look big. It was the size of a pencil. When the mountain biker pointed it out to me, it just looked like a little twig. You probably already know this, but baby rattlers are more dangerous than the big ones because they release more venom when they bite. 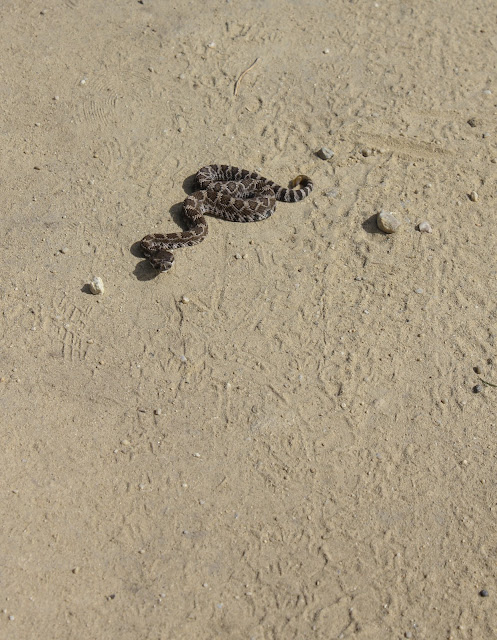 The mountain bike guy and I tried to chase it off the trail by stomping next to it.
(They don’t see well and go by vibrations.) This one was so young the rattle was hardly defined and a yellow color. These creatures are really beautiful, but I was totally shaken by how impossible it was to see, and how close Jenny or I came to stepping right on it. 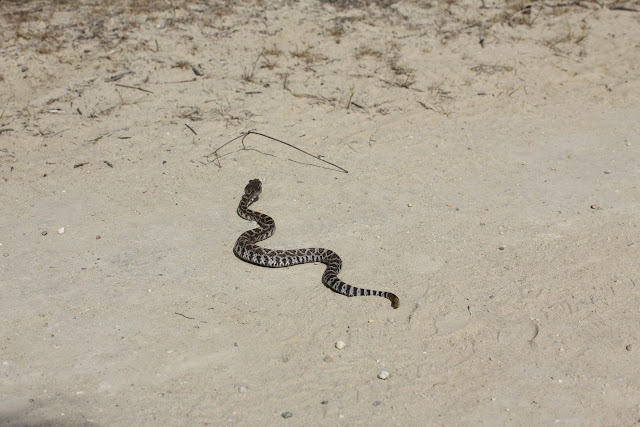 Finally, the little guy scooted back into the chaparral. I put Jenny on a leash and headed home. I felt terribly guilty how close she had come to getting bitten. Moral of the story: Wildflowers are out, spring is here, and so are the snakes!! Enjoy the sights, but watch where you step! 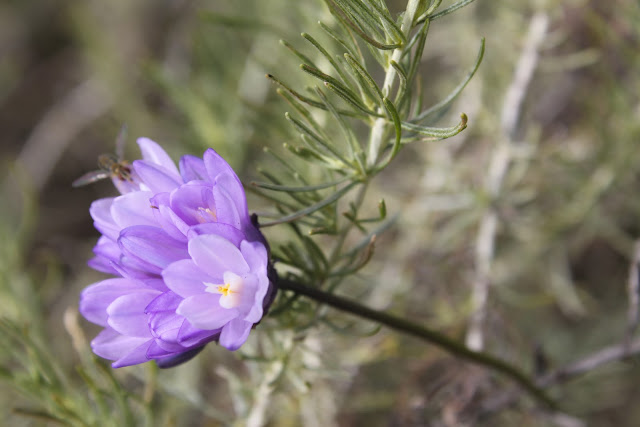 Just wanted to leave you on a brighter note. (I should have remembered this one–how can you ever forget  this native bulb called Blue Dicks–but that same nice guy from RootedInCalifornia passed along the ID.)

Coming soon to fields near you!!

16 thoughts on “Bloom Day Goes A Bit Too Wild!”