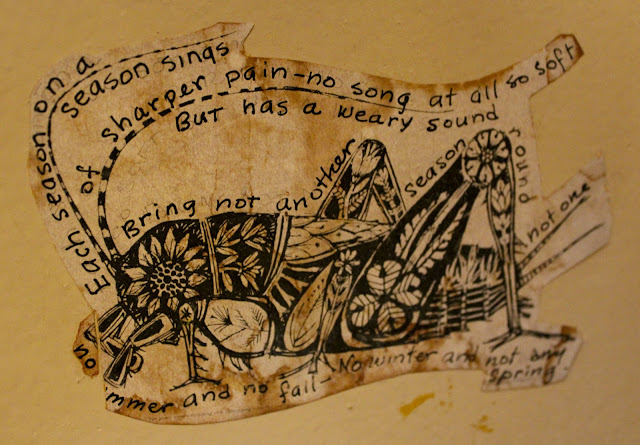 This cricket is one of the images that Hortense Miller glued onto the wall of her little guest bathroom in her long-time home, located on the edge of a Laguna Beach canyon. In my previous two posts, I shared a tour of her gardens, and then inside her mid-century home. (I know you may have had your fill of Hortense at this point, but I’m still enamored.) I found this decorated wall as intriguing (and revealing) as any of her other creations, which range from her exotic and native plantings to her visionary design, artwork and furnishings of her home. 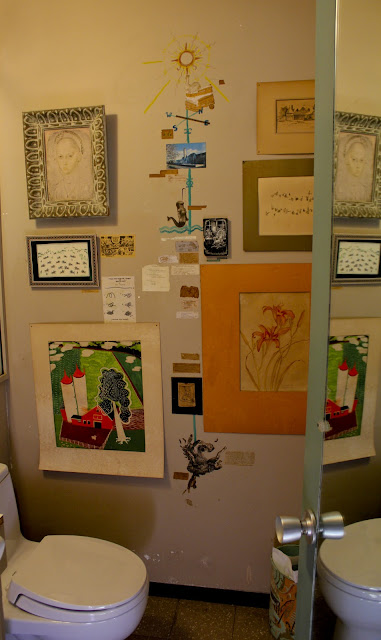 To appreciate this wall, it helps to know a bit about Hortense:  she was an intellectual, feminist, environmentalist and lifelong vegetarian (no big deal these days, perhaps, but she was born in 1908–and died at 99 several years ago). She kept her vow not to have children (concerns about population control), but broke her pledge not to marry after meeting Oscar, a lawyer 20 years her senior. The couple built their home in 1953, but he died six months later.
During the following half century, Hortense lived alone in the home, made artwork, and tended her garden. 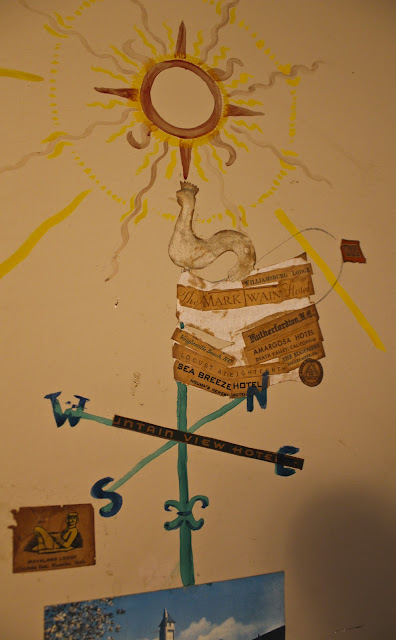 Again, I don’t want to read too much into this, but it’s interesting how the images and quotes seem to reflect her life–especially this vertical “story,” which starts at the top with the sun and ends at the bottom with the image of Icarus. Hortense and Oscar traveled all over the world. The weather wave has the names of hotels around the world glued underneath it, possibly from the hotel stationery. 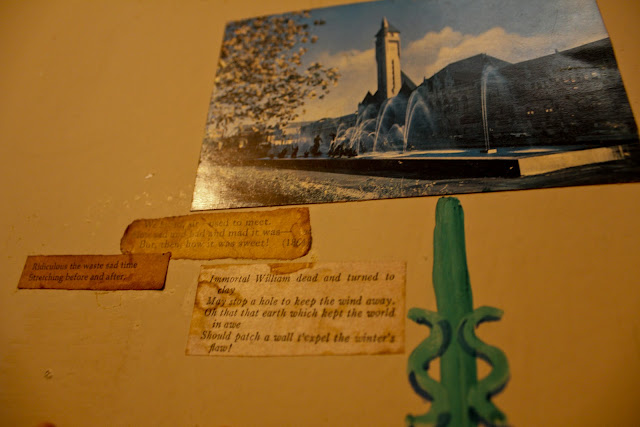 I would love to know where this postcard was from, obviously a special spot. And I don’t know if you can read any of these clippings, but most of them seem pretty mournful, kind of like a lament.

Immortal William dead and turned to clay,
May stop a hole to keep the wind away.
Oh that that earth which kept the world in awe
Should patch a wall t’expel the winter’s thaw!

From a quick Google search, I think this quote was from G.B. Shaw. 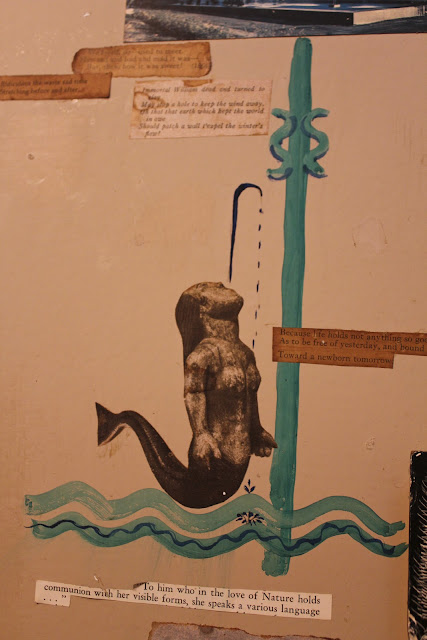 Hortense has mermaids throughout her home, especially in her paintings and murals.
Although she eschewed religion and was not superstitious, she believed they represented bad luck.
Here is another one (for any of you readers covered in snow!):
Summer was a hedonist–
undisciplined, gregarious,
rose-lipped, bird-kissed.
But winter walks alone
against the wind,
stoic, songless, cold as stone. 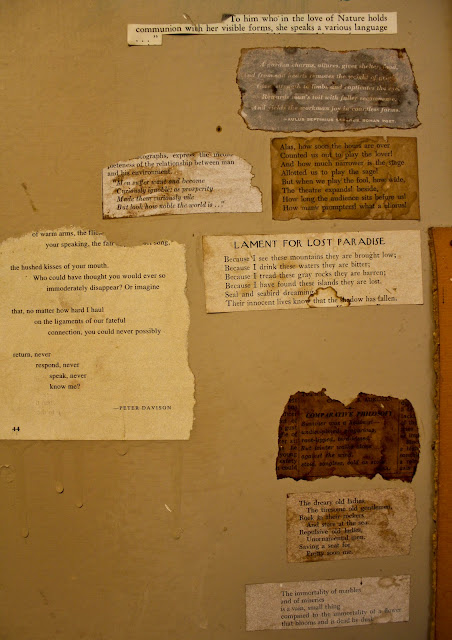 the hushed kisses of your mouth,
Who could have thought you would ever so
immoderately disappear? Or imagine
that, no matter how hard I haul
on the ligaments of our fateful
connection, you could never possibly
return, never
respond, never
speak, never
know me?
Peter Davison 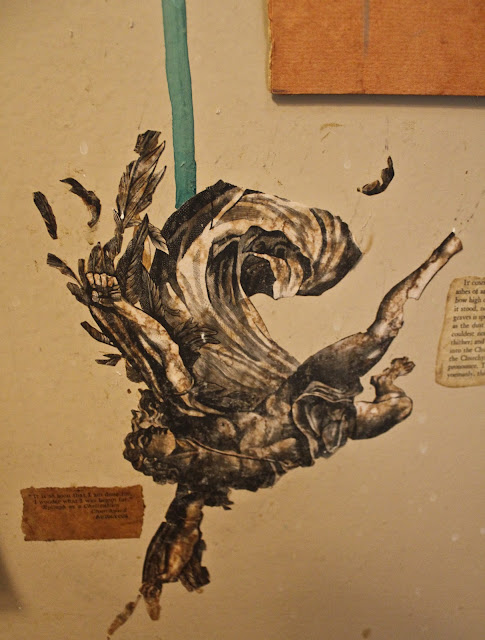 This appears to be an image of Icarus, the guy who tried to escape Crete with wings made of wax, but then ignored his dad’s advice not to fly too close to the sun…Hortense was into mythology and has allusions throughout her artwork.
This is another poem on her wall about gardens:
A garden charms, allures, gives shelter, food
and from sad hearts removes the weight of grief.
Gives strength to the limbs,
and captivates the eye,
rewards man’s toil with fuller recompense,
and yields the workman’s joy in countless forms.
Aulus Septimus Sepenus, a Roman Poet 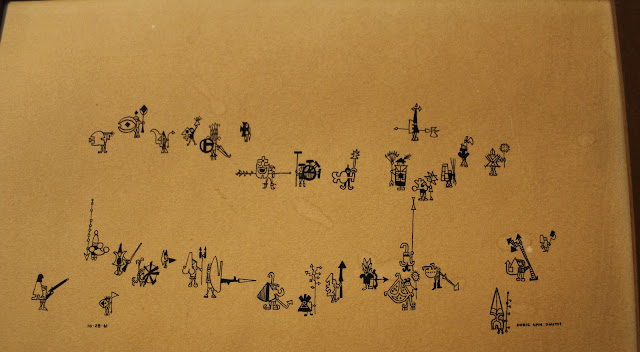 A cryptic ink drawing by “Doris Ann Smith,” whoever she was. No luck with Google. 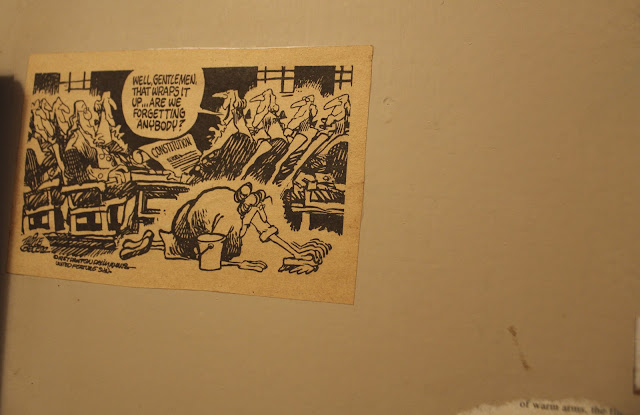 She was into women’s rights from her early years. Right on, sister! 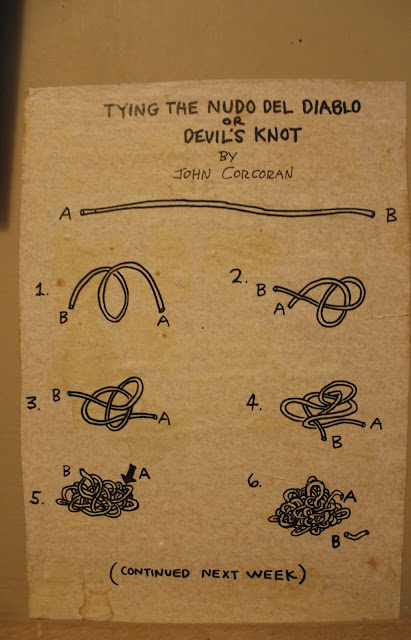 I guess this is funny. I’m kind of dense. 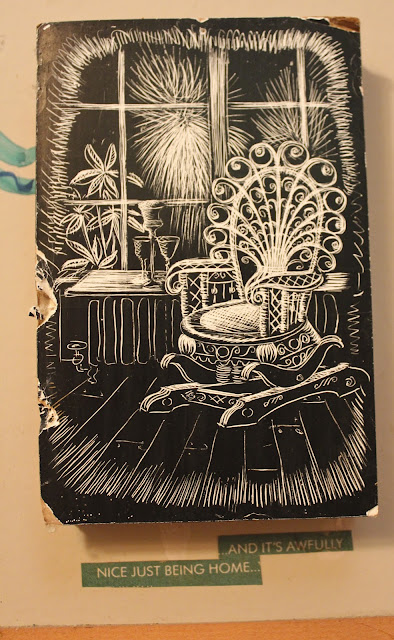 OK, after seeing her home and gardens, I totally get this one!!! 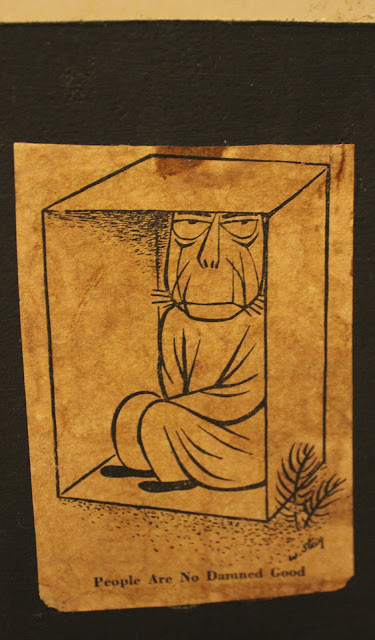 And after my short visit with her about a decade ago, when she was nearly 90, I could see this quality about her. (Hortense didn’t leave her home and gardens very often–but who could blame her?) However, even though she could be a bit cranky, especially during her later years, she was known as being very friendly and engaging and always willing to share her home and gardens with visitors. She clearly had a sense of humor! 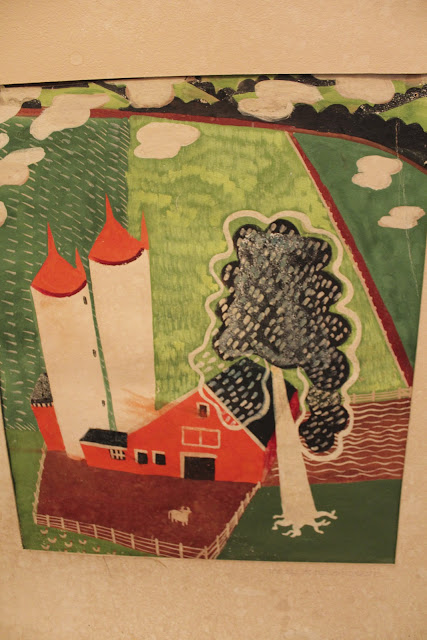 On a brighter note, this lovely little farm scene. 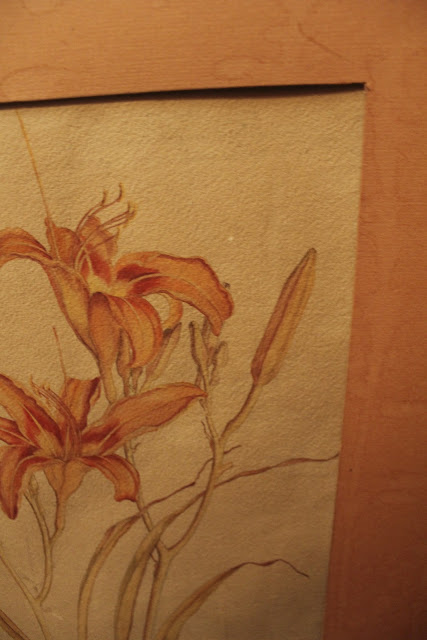 And this watercolor of some lilies. 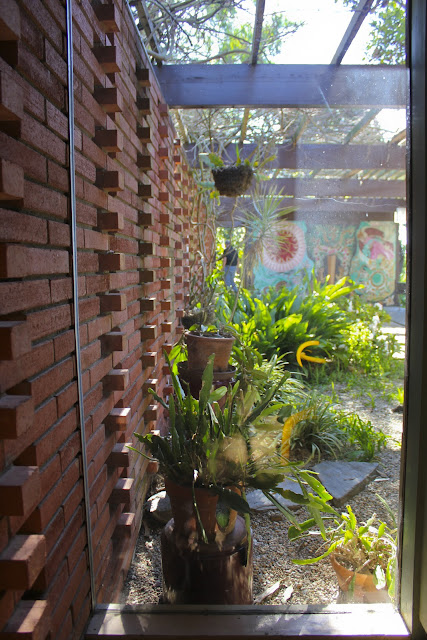 This tiny bathroom, which was isolated from the rest of the house, was located off a narrow hallway just to the right here.There was also a guest bathroom and a master bath.
I can’t help think that, like many of us, she did some of her best thinking here!
So that’s enough of Hortense Miller–at least for now.
(Click this is you want to see tour of HOME. Click here if you want tour of her GARDENS.)